Can teachers unions help improve the quality of education in the Arab world? 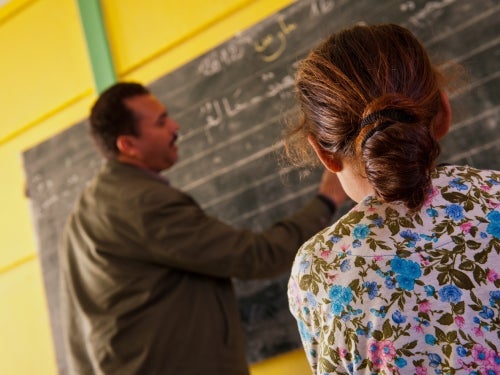 In many countries in the Middle East and North Africa (MENA), and in fact around the world, teachers—who play a pivotal role in any effort to improve education quality—have not been officially represented in the design of key government programs aimed at education reform.

One of the main obstacles is that the organizations that represent teachers, their unions, often have an antagonistic relationship with governments. But that may be changing.
​
A growing body of global experience shows that constructive collaboration with teachers unions can lead to positive outcomes for students. There is a new movement underway known as Professional or ‘New’ Unionism focused on building on this relationship. We held a conference in Casablanca to see what this new movement might mean for the Arab world, and the results were eye opening.

We got together with  ALESCO and the Queen Rania Teacher Academy, both partners in the Arab Regional Agenda for Improving Education Quality (ARAIEQ), to bring together 40 union representative from 11 Arab countries. This was the first of its kind in MENA, and it revealed a shift in how the region’s teachers unions see their role. The potential for a move toward the new global phenomenon of progressive unionism was visible in a common commitment to improving education quality, along with seeing themselves as partners for reform – or, indeed, as the source of reforms.

The conference also included a number of international voices from the new movement. Nina Bascia, from the University of Toronto, asserted that the relationship between governments and teacher unions need not necessarily be marked by either confrontation or alienation. Teacher unions have in fact been successfully adopting a third strategy—being proactive and reaching out to other stakeholders, especially parents—in a number of countries. Bascia spoke of the Alberta Teachers Association in Canada who launched an aggressive advocacy program for education quality and eventually won additional funding for the sector.

Mark Simon, a teachers union leader from the US, advocated for expanding the role of unions beyond protecting their members to improving education and advancing the profession as well as connecting to students and their families and promoting equity.

“The goal is to have teachers unions adopt a more constructive, objective and participatory approach in their relations with governments and with their own constituencies,” said Simon, “so instead of saying no to reforms, they should instead say what is wrong with the reforms and keep a critical eye on the performance of their own affiliates. This will not only help them improve their public image as effective civil society actors striving to improve teaching quality, but will also consolidate their position to claim better work conditions.”

Drawing on the case of Montgomery County, near Washington, DC, Simon noted that Montgomery Country Public Schools established a teacher Peer Assistance and Review system (PAR), which is overseen jointly by management and the union. Its main feature is a team of experienced and well qualified teachers (consulting teachers) who are tasked with supporting teacher improvement as well as teacher evaluation (they may also recommend continuation or termination of contracts). The PAR system achieved positive results with lower teacher turnover, improved student results and narrower achievement gaps.

These were interesting cases, but I was really inspired by the promising experiences that also surfaced from within the MENA region. In Morocco, for instance, the Democratic Labor Federation’s teacher union teamed up with various international partners to try to reduce the number of school dropouts in poor areas through training and support to teachers, students, parents and local NGOs. Another good example was from the Kuwaiti Teachers Association, which has now put in place a program for professional development and teaching support material. And in Egypt, the teachers union has an ambitious plan—to build teacher training centers in every governorate.

Three specific directions for the future are emerging: increasing teacher participation in professional development activities; taking a leadership role in facilitating and disseminating education innovation among practitioners in schools; and contributing to a richer and better informed public debate on education.

However, constructive engagement between governments and unions in MENA on raising education quality is still the exception rather than the norm. Secondary school teachers have been on strike for several days in Tunisia this school year. Their union representatives claim that they have a better understanding and knowledge of what is actually happening in schools and classrooms thus deserve to be a full partner in any education reform. “We have a vision for the sector and have developed a comprehensive set of reforms,” said Noureddine Chamengui from the Tunisian General Labor Union (UGTT), “We want to have a seat on the table.” Clearly, there is still a long way to go in many countries. I had the pleasure to represent ALECSO at the event co-organised by the WB, ALECSo and QRTA
and given the feed back of the participants, and discussions, I think the active , collaborative, trustful cooperation between gov officials and trade unions are a must for improving educaztion quality. both sides need to find common ground to work toghether, for the good of all, and examples have been given in Casa .
Thank you
Monia Rais Mghirbi