By Mohamed Abdallah Youness, Assistant Lecturer in the Faculty of Economics and Political Science at Cairo University.

A Cairo-based academic traces links between climate change and the instability affecting the Middle East and North Africa. 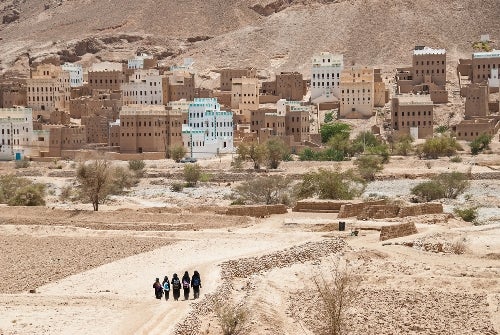 The Middle East region’s share of greenhouse gas emissions does not exceed that of more developed countries, but it is among the regions that have been most adversely affected by the consequences of climate change so far, with droughts and desertification already causing a decline in agricultural production, falling water levels in rivers, and the erosion of the agrarian revolution, stoking conflicts over resources.

According to the 2013 study by John Waterbury, “The Political Economy of Climate Change in the Arab Region,” droughts that occurred prior to 2011 led to the devastation of agricultural land on which at least 800,000 people depended in eastern Syria, and resulted in the death of at least 85% of their livestock. This, in turn, led to the displacement of the inhabitants of rural areas who went to seek employment in Syria’s larger cities, where they formed disenfranchised belts of disparate communities surrounding Hamah, Homs, and Daraa. This contributed to the outbreak of conflict in Syria, following President Bashir al Assad use of his armed forces against them.

A similar situation occurred with respect to the conflict in Darfur, in western Sudan, where rainfall had declined by 30% and agricultural production had fallen by 70%, while the average annual temperature rose by 1.5 degrees, contributing to conflict between pastoral and agricultural tribes over the use of land for  grazing livestock or growing crops.

The importance resources hold for terrorist organizations is emphasized by the efforts of the so-called Islamic State, IS or ISIS, to capture the Mosul and Fallujah dams in Iraq, as well as the Iraqi regions of Zumar, Sinjar, and Rabiah, in order to gain control of the waters of the Tigris and Euphrates rivers as well as water sources in Syria, and fertile regions suitable for agriculture in both countries.

A study by Aaron Sayne, published by the American Peace Institute in June 2011, states that the emergence of Boko Haram in Nigeria can be traced to environmental developments and climate change, linking the founding of Boko Haram by Mohammed Marwa in the 1980s to the proliferation of victims of environmental crises in Nigeria, who lacked food, shelter, and other basic necessities of life. Boko Haram’s ranks then swelled after the migration of Chadian farmers as a result of droughts and desertification in Chad.

Many studies have pointed to the link between climate change and the outbreak of the Arab revolutions. “The Arab Spring and Climate Change,” published in 2013 by the Center for Climate and Security in Washington, says it was the failure of governments to meet their citizens’ basic needs, address climatic issues like droughts, desertification, and power shortages that led many people to take part in the political protests of the Arab Spring.

Other environmental protests that took place were in the cities of Ouargala and Ain Saleh in Algeria in March 2015 against the extraction of shale gas. In Israel in 2013, protests in the Adulam region were led by several organizations, such as the Israel Union for Environmental Defense, the Society for the Protection of Nature in Israel, and the Green Zionist Alliance.

In 2011 and 2012, Egypt saw a wave of environmental protests, such as those against the MOPCO fertilizer plant in Damietta, and protests by the residents of the village of Fares near Aswan against gas drilling practices. In 2014, a campaign called “Egyptians against Coal” was launched in Alexandria to confront the pollution caused by the use of coal by the Lafarge Cement Company. In March 2015, a number of environmental groups threatened to hold a sit-in following the government’s announcement that it would allow the use of coal in cement factories.

In conclusion, climate change has increased threats to human security. Most environmental studies concur that is it likely climate change will lead to the numbers of displaced persons and refugees in the Middle East increasing. It is anticipated that the rise of sea levels, particularly in the Mediterranean, will displace 3.8 million residents of the Nile Delta and other coastal regions to internal areas, according to a report issued by the World Bank in November 2014. Coastal cities, such as Alexandria, Egypt; Benghazi, Libya; and Algiers, Algeria, may all be subjected to flooding if the Mediterranean rises.

The World Bank report, “Turn Down the Heat: Confronting the New Climate Normal”, states the Arab region is witnessing the evaporation of its scarce water resources, particularly in the Tigris, Euphrates, and Jordan rivers, and the Sea of Galilee, as well as a 30% decline in crop yields in Egypt, Jordan, and Libya. Likewise, a report by the Arab Forum for Environment and Development states that 12% of the arable land in Egypt is subject to multiple, climate-related risks.

Threats resulting from climate change extend beyond the domains of environmental, social, and human security, and overlap with conventional security and internal stability. These confirm the need to increase the pressure on industrial and other rapidly growing economies in countries that contribute the largest share of greenhouse gas emissions; to participate actively in countering its dangerous consequences; to change perceptions of the risks related to environmental security among the political and media elites; find alternative ways to address the crises of food and water shortages; and develop policies to deal with the waves of internally displaced persons that are anticipated.
Topics
Climate Change
Environment
Countries
Algeria
Bahrain
Djibouti
Egypt
Iran
Iraq
Jordan
Kuwait
Lebanon
Libya
Morocco
Oman
Qatar
Saudi Arabia
Syrian Arab Republic
Tunisia
United Arab Emirates
West Bank and Gaza
Yemen
Regions
Middle East and North Africa