Counting the costs of the war in Syria 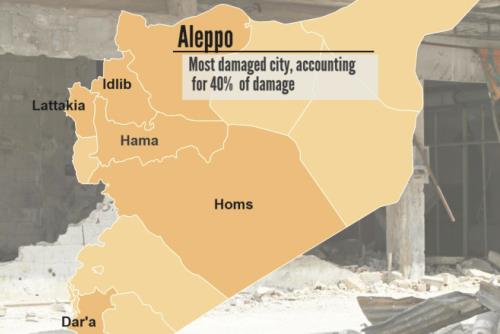 Measuring the impact of war on Syria is an ongoing challenge as the conflict continues  to devastate the lives of people and their communities. However, efforts to understand the nature and extent of the damage are essential for identifying immediate needs, and for preparing reconstruction plans that can be launched at the first sign of peace.

Working with partners, including the GFDRR, the World Bank has conducted a preliminary Damage Needs Assessment (DNA) for Syria. The DNA surveyed seven sectors in six Syrian cities--Aleppo, Dar'a, Hama, Homs, Idlib, and Latakia. The sectors in the assessment include: housing, health, education, energy, water and sanitation, transport and agriculture.

The latest Quarterly Economic Brief has collected some of the initial results. The total damage for six Syrian cities is estimated between US$3.6 – US$4.5 billion . Housing accounts for 65% of the total damage. 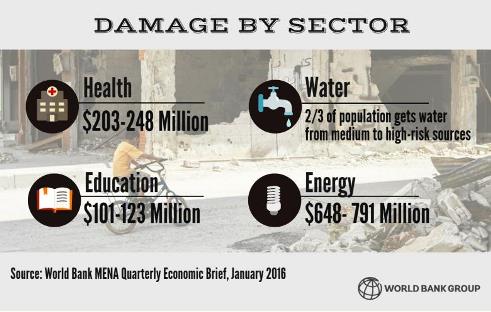 Of the six cities in Syria, Aleppo is the city most affected with 40% of the estimated damage . Latakia is the least affected city surveyed, but its infrastructure and services are under increased pressure by internally displaced people arriving in the city.

Health: The DNA shows that the health sector is in dire condition due to damaged infrastructure, and a shortage of both supplies and health professionals. Aleppo saw almost half of the total damage in medical facilities of Syrian cities surveyed . About 1/3 of the 780 health facilities, from hospitals to pharmacies, have been damaged .

The total cost of the infrastructure damage to the health sector, for six cities, is estimated between US$203 to US$248 million by the end of 2014. Since then, the situation has deteriorated further. The UN reports, in the summer of 2015 alone, health facilities in Syria were attacked over 70 times  preventing many patients from accessing these centers.

Education: Of 1,417 institutions ranging from Pre-Kindergarten to Universities in six cities, 14.8% have been damaged in some way. These schools are mainly primary and secondary schools. Up to the end of 2014, the total cost of damage to Syria's education infrastructure is estimated at S$101 to US$123 million .

With more than 16,000 primary and secondary schools across Syria, the damage to the schools nation-wide is likely to be substantial. Moreover, according to a UN report, 18% of Syria’s schools have ceased to function as schools and are inhabited by IDPs  (internally displaced people) instead.

Energy and Water: The situation has deteriorated further by the ongoing fuel and electricity shortages. About 2/3 of Syrians obtained water from medium- to high-risk sources . According to the UN, in November 2015, 1.4 million were cut off from water when a water treatment plant in Aleppo was damaged  by the air raids.

It is important to note that most of the damage assessments, including the one completed by the World Bank, were conducted with data till the end of 2014. Since then, the violence has only increased; more damage in Syria was reported in 2015 compared to previous years. Infrastructure and public services have also continued to deteriorate since 2014. The picture has grown even bleaker, and the need for a solution that much more urgent.
Topics
Fragility Conflict and Violence
Countries
Syrian Arab Republic
Regions
Middle East and North Africa