Djibouti: What Happens When Women Control the Income? 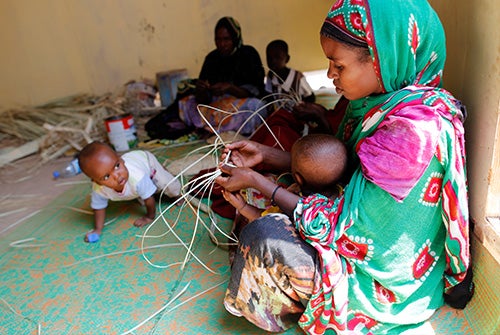 Imagine you are a mother of three in Djibouti, a tiny country on the Horn of the Africa with scarce farmable land or drinking water that is a frequent victim of devastating floods and droughts.  In this challenging environment, high food prices make it difficult for you and your husband to feed and care for your children and yourselves.

Like any mother, you want what’s best for your family, but your household income is precarious.

“Our income depends on the work my husband finds,” a woman might typically say. “Often, he is paid daily. Sometimes he finds work only once a week.” As a result, 70 percent of children under the age of five and 15 percent of pregnant or lactating women suffer some degree of chronic malnutrition. Djibouti, a desert landscape with a port on the Red Sea, has a population of just 900,000.

So what do you do? You talk to your neighbor, a mother of six, and ask her what she does to get by. She tells you she’s going to a place where she can get help on how best to feed her children. You join her.

The facility is a type of Social Safety Net (SSN) program. Such SSN programs aim to protect the poorest, most vulnerable households and encourage them to make better investments in their future. They are examples of a rights-based approach to community development. They move beyond providing services for the poor, focusing on social empowerment as a means of effecting long-term, sustainable change.

One of these programs is the World Bank-funded Djibouti Social Safety Net Program, which combines providing temporary work with providing basic education on nutrition. The program serves pregnant and lactating women, as well as those with children under two years of age, giving them nutritional advice and opportunities for short-term work.

We wanted to hear from the women who were learning about nutrition and earning a little money, to understand from them the program’s impact on the wellbeing of their children and its effect on their economic decision-making.

In many Djiboutian households, it is the wife who looks after the household income, while her husband keeps only a small portion for himself. Although about 70 percent of women participating in both the nutrition and cash-for-work programs said they looked after the household cash, almost half, however, also said that, in the end, though they looked after the money, it was their husbands who decided how it was spent.

This changed with the cash-for-work program, where women really did seem to be able to take charge, with nearly all (95 percent) of the women enrolled in both the nutrition and the temporary works programs saying they kept control of their own income, one even stating, “I don’t give any [money] to my husband; I take the responsibility for the needs of my family.”

Nearly all women (93 percent) said they spent the extra money on food and other things ofbenefit to the family, including home improvements, clothing, and mosquito nets.  This additional income was not enough to meet their needs, though, given the general level of poverty and the high cost of consumer goods.

The program also gave participants hope for a future in which they imagined themselves in small businesses (20 percent) or a job with regular pay (20 percent). Many women expressed a desire to save money but were frustrated by their inability to do so. “It depends,” one woman said “… there are times when I save, but this is rare as we have expenses for food every day.”

Several women said they had seen their children’s health improve during the program, specifically describing how they appreciated being able to track their children’s weight, and learn—from cooking demonstrations—how to prepare nutritious meals. "My child was malnourished, but his health has improved,” said one woman.

About 66 percent of respondents said the program should be continued—even expanded. Women participants and their husbands saidthe type of information they had learned should be passed onto neighbors and families, bringing other communities into the program too. Some of the husbands interviewed described it as a “perfect program”, asking that it “not end” and—because of the high cost of food and clothing in Djibouti— that “the income be increased to 1500 FD per day”.

The SSN program in Djibouti illustrates the advantages of adopting a rights-based approach to nutrition.

There is global evidence to show that income controlled by women has a much greater effect on child nutrition and household food security than income controlled by men. In Ethiopia, which neighbors Djibouti, for example, a community-based program improved local knowledge of reducing stunting in children, while in India and Bangladesh, public works program have also had positive effects.