The economic impact of the Syrian conflict: Estimate it yourself 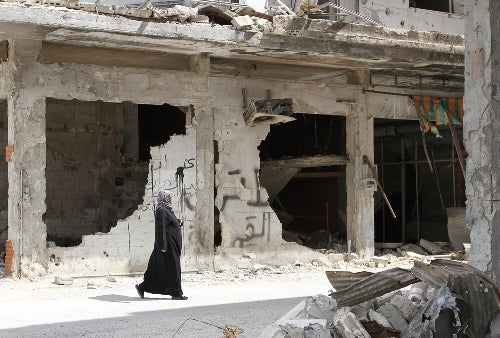 Everyone agrees that conflicts impose huge costs on economies, including massive destruction of infrastructure and housing, disruption of trade, transport and production, not to mention the loss of lives and widespread human suffering. Yet quantitative estimates of these costs are hard to come by. Collier et al (2003) show that civil wars reduce GDP per capita by about 10 to 15% permanently. The study uses correlates of war to show that the loss of output during the conflict is around 18%. When it comes to a specific country in conflict, estimates vary significantly.

Take Syria, where war and violence have interrupted economic activity for six years. The 2017 MENA Economic Monitor report puts the estimated cost of the damages to infrastructure in six Syrian cities at $7.2 billion at 2007 prices, or $41 billion at current prices. A Syrian Center for Policy Research (SCPR) and UNDP report estimates the destruction of physical infrastructure at around $67.3 billion. Other estimates point to different numbers. The loss in GDP relative to the "no war" counterfactual in Syria alone is estimated at $200-300 billion.

The existence of a conflict makes measurement of economic activity problematic. In the absence of hard data, many assumptions have to be made. Consequently, any estimate of the cost of the Syrian conflict or the impact of reconstruction have to be treated as a point estimate with a very wide error band. The size of this error band will depend on the sensitivity of some of the assumptions to the point estimate. To capture this uncertainty, we have developed a simulation tool, Economic Impact Calculator, that enables you, the user, to calculate your own estimates based on your assumptions and knowledge. The tool allows the user to estimate the costs of conflict and economic impact of future infrastructure spending on Syria’s GDP.

The interactive calculator combines data from the World Bank with insights from the economics literature to estimate the economic impact of damages to infrastructure and reconstruction spending in seven key sectors — agriculture, education, energy, health, housing, transportation, and water and sanitation — in six cities of Syria: Aleppo, Dar'a, Hama, Homs, Idlib, and Latakia. The base case incorporates some key economic assumptions: sector based damage ratios, output and spending multipliers, and efficiency of spending. You can change these assumptions to calculate your own economic impact of the conflict and spending under different scenarios. The tool is designed to inform policy makers, scholars, and the general public about the burden of conflict and priorities in post-conflict reconstruction. Dear Shanta:
Thanks for sharing this information, it's an excellent tool.
Regards, Farah

Syria is a big question in front of defferent countries in Middle east and Africa. The People of Syria is no more shelter in defferent neibghouring countries. The citizens are suffering from lack of food and and temperory shelter which they are in host countries.3/4 of the countrie is destroyed by the fighting and bombardment. Re-construction will take years to become normel position. Millions of Dollers requared for re construction and re-hebilitation of citizens. The peace will become when Azad regime should step down from the Power and throrn to the People of peoples Power.Hope with in Two or Three years Syria will become Peace and normal life will take place.

It is about time to put an end to economic fiction. It is just not possible to calculate, to estimate the economic cost of a civil war, not even approximately. Besides, in front of a devastating human lost, who cares about material and financial lost? Indeed, in a war, the only relevant lost are human lives. Infrastructure can be rebuilt exactly the way it were, but a live is lost forever. So do not tell me about economic lost but instead talk to me about how to puit an end to human suffering. That´s the real mission of WB.