Bank Funding Helps Emergency Programs on the Ground in Yemen 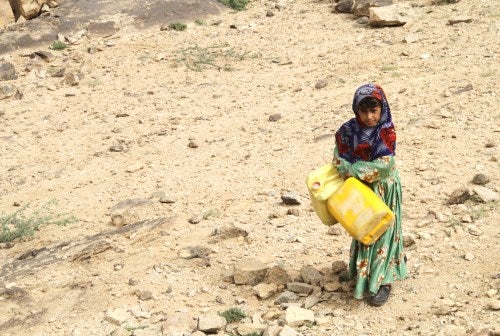 Yemen is facing an unprecedented political, humanitarian, and development crisis. Long the poorest country in the Arab region, over half its population was living below the poverty line before the current conflict worsened. That number has risen steeply, with over 21.5 million people needing humanitarian assistance now—close to 80% of the country’s 28 million people.

Yemen’s political transition unraveled into full-blown war in March 2015. It has had a catastrophic impact: We in the United Nations estimate it’s already resulted in over 10,000 civilian injuries and deaths. Over 3 million people are displaced. About US$19 billion in damage to infrastructure and in other economic losses have been caused so far.

The increased lack of food, medicine, electricity, and jobs has exacerbated an already dire humanitarian situation. The high proportion of Yemenis in need of humanitarian assistance is putting a severe strain on under-funded humanitarian and development agencies. Less than 50% of the UN’s 2016 Humanitarian Response Plan is funded.

The 2016 World Humanitarian Summit, held in Istanbul, promised a new way of working to transcend the established division between humanitarian and development work. It is based on the premise of using resources and capabilities better, and galvanizing new partnerships to provide extra capabilities and resources to support collective, measurable outcomes for communities of people.

As one of the few development agencies on the ground in Yemen, UNDP plays its part in the WHS plan of action. Recently, it forged an innovative partnership with the World Bank Group to implement a US$300 million emergency project supporting 2 million Yemenis through cash-for-work programs, as well as through improvements to public service delivery and the repairing of critical infrastructure across the country.

This new International Development Agency (IDA)-financed program builds on two decades of the Bank’s development experience and its partnerships with institutions in Yemen. It is designed to continue to work despite the conflict. The aim is to build up the resilience of the most vulnerable Yemenis, and also to support the capacity of Yemen’s local institutions, such as the Social Fund for Development and Public Works Project, both of which continue to deliver critical services during this time of crisis.

This scaled-up support will help preserve the capacity of these institutions so that they remain capable of delivering critical services for recovery programs once the fighting stops.

For our part, UNDP is taking on the responsibility of delivering these resources through the cluster system in strong coordination with the relevant UN agencies and NGOs. IDA will continue to provide its global technical expertise to guide these two programs, by working with all the international and local partners involved to ensure they respond to evolving challenges and achieve their intended development outcomes.
Topics
Fragility Conflict and Violence
Education
Health
Poverty
Urban Development
Countries
Yemen
Regions
Middle East and North Africa
Series
International Development Association (IDA) Thank you IDA and UNDP for offering critical services during this time of crisis.