Invest in women to boost growth in MENA 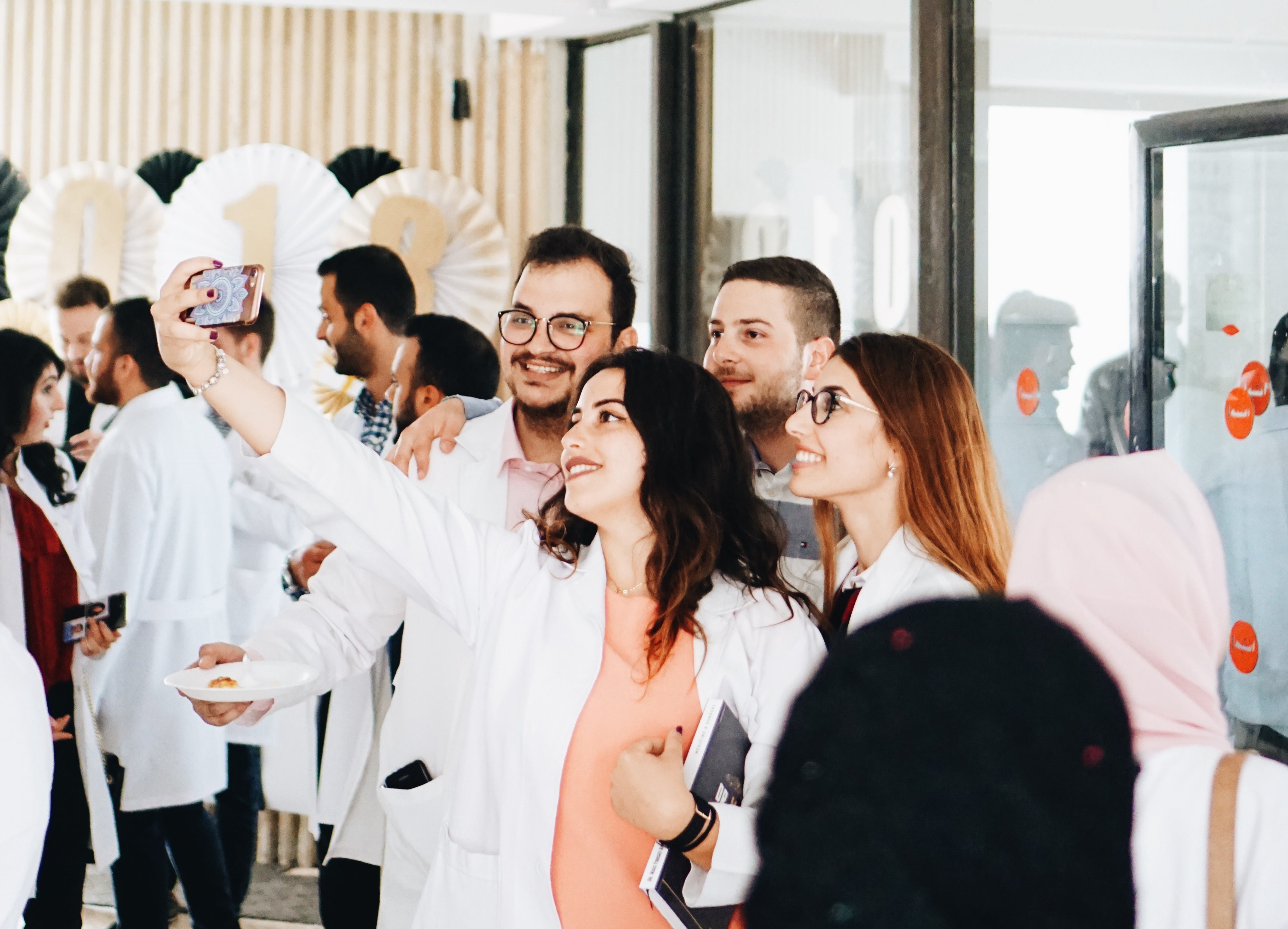 Only one in five working-age women in the Middle East and North Africa (MENA) region has a job or is actively looking for one. Currently, women make up only 21% of the labor force and only contribute 18% to MENA’s overall GDP. Had the gender gap in labor force participation been narrowed over the past decade, the GDP growth rate in MENA could have doubled or increased by about US$1 trillion in cumulative output. Instead, the current gender gap in the traditional labor market has extended to the rest of the economy, including the technology sector, impacting women’s access to, and use of, digital services. Women are 9% less likely to own a mobile phone and 21% less likely than men to use mobile internet.

The status quo is not sustainable. It is time to do things differently and put collective efforts into designing and implementing innovative, evidence-driven policies and programs to ensure a permanent end to the many gender gaps in the region. To be sure, the ever-increasing gender gap in MENA requires taking action to close gaps in employment opportunities, earnings, data collection (where there is a lack of knowledge of men and women’s attitudes and views on gender equality), mobility, digital use and affordable access, acquisition of soft skills, and leadership positions.

To that end, and to mark the occasion of International Women’s Day 2019, the World Bank is launching the MENA Gender Innovation Lab (MNAGIL) Evidence for Policy Research Hub — the first of its kind —for the region. The new MNAGIL serves as a regional platform to generate rigorous evidence and create smart interventions to inform the design and implementation of gender-related policies and programs across the region. The Lab will conduct impact evaluations, using randomized control trials, to understand what works, what does not work, and why, and how to empower women in MENA. The Lab will also partner with regional policymakers and global development practitioners to continuously improve policy interventions to eliminate the many gender disparities in the region, especially in the context of conflict and among refugees and displaced women.

Cultural beliefs and practices, restrictive laws and regulations, and the multitude of gender-biased social norms that impede women’s access to jobs, digital services, and training draw a grim picture of the deteriorating gender gap, especially in fragile and remote areas. To curb the trend, the World Bank’s MNAGIL has established a cohesive, three-pronged strategic pillar structure, also known as "the 3 As":

1. Advance women’s workforce development: To strengthen vocational and digital-related training for women to increase mobility and occupational choices. A low level of female labor force participation signals a strong need for investment in women’s education and skills, health, and nutrition. In this vein, it is important to promote fields relating to science, technology, engineering, and mathematics (STEM) and quantitative skills for girls and women; leverage technology and best practices to boost productivity; and support women in entry-level jobs. Research shows that women who perform more information and communications technologies (ICT)-related tasks in their jobs receive higher pay — as much as 12% — than those without such skills.

2. Accelerate access to financial capital: To empower women to start businesses by facilitating their access to finance, banking, credit, and digital payments. A recent study by IFC notes that the MENA region has the second highest female micro-enterprise financing gap (29%), a US$16 billion gap between the credit female entrepreneurs in MENA need and the financing they receive. There is also a significant gender gap in ownership of  assets and financial accounts in MENA (figure 1). There is a dearth of disaggregated gender data, particularly on mobility patterns; more importantly, there is a vital need for data on women’s transportation behaviors and attitudes. 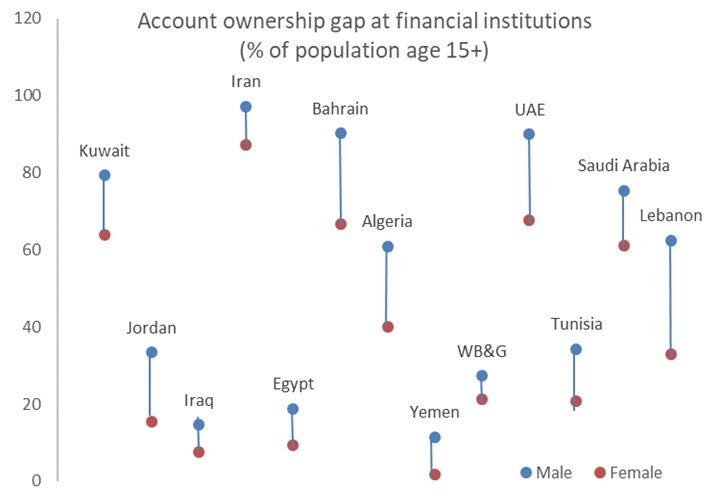 Source: World Bank data 3. Agency and voice: To acknowledge and enforce equal opportunity laws and regulations, making sure they work for women and revamp cultural barriers that prevent women from participating in the economy. According to a recent World Bank study, in more than half of the countries in MENA, women are prohibited from working in specific industries. Furthermore, in 65% of the countries in the region, working outside of the house is perceived to be inappropriate and immoral for women (figure 2). In many more countries, women are unable to inherit wealth and land as men do or open a formal bank account without permission from a male relative. 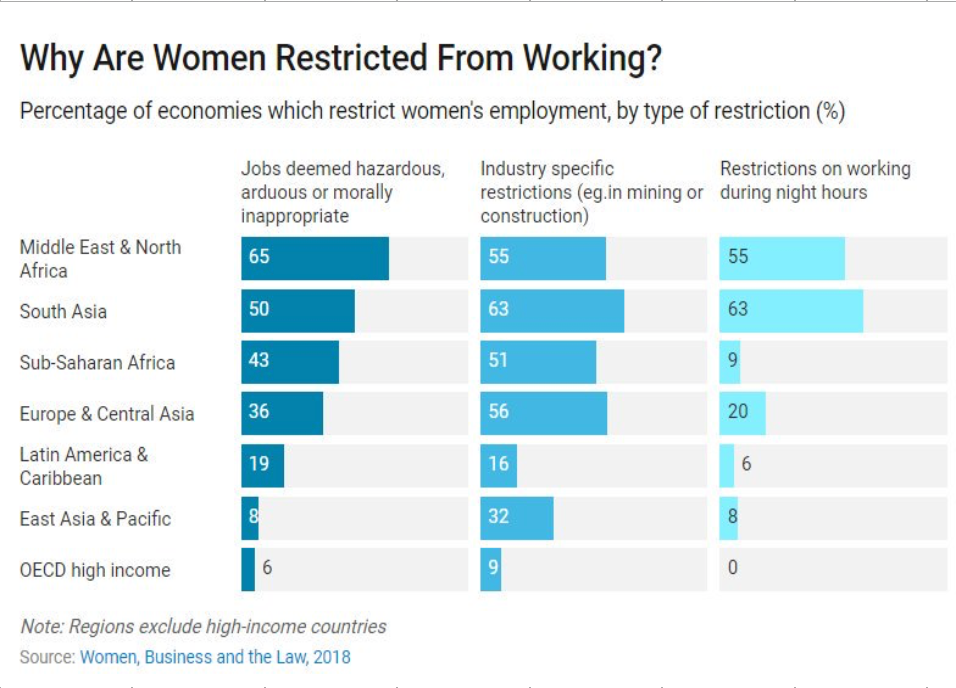 To boost growth in MENA, women are important. Bridging the gender gap will increase regional output, and put MENA on a higher, sustainable, and inclusive growth path in the long run. It is critical to change social norms and culture in order to change behaviors. It is critical to enforce equal opportunity laws and regulations and introduce re-skilling interventions for women and girls by focusing on the STEM pathway to narrow the multitude of gender gaps that continue to widen. Without such action, according to the 2018 World Economic Forum Global Gender Gap Report, closing the gender gap in MENA could take centuries. In the context of improving policy interventions to eliminate gender disparities in the region, especially in the context of conflict and among refugees and displaced women it is also necessary to include women-headed families in which women are the key players as well as ex-combatants in freedom fighting/militants groups. Looking after the welfare of those return to normal life and to empower them to enhance their skills, and ultimately stand their own.
Further strengthening the Rural Woman Development Societies and similar organizations to support those in need especially to find them suitable income generation as well as sustaining their family income. Educating women is necessary and it has to be a continuous process. Their self-defence against sexual harassment, taking precautions for such an inhumane act, preventing such possible incidences, creating mechanisms to file their cases for a justice. Often they are being treated as slaves and threatened for those illegal forcible acts.
Hope the MENA Gender Innovation Lab will do its best of services through the research planned in many countries.
Wishes,
G.Mikunthan

Thank you very much for your excellent points, Prof. Mikunthan. These are all well taken. The Gender Innovation Lab constantly seeks new ideas to do the best evidence-based research to inform the design and implementation of polices in the region. We invite you to check back for Call for Proposals on May 15, 2019.
Best wishes!
Lili