Iran’s return to the oil market: Who benefits and who loses? 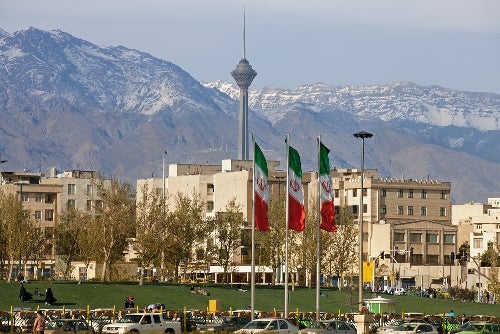 The collapse of oil prices to levels unseen since the early 2000s has shaken markets and confidence in the health of major economies. Expert opinions about the factors driving the steep descent in oil prices include the lifting of economic sanctions on Iran. Yet, there is no consensus on the extent to which Iran’s return to markets has affected oil prices or the welfare of affected parties.

In a recent paper, we quantify the global effects of this change in Iran’s trading opportunities, focusing on the countries that are likely to be affected the most by the lifting of the oil embargo. The 2012 restrictions imposed by the European Union (EU) on Iran were the most far-reaching of the sanctions as they curtailed the sales of Iran’s most important export commodity. We also capture in a stylized way other components of the nuclear deal:  the expected reduction in Iran’s trading costs and the liberalization of cross-border trade in financial and transport services. The global effects of these two components are small as Iran accounts for a negligible share of the world’s non-oil trade.

Assuming Iran is able to increase oil production and exports to the EU to pre-embargo levels, we estimate the oil price to decline by 13 percent (or about $3 a barrel at current market prices). This decline implies losses for the net oil-exporting nations that are steepest for OPEC members, especially the GCC states, which as a group lose nearly 4 percent in per capita welfare (refer to inserted Table 10 from the document). The losses are due to the deterioration in their terms of trade. As many of them subsidize oil, the lower oil price will have a compensating efficiency gain, but not enough to reverse the welfare loss.

By contrast, oil-importing economies are expected to benefit--mostly because of improvements in their terms of trade, but also because cheaper oil enables expansion of industries that use crude oil and because in most of these countries oil use is taxed. In percentage terms, the gains to the oil-importing countries are modest, mostly in the range between a quarter and half a percent, but the world as a whole is better off as the gains to oil importers outweigh the losses to oil exporters.

As expected, the lifting of the economic sanctions is most beneficial to Iran, where per capita welfare is expected to rise by almost 4 percent. The gains are due to the expansion of oil production and exports and the liberalization of cross-border trade in financial and transport services. Importantly, the magnitude of the estimated oil price change suggests that the dramatic oil price drop observed since 2015 has little to do with the anticipated lifting of Iran’s oil embargo. Other factors have been driving down the price of oil.

Iran’s gains may be much more modest if Iranians are unable to increase oil production or oil exports to their pre-embargo levels. We estimate that a bounce back to just half of Iran’s pre-embargo oil exports to the EU is associated with per capita welfare gains of only 3 percent (oil prices will correspondingly decline by less). If major OPEC members cut back oil production and exports in order to avoid oil price declines, they will limit their losses and reduce the gains to oil importers. In this case, the world as a whole is also worse off as the reduction in oil exporters’ losses would be insufficient to compensate for the reduction in oil importers’ gains. Importantly, such a response by oil exporters will enhance Iran’s per capita gain, which almost doubles to 6.5 percent in the case of full oil export recovery. 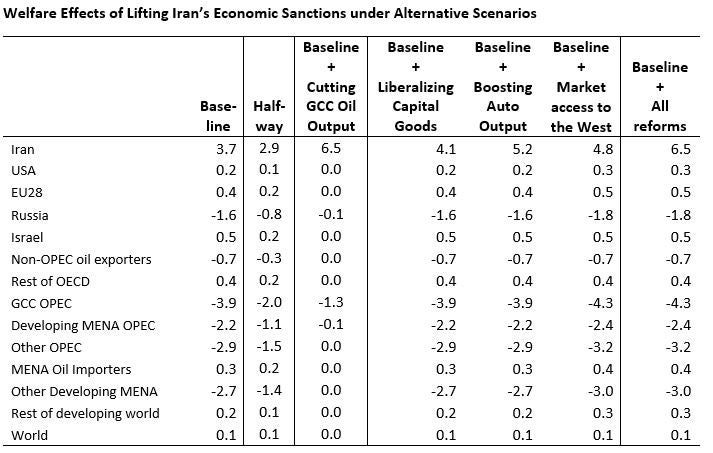 How can Iran get the most benefit from the lifting of sanctions? Iran can implement reforms that improve the competitiveness of its economy. For example, unilateral reductions of Iranian tariffs on imports of capital goods could add half a percentage point to the gains expected in the baseline scenario, as this reform enhances firms’ ability to upgrade their factories and import new technology. Reforms in support of the recovery of the domestic automobile sector could increase per capita welfare in Iran by an additional 1.5 percentage points. Finally, if Iran keeps its part of the deal, the West may further open its markets to Iranian goods. The effect of reducing non-tariff measures imposed by the US, the EU, and other OECD countries on Iranian exports to the average levels imposed on other countries could add 1.1 percentage points on top of the gains expected in the baseline.
Topics
Energy
Countries
Iran
Regions
Middle East and North Africa How can Iran get most of the benefits from lifting of sanctions?
(1.)Being most competitive in its Crude oil exports, which forms big proportion of Iran's Trade. Making Low Carbon crude oil with less Sulphur will give Iran a competitive edge among rest of tge world oil exporters. It will also make Iran commitments to UN's Post 2015 Agenda on Climate Change and Mitigation and COP21 Climate Action.
(2.)Unilateral Trade reduction of import Tariff on capital goods could be conducive to attract Foreign Direct Investments (FDI) into Uran. The emerging Global Value Chains (GVC's) could be a sprinter for this capital flows inwards to Iran.
(3.)If Iran enter Multilateral trading system and also keeps it part on the signed Nucler deal will attract West (US, EU and OECD) further open markets to Iranian goods and trade.