Yemen is teaching us that it’s possible to strengthen national institutions and build human capital – even in times of conflict – by investing in effective local actors so they are stronger when peace returns.

The country has seen conflict erupt on no less than 30 frontlines since early 2015, triggering the collapse of basic services. It has become the world’s largest humanitarian crisis and host to one of modern history’s largest cholera outbreaks. Development activities have been frozen and donor funds directed toward saving lives.

The conflict has brought already poor communities to the brink. With their lack of income, the majority of the population has become hopelessly dependent on aid, while their own human capital and natural resources have remained underused.

From the start, the World Bank adopted a new approach to the situation, introducing sustainable, inclusive interventions. The Bank’s strategy for the Middle East & North Africa shifted its engagement from working around instability to working toward stability.

As Yemen’s conflict became more protracted, the Bank, through the Emergency Crisis Response Project, supported the Social Fund for Development (SFD)—a large, national institution the Bank had supported, financially and technically, for over two decades to deliver support to vulnerable populations. 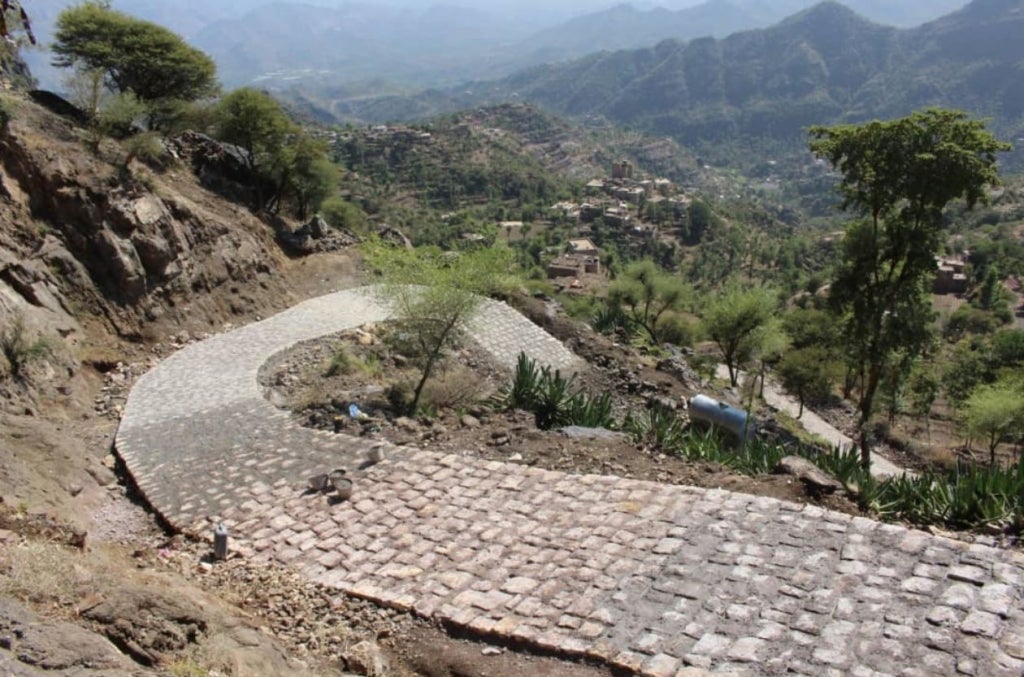 An "after" photo of a completed road in Yemen as part of the "Tamkeen" project. Photo: Social Fund for Development Yemen

Tamkeen is an example of SFD support. A longstanding program for development planning, it encourages social and economic resilience in the face of conflict by assessing a community’s resources—its skills, public facilities, financial resources, and building materials—and ensuring that local participation in any new infrastructure projects includes women, internally-displaced persons, and other marginalized groups.

The program places conflict-created distrust to one side, empowers the poorest communities, and strengthens social cohesion. This includes the election of Village Cooperative Councils (VCCs), which are trained to convince people not to wait for handouts but to mobilize themselves.

With a budget of US$197,000, one SFD-Tamkeen project has carried out more than 700 small-scale projects serving nearly 80,000 people in the Al-Salfiah district in central Raymah, the poorest, most inaccessible governorate in Yemen. Its initiatives include building and rehabilitating rural roads, improving land and water sources, protecting learning facilities and health facilities, and training people in healthcare and in crafts.

Under the supervision of 90 rural youths (50% of them women), Al-Salfiah’s community elected 93 people to the village councils, another 50% of them women. Mohamed Kawesh, Tamkeen’s local coordinator and community participation director, described this as the largest and most meaningful community response he had witnessed, outdoing anything similar in peacetime.

The program relies on local contributions as well. Abdulsalam Aljarmi, a trader from Kazoma village, said he contributed over US$1,000 to build and pave a road to his mountain-top village. “As we used the materials and labor available,” the road cost far less than one built by a contractor, he said. Five other villages uphill had volunteered time, effort, and money toward the project, with the village councils allocating a number of hours of work to each family. Families honored their commitment when they trusted the outcome would benefit them.

Tamkeen works by providing each village financial support for its largest initiative, scheduling it for last in order to sustain community momentum throughout the smaller projects that come before it.

A budget of US$22,000 in conditional financing for such a project ignited competition between Al-Salfiah’s 146 local communities, prompting talk about progress rather than conflict.  “I visualize this like parts of a vehicle. Each part is doing its role so that the vehicle moves uphill and reaches its destination,” Kawesh, the local Tamkeen coordinator, said. Locally, he said the level of violence subsided.

Tamkeen’s engagement of women helps build peace and social resilience. “Here, it is unprecedented that women’s voices are clearly heard,” said Kawesh, pointing to Shafiqa, the only educated tribal woman in the district’s Alakamah village. Despite suffering a disability, she had created an adult female literacy center in the village and volunteered to teach children, both at school and in her home.

Shafiqa went on to win a seat on the village council and encouraged other women to nominate themselves. Now, she can make women’s priorities heard. Her voice has resulted in two more new female literacy centers in neighboring villages.

Tamkeen is an example of the sort of nutrition and microfinance programs the World Bank has supported in Yemen since 1997. The World Bank is channeling US$1.7 billion through United Nations agencies to help national institutions in Yemen retain capacity through humanitarian crises. Other donors are also supporting Yemen’s SFD to scale up so it can play a role in post-conflict recovery.