This is an excerpt from an article previously published at Syriadeeply.org. Read the full article here. 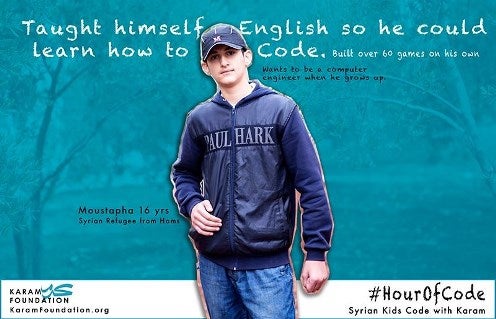 “I went to Turkey with low expectations, thinking I will meet with angry kids who had got used to the fact they’re ‘refugees,’ said Middle East tech entrepreneur Moe Ghashim, on his first visit to Reyhanli, Turkey.

He was there as part of leadership pilot from Karam Foundation, a non-profit supporting Syrian refugee schools. Moe was floored by the drive, curiosity and talent of the Syrian teenagers and how they took to computing and the idea of starting their own companies. “The surprise was that the 14 kids in the program were so prepared and made sure they studied all the materials we sent them,” he added, “they finished a four/five day program in two days. They were hungry to learn.”

Moustafa is one of the 14 kids who participated in the Karam Pilot Leadership (KLP) project designed to give Syrian refugee teens access to technology and mentors.

He’s a tall, handsome young man who just completed 10th grade and is always wearing a baseball cap. He’s from Houla, a village outside Homs now known for its 2012 massacre.

Moustafa lived in Houla and took computer courses in Homs since he was in fifth grade. He is brilliant and unaware of his brilliance. He taught himself five programming languages online and has designed more than 100 games. He was displaced multiple times before settling in Reyhanli, where he joined the KLP pilot in November. He took the Scratch coding course with other mentors like Moe and quickly advanced to teach Scratch to the younger children at the school. He has since been assigned to be the monitor of the Karam computer lab.

Four million refugees are now spread across Turkey, Jordan, Iraq, and Lebanon and beyond – out of a country of some 22 million. When one contemplates the movement of people in the Syria crisis, the numbers are so daunting that they become abstract. In terms of percentages of U.S. population, that is like saying that all the people in Texas and California had moved to Canada or Mexico within a few short years.

Add to that, according to the United Nations, another 6 million inside Syria are without the basic necessities of life, refugees within their own borders, subjected – on top of everything else – to unspeakable violence.

Most refugee organizations focus on the basic crisis – food, shelter, health care, safety. But as this crisis enters its fourth year, with no clear path in sight for the refugees to return home, a chilling phrase has come to be commonly heard: that a generation – with little education and less path to an economic future – is being lost.

Today big problems that need scalable solutions suggest one thing to those of us who have seen its impact: the problem-solving that can come with technology.

It had special significance for Syrian- born Moe. He has become something of a legend in the Middle East as the founder of the new and successful e-commerce enterprise ShopGO. “Technology matters in this context for two reasons,” Moe explained to me. “First off, technology literally won me a life. All Syrians I know as émigrés or refugees have struggled to accept/integrate/adjust/adapt with the new life. It’s a life without history, a life where you have to prove yourself all over again. Because of technology, I – anyone – can speak the modern language. I’m an international resident, I’m already part of the new world. Second, because of technology I was able to start my company after a couple of months. Technology is cheap and you can reach millions easily. I can start a company, try and fail quickly without costing a fortune. If it works I build jobs for many. If not, when I’m looking for a job then that’s what everyone is looking for – a workforce with tech skills.”

The KLP pilot launched last November with a computer center of 22 stations. It includes workshops to help supplement basic education and the skills needed to create a living today and for when they return.
​
Karam Foundation co-founder Lina Sergie Attar understands that Moustafa is a seed – as he takes hold, dozens of others will as well. Success will breed success; big things have small beginnings. She smiles in reflection: “When we first met him he was shy and when I asked him, ‘What do you want to be?’ he said, ‘A computer engineer.’ This time he was smiling confidently – he looked like a different person. I asked him again, ‘What do you want to be?’ and he said, ‘I want to go to America, to the best university and design the best games.’”

And he Whatsapp chats every day about his future with other mentors he met at KLP. Very nice. Good to see this in work

You have made some really good points there. I looked on the internet for additional information about the issue and found most people will go along with
your views on this website.