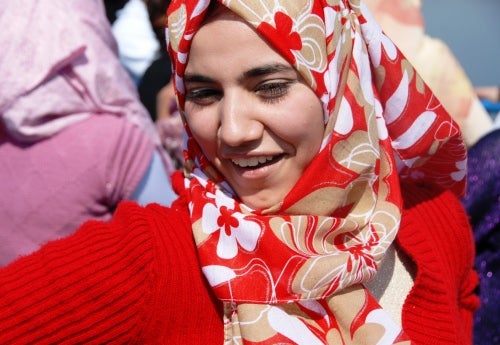 Women currently make up 49.7% of around 345.5 million people in the Middle East and North Africa region. But despite the many advances made in terms of closing the gender gap in health, political representation, and labor force participation, many other barriers remain.

To celebrate International Women’s Day, here’s a list of facts about women of the Arab world.

1. 48% of women in the Arab world do not own a mobile phone: That’s 84 million unconnected women in the region. About 91 million women do own a mobile phone but that is 8 million less than the number of men who own one, according to the report “Connected Women 2015.” Making mobile phones and plans cheaper could help: for example, Egypt has a very narrow gap in terms of men vs. women’s ownership of mobiles because ownership is high for both sexes due a very competitive mobile phone market that keeps prices low.

2. The gender gap in Internet usage across the region is 34%. According to the MENA Broadband Report, this is the 2nd largest gender gap in the world after the Sub-Saharan Africa region (45%). And the latest research by Oredoo in MENA shows that 2 in 3 Internet users in the MENA region are men. Gender inequality in Internet and mobile phone usage is a significant contributor to the development of the social divide in MENA, according to the World Bank. Many Arab countries now realize that broadband Internet is crucial to reducing poverty and creating jobs, especially for women and youth.

3. Depression is the leading cause of illness for women in MENA. The MENA region is ranked higher than any other region in the world in terms of women’s depression! Seven out of the top 10 countries ranked by depression in women are in MENA. Women between the ages of 15–49 are said to be the most affected. It’s interesting to note that men in the region are also more prone to depression, but the gap between the numbers of men and women suffering from it is still higher in MENA than all other regions, according to World Bank health stats.

4. Obesity is epidemic among women in the region (and also, for men) with some of the highest rates of it in the world. Five of the region’s countries landed in the Global Top 20 for female obesity. Kuwait ranks 2nd at 55% of its female population considered obese. In Egypt, 1/2 of all women are obese, but 1/5 of men are obese. Other Middle Eastern countries on the list include the United Arab Emirates (UAE) (42%), Bahrain (38%), and Jordan (38%).

5. Maternal mortality rates in the Arab world have gone down by 60% on average over the last 2 decades. Today, mothers are almost 3 times more likely to survive childbirth, compared to 20 years ago; and their babies are more likely to survive the first five years of their lives. However, the regional average doesn’t highlight the 2 poorest countries: Djibouti and Yemen.

7. Political empowerment has improved in the region, apparently more than doubling the rate in 2006, according to the WEF Gender Gap Report, but it is still very low. Globally, the average percentage of women in parliament is 25%, but across the Arab world as a whole, women only hold 7% of parliamentary seats.

8. Women’s participation in the workforce is low, at 25%. The global average for women in the labor force is about 50%. In MENA it half that despite the fact that more and more women are better educated than before. Only 17% of women work in the non-agricultural sector.

9. Education for women is up! Almost all young girls in MENA attend school, and more women than men are enrolled in university.

10. Despite improvements, the Arab World is ranked last overall globally in the WEF Gender Gap Report with its highest-scoring country placing below the regional averages for all the other 5 regions. Last year, the highest climber was Kuwait. At number 113 out of 142 countries, it was the top-performing country in the Arab world due to a significant increase in the “estimated earned income” indicator. The Arab world also has the country at the very bottom of the Gender Gap Index: Yemen. At 142, Yemen has remained at the bottom of the index since 2006 but has significantly improved relative to its own past scores.
The authors of the WEF Global Gender Report have said it has taken them 9 years of working on the report to realize that women will have to wait 81 years for worldwide gender parity in the workplace. Perhaps by working together, MENA can close that gender gap, and the gap in other areas, sooner than that. I think we should have rights

I think we should have rights