What is the social contract and why does the Arab world need a new one? 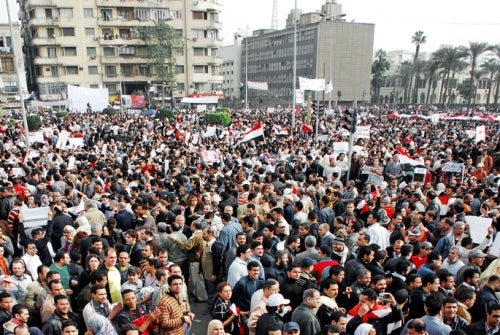 The ‘social contract’ is an idea that dates back to the ancient Greeks, and refers to the implicit agreement among members of a society that defines their relationship with each other and the state. That relationship holds the key to unravelling the puzzle of the ‘Arab Spring.’

To development economists (like myself), the uprisings that started in Tunisia and spread to several countries in the Arab world in 2010-11 came as somewhat of a surprise.  For the previous decade, almost all the indicators of economic well-being were strong and improving.   GDP growth was substantial, at about 5 percent a year.  Extreme poverty (people living on $1.25 a day) was low and declining.  Conventional measures of inequality, such as the Gini coefficient, were lower than in other middle-income countries, and in some cases declining.  In Egypt and Tunisia, the per-capita income of the bottom 40 percent was growing faster than the average.  In terms of human development, the Middle East and North Africa region recorded the fastest decline in child mortality rates and the steepest increase in school attainment.

Yet, as various Gallup and World Values Surveys indicate, there was growing dissatisfaction in these societies, which erupted in revolutions in four countries and popular protests in several others.  While much of the protests were about voice and political accountability, there is still a puzzle of how there could have been so much discontent in the face of seemingly strong and improving economic conditions. The solution lies in the nature of the social contract in these countries that, on the one hand, delivered the favorable indicators mentioned above, but on the other hand failed to meet the aspirations of the growing middle class, and especially its youth.

In almost all countries, governments provided free education and health; subsidies for food and, later, fuel; and jobs in the public sector with guaranteed benefits for life.  The result was that human development progressed at a rapid pace; the economy grew thanks to oil-related rents and public investments; and the poor were protected with food subsidies.  The outcomes were low and declining inequality, low poverty and, at least using the World Bank’s definition, shared prosperity.

On the other side of this social contract, however, were governments that were authoritarian, brooked very little dissent, and in some cases denied human rights to certain groups.

At the turn of the century, several aspects of this social contract were beginning to fray.  First, because of significant fiscal deficits, the public sector could no longer be the “employer of first and last resort.”  In fact, the public sector started retrenching.  A generation of young people, who had diligently gone to school thinking they would get a public-sector job, found themselves unemployed.  Worse, their skills were not suited to the private sector, which nevertheless was not growing rapidly enough to absorb them.  The Middle East and North Africa found itself with the highest unemployment rate in the world, with the rates for young people and women nearly double the overall rate. Moreover, about 80 percent of the population believed that most jobs were based on connections rather than merit--adding to the frustration of newly-educated young population.

Secondly, it was becoming clear that lagging private sector growth was related to the autocratic nature of the regimes.  In particular, friends and families of the autocrats benefited through monopoly rents in domestic industries, undermining export competitiveness and employment creation.  For instance, the “Ben Ali firms” in Tunisia, while they were only 0.8 percent of industrial output, accounted for 21 percent of profits.  These firms benefited from regulations that restricted foreign investment in sectors where they were involved—transport, banking and
telecommunications—which raised prices for inputs to the exporting sectors and made them less competitive globally.  As a consequence, growth was insufficient to absorb the large number of young people entering the labor market each year.

Thirdly, the web of subsidies that were part of the social compact had become more of a burden than a benefit.  Fuel subsidies in particular accrued mainly to the rich and resulted in an economic structure that favored capital- rather than labor-intensive industries.  There is also evidence that, in Egypt, politically connected firms benefited disproportionately from fuel subsidies.  The previously free education and health, while it delivered on basic education and health, was becoming increasingly ineffective at delivering quality.  Teacher and doctor absenteeism in schools and clinics were common.  A private sector emerged that made people pay for the same services to which they were entitled.  As a woman in Egypt put it, “You can go to the private clinic and lose all your money, or go to the public clinic and lose your life.”

As a reflection of these difficulties with the social compact, citizens’ satisfaction with their governments was deteriorating, even when other economic indicators were looking promising.  Resentment grew to the point where it erupted into widespread protests and in four countries, the autocratic leader was removed from office.

Understanding the Arab Spring paradox points us to the solution.  It is clear that a new social contract is needed.  Competition policy (a “level playing field”) should be enforced.  Subsidies should be replaced with targeted cash transfers, which give poor citizens a choice of what goods to consume.  And the public sector should be rationalized to perform those functions that government should perform, rather than simply be an employer of first or even last resort.
Topics
Social Sustainability and Inclusion
Countries
Algeria
Bahrain
Djibouti
Egypt
Iran
Iraq
Jordan
Kuwait
Lebanon
Libya
Morocco
Oman
Qatar
Saudi Arabia
Syrian Arab Republic
Tunisia
United Arab Emirates
West Bank and Gaza
Yemen
Regions
Middle East and North Africa Sure youth unemployment was a factor but actually this piece totally ignores other critical factors:
- The start of Tunisia up-rise was the poor seller who was struggling to make end meet and eventually was kicked out of the street which was the straw that broke the camel’s back
- The popular call of the Egyptian revolution: Bread, Freedom, Social Justice. Bread came first
- Despite the nice figures quoted by WB and IMF there was rising income gap between those who scrap to feed their families and the top few who were shopping in London and Paris. It was not the macro- economic figures that mattered but the rising inequality. I remember a provocative TV ad saying “break your old bathroom and buy a new one” showing picture of a dream bathroom where middle class neighbours were struggling with bad sanitation systems!
- The combination of unemployment, high prices despite food subsidy (subsidy did not cover all basic food) and having to pay for health and education led to real suffering for the bottom 40%
On several occasions I heard you speak about absenteeism of public sector workers as if it is their fault ! This vision totally ignores decades of chronic under-funding of health and education that result in meagre salaries for workers. It is strange that WB people who have decent salaries seem to expect public sector workers to continue working 9-5 on a salary not enough to rent a flat –let alone to feed the family or pay for half decent education or healthcare!

Dear Mohga,Thanks for your comment. Of course there was inequality in the MENA region. The point though is that this inequality was not higher than in other middle-income countries, such as those in Latin America, East Asia and Eastern Europe. And we don't find systematic evidence that inequality was rising in MENA during the 2000s. The shopping trips in London you refer to is a sign of wealth inequality. We find that wealth inequality is higher than income inequality. However, here too, we don't find evidence that wealth inequality in MENA was higher than in other parts of the developing world. Yet, only MENA had revolutions,which is why we are suggesting that it was other factors,such as unemployment, that triggered the Arab Spring. Incidentally, the fruit seller who set himself on fire in Tunisia was frustrated because he couldn't get a formal sector job, and because he worked in the informal sector, he was harassed by the police. Finally, teacher absenteeism is not just a function of teacher salaries, but how the salaries are paid. For instance, we find that teachers in NGO-run schools get paid much less, and still show up for work. If teachers salaries were more closely tied to performance, absenteeism is likely to go down (as has been observed in India and elsewhere). I should add that public sector teachers come from the 90th percentile of the income distribution or higher. Shanta

Thanks for the blog. Great, succinct diagnosis. Interesting to contrast it with evaluations of strategies and projects from 2000-2010 - their increased focus on governance, but less on operational impacts/results for social contracts. Poverty reduction and some shared prosperity (though unevenly)occurred, but insufficiently, as the social contracts frayed and then dissolved when opportunities, jobs and public service delivery failed to meet expectations.
But, in any event, what to do now? A contract needs at least two parties, and to be fair and effective, some balance of power or accountability/verification between them. After the revolutions (invasion in Iraq), there were institutional vacuums for capable public service delivery at the state level, except perhaps for Tunisia. In Egypt, Iraq, Yemen and Libya, security institutions or armed militia (remnants of fragmented security institutions) lay in wait as the vacuum engendered even greater physical, social and economic insecurities. So now what? How to use development assistance to help forge new social contracts that encourage legitimacy and accountability? The last three sentences of Shanta's concluding paragraph are in the passive voice. Identifying the actors and the means to support them is probably the operational challenge for MENA's new strategy.