What is a university degree worth in the Arab world? 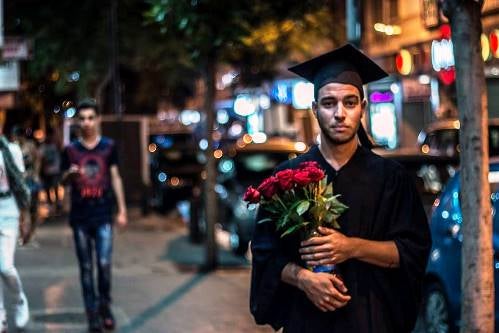 Graduation—a long-awaited day in most students' lives. Yet, according to Amir Fakih, himself a recent graduate from Lebanon’s Notre Dame University, a graduation ceremony also comes with grievances. To illustrate his perception of the future for Lebanon’s young university graduates, he decided to dress himself in his graduation gown doing low-income jobs.

Amir, in his final stage of his university degree, was wandering the streets of Hamra, an educated and well-off district of the Lebanese capital of Beirut, when the idea came to him. Dressed in his graduation gown, he portrayed himself in what he considered potential future jobs: as a cashier in a local food shop, a waiter in a café, a flower vendor on the street, or even a beggar on the pavement.

Even though the young graduate respects all of these professions and roles, his point is that they don’t require a university degree. His purpose was to shed light on realities of life for the newly graduated. “You hit the wall of reality,” he said, “and if you find work it is for the minimum wage.” Amir was given a lot of support from people who could identify with this scenario. His photo collection went viral on social media and received some local media attention. However, and unsurprisingly, according to Amir, there was neither a response nor any other acknowledgement from governmental officials.

Yet, he was hoping it would create a debate. Amir wants to shed light on youth unemployment, which according to The International Labour Organisation (ILO) was as high as 34% among Lebanese age 15–24 years in 2010. Though more recent figures suggest this level may have decreased, the rate remains well over the global average of 13%. According to the ILO report “Towards Decent Work in Lebanon: Issues and Challenges in Light of the Syrian Refugee Crisis” Lebanon’s lack of demand for a skilled educated labor force, in combination with low-standard working conditions, deter young Lebanese from the labor market at home. 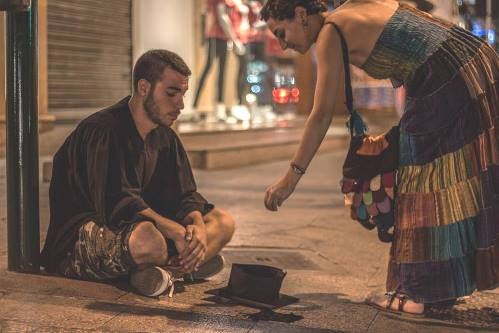 One issue, argued Amir, is that when you begin university you are unaware of the labor market’s needs or what a certain degree will mean for your prospects. Amir felt pressured to study engineering, which besides other professions such as medicine, are considered to ensure a safe future. After a year, however, he switched to study media. It was what he loved, he explained. But the recent graduate wished there had been more information and studies about the Lebanese labor market available to make choices easier for young Lebanese applying to university.

"Fortunately," said Bana Bissat, a recent graduate from the American University of Beirut, "it wasn't difficult finding a job for me after graduation." But her occupation is not related to her studies; she has a degree in linguistics but is now working in digital and social media. She managed to find a job within a month of graduation. Perhaps the fact she graduated during the fall helped, she said, when fewer students are looking for jobs. According to Bana, there is an issue matching new graduates to the labor market. There is a need for educated people, but they just don't know what's out there and how to apply for work successfully.

Another obstacle, said Amir, is knowing the right people, so-called wasta or connections, which is important in Lebanon. Wasta will have an effect on both your career and education. Amir attended a private university because he lacked the right contacts to get into the public university he wanted to go to. For two students with the same qualifications or credentials, it is likely to come down to wasta. Therefore, despite the fact that public universities for Lebanese citizens are free, there is no guarantee you will be accepted. The fees for private universities, on the other hand, are high. 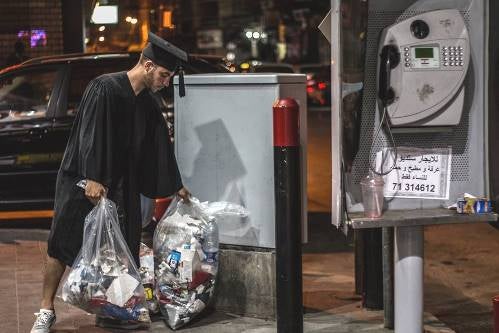 ​Amir’s four–year degree cost about US$32,000. Like other young Lebanese, it was his parents who paid. The high costs, argued Amir, left graduates with no other choice but to take up a low-income job to survive, choose an occupation unrelated to their degree, or try to find opportunities abroad.

Today, many of Amir’s friends who graduated with him either work in relatively low-income jobs, such as a waiter at a café, or apply for employment abroad. With a note of bitterness, Amir admits that he has sent 15 CVs to Dubai. “I am willing to leave,” he says. A Gallup survey in 2010, suggested 37% of Lebanese youth demonstrated a willingness to emigrate permanently. He feels no resentment toward acquaintances who have left to find work in the Gulf. He himself has reached the point where he’s realized you only live once. “I also need to build my future.” Thank you for covering this very interesting subject. Many people around the world have university degrees and are not able to find a job matching their degrees. It is a tough market for university graduates all over the world, yet I think students shouldn't be discouraged from pursuing higher education, while bearing in mind the immediate needs of their countries and the job market.