Why Fatima had to lose her house 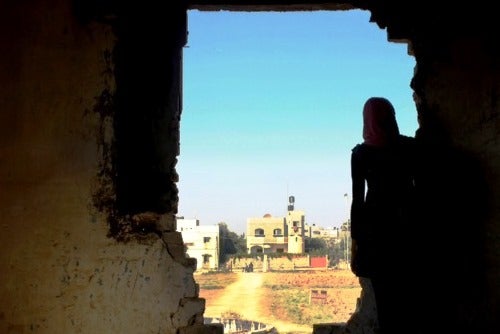 I’ve just returned from a mission to Palestine. During the visit, I met Fatima. She was happily married until last summer, when suddenly she lost everything.

She lived with her husband and step-son in Gaza city. Both she and her husband have decent jobs—jobs that place them in the middle class by Gaza standards. Her stepson is around 11 years old, an active boy who loves soccer and music. A few years back, Fatima and her husband bought an apartment in one of Gaza’s middle class neighborhoods. It was registered in his name alone, something which is standard practice in Gaza and most of the Middle East. As they are happily married, she never felt insecure.

Sadly, during the summer war in Gaza in 2014, their apartment was hit by a rocket that killed her husband. She and her stepson miraculously survived. All the news outlets, including the Israeli media, reported that the attack on their apartment was a mistake—her husband was not the intended target. But how or why it happened does not matter as much as the fact that her husband was killed.

The war ended, and now it came to the distribution of her husband’s inheritance. Because Fatima’s name was not on the title deed for the apartment, and because she has no kids of her own, she has no right to inherit the apartment. Not only does she have to vacate it, she can’t look after her stepson whom she raised for many years either. He has to live in his uncle’s house. Fatima has lost almost everything that’s important in her life …

While the law in most places allows title deeds for land and property to include the names of both husband and wife, in Palestine and many other countries, most men have traditionally refused to put their wives’ names on their titles, even if their wives work as hard as they do for the financing of it. Fatima’s story can be repeated thousands and thousands of times for women around the world when their husbands die, or even if they get divorced.

Some countries have made progress to redress this. Take Vietnam, for example, where the names of husband and wife are included in the title. In fact, the Vietnamese government redesigned the land title form to make sure it had enough space to include both names. Laos and Cambodia did the same. In Laos, under the World Bank-financed land titling project, the government has decided to employ the Lao Women’s Union as part of its adjudication team to help explain to women their rights when they register land.

As a result, all property bought during a marriage is registered in both women and men’s names, and more women than men have land registered in their name alone. In other countries, women’s rights are included in family law and marital properties divided equally whether the wife’s name is on the title or not.

During consultations on the World Bank’s new gender strategy, access to land and property were highlighted as one of the main constraints to women’s economic advancement. The impact assessment of some land titling projects has, in fact, indicated that women are more likely than men to use their title deeds as collateral to borrow money to open new businesses or expand existing ones. So, for women, property rights are not only important to protect them in case of the death of their husband, or their divorce from him, but can have other sorts of economic impact, too—not just on them, but also on their families and others they might employ if they run businesses.

Now, what will it take to explain to women like Fatima that their names should be included on their land or property titles? For this, we may need to start with men … Men should know that their wives and families will be at risk of being dispossessed if something bad happens to them.
Topics
Gender
Social Sustainability and Inclusion
Urban Development
Countries
Algeria
Bahrain
Djibouti
Egypt
Iran
Iraq
Jordan
Kuwait
Lebanon
Libya
Morocco
Oman
Qatar
Saudi Arabia
Syrian Arab Republic
Tunisia
United Arab Emirates
West Bank and Gaza
Yemen
Regions
Middle East and North Africa