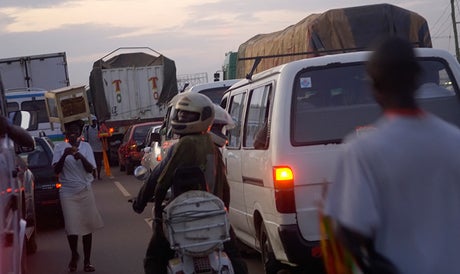 Playing charades with my nine-year-old over the weekend, I was surprised when he gave black smoke as a clue for diesel. When I was his age, I probably would have given bus or truck as a clue.

The word diesel derives from the inventor Rudolph Diesel, who developed a heavy-duty engine in Germany in the late 1800s. Diesel fuel is any fuel used in diesel engines. The combustion of diesel fuel provides the power to move heavy-duty vehicles, such as buses and trucks. It also results in emissions of fine particles, often in the form of black smoke, along with a number of other chemical compounds.

In 2012, the World Health Organization (WHO) declared the emissions from diesel combustion to be carcinogenic. Last month, the WHO released data showing that more than 7 million deaths are caused by indoor and outdoor air pollution. The black smoke from diesel engines is a part of outdoor air pollution contributed by buses and trucks, as my son would tell me after we finished our game.

What he does not know as yet is that a study by a team of international scientists in 2013 noted that diesel smoke consists primarily of black carbon, which has a strong global warming impact on the climate; nearly 3,300 time more than that of carbon dioxide over a 20-year time period.

The one simple and clear message from the triangulation of current scientific evidence is that reducing diesel emissions provides health and climate benefits.

A new World Bank report (pdf) released last week at the Working Group meeting of the Climate and Clean Air Coalition links this scientific evidence to policy by assessing the economic impact of addressing black carbon emissions from transportation projects. It is one of the first attempts to provide a framework for monetizing the health and climate benefits of black carbon emission reductions, and was undertaken by researchers from the International Council for Clean Transportation.

The results of four simulated project interventions show that health benefits alone are usually enough to justify project interventions although the inclusion of black carbon in some cases helps make a stronger economic argument in favor of the intervention. However, the results are sensitive to the assumptions about the time horizon for global warming potential and the discount rate for the social cost of carbon.

As I indicated in my previous post, with stronger scientific evidence and better analytical tools becoming available, there is a real possibility of changing the paradigm towards more comprehensive economic analysis that captures multiple benefits of project interventions. This new report represents one attempt in that direction, while also highlighting the challenges and limitations of doing so.  A forthcoming World Bank report next month pushes the analytical boundaries even further. So stay tuned!