China, the biggest source of CO2 emissions globally, accounts for more than 27 percent of the world's emissions. China is the first developing country to control CO2 emissions through a cap-and-trade system. Once a national carbon market is established, which could be as early as 2017, China will overtake the European Union (EU) to become the biggest carbon market in the world. The Chinese market will significantly alter the balance of power in global carbon markets in the mid-term. Significant challenges remain, and the IFC, a member of the World Bank Group, is helping China to overcome them with a project in Shenzhen that addresses key barriers to carbon trading.

Once a liquid carbon market has been created, trading will mostly happen via forward and futures contracts. These instruments help companies to protect themselves against volatile prices and to hedge their carbon position. In the EU, exchange platforms emerged as one of the main mechanisms aimed at simplifying transactions, reducing risk and facilitating transparent pricing. As trading platforms, exchanges can facilitate price discovery and offer hedging products.

The financial sector and financial institutions (FI) play a fundamentally important role in an emissions trading system. It is to be expected that most companies in China will trade with the help of intermediaries; only large emitters will trade directly at an exchange. Thus, FIs will be in a position to offer trading-related services, as well as advisory products, to clients subject to mandatory CO2 regulation.

The seven local low-carbon pilots which are operating currently in China are generating valuable experiences and lessons which can help to broaden and deepen the carbon market. Nearly all regulated companies complied with their emissions ‘caps’ in the first pilot year, which is important in terms of achievement of environmental integrity. Although challenges remain, the future market will likely be underpinned by fairly reliable data and information.

But carbon could only be traded spot on the exchanges; trading was very thin in the first year of the pilots; there were significantly different prices from pilot to pilot; and some pilots were showing almost flat prices. Chinese decision-makers paid initially little attention to the dynamics and the trading aspects of the emerging carbon market, including FI intermediation, but the incipient stage of the market was noted more recently by the central government, not least by the National Development and Reform Committee (NDRC). 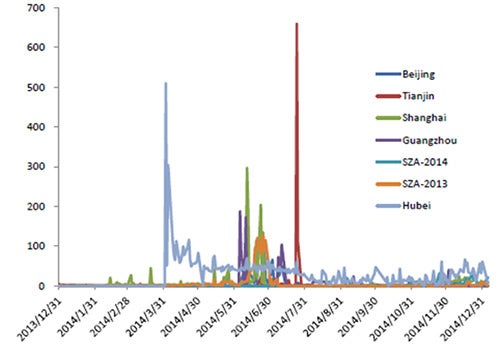 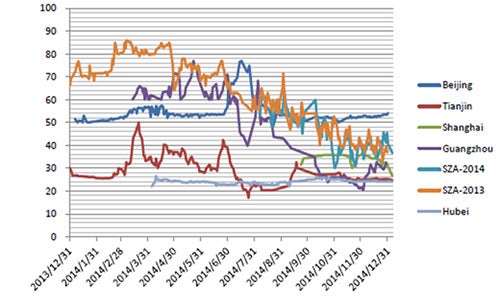 Such teething problems are only to be expected. The Chinese government should be congratulated for working hard to make this new market a success. The early lessons from the IFC Advisory Services (AS) engagement with the pilot in Shenzhen (SZ) in Southern China illustrate some of the main barriers or bottlenecks as far as market participants and trading are concerned:

The IFC AS program in Shenzhen is addressing key barriers to carbon trading. The first phase aims to pilot non-spot trading products. IFC is working with the SZ emissions exchange and FIs to design and pilot contracts that could grow the local market. A stakeholder platform has been organized to support the development of the SZ pilot by providing global best practice, offering opportunities for learning and experimentation, supporting stakeholder dialogue, and engaging with authorities. The second phase of the program will build the capacity of two to three FIs to offer advisory, brokerage and risk management services to clients and to manage CO2 price risk to their loan portfolios. As the market matures, we aim to support development of carbon-related business lines at FIs, including investment products to enhance trade, liquidity and efficiency. thank you for making aware of this.