Displacement camps: For better or for worse?

It is often believed that camps for internally displaced people (IDPs) and refugees, run by international humanitarian actors, provide better services than those available locally outside the camps. (See, for instance, the World Bank’s flagship report on displacement.) While camps are often crucial for the displaced populations in the immediate term, they are not a tenable option when displacement becomes prolonged , which is often the case across countries in sub-Saharan Africa, among others. Then, it becomes important to help IDPs and refugees integrate, to some degree, into local markets and systems. However, if humanitarian actors, particularly the international community, are providing better service access and quality in camps, then is shifting to local systems causing a net loss in welfare?

In a new World Bank report on Informing Durable Solutions for Internal Displacement, we collected micro-data from five African countries to inform policy questions such as this one. Across Ethiopia, Nigeria, Somalia, South Sudan, and Sudan, we examine how outcomes differ inside and outside camps. All five countries have data that represents camp-based IDPs (or refugees in the case of Ethiopia) and non-displaced populations.

In Nigeria and Somalia, we also have data for IDPs living outside camps. While in the other countries IDPs have been displaced for less than five years on average, in Sudan the displacement is protracted, with the average IDP household having been displaced for 15 years. Thus, camps in Sudan have acquired settlement-like features. We examine outcomes across these different situations to better inform if camps are indeed offering better services than are available locally.

We look at outcomes on service delivery and poverty, where camps could provide stronger service, as well as outcomes in labor-force participation and social perceptions, which can be a challenge for sequestered populations. The results show a clear picture: access to basic services is lower in camps, while labor-market outcomes vary with country. Further, internally displaced people in camps feel less safe and perceive lower social integration with local communities than do those displaced outside camps . 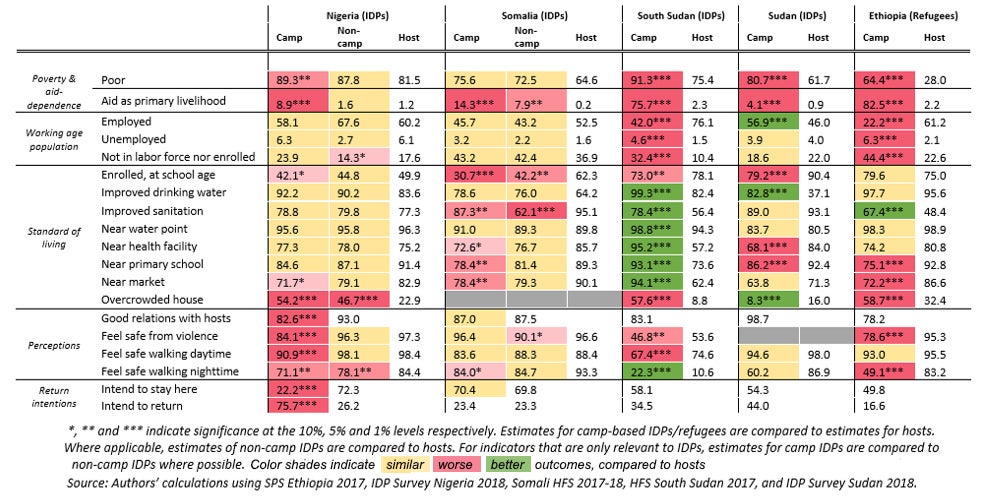 Contrary to notions of better service provision in camps for displaced people, service access is worse for those in camps than for hosts and internally displaced people outside camps . For instance, in Nigeria, camp-based IDPs face more overcrowding, are further away from the nearest market, and camp-based children are less often enrolled in school, than hosts . In Somalia, both camp and non-camp IDPs have lower school enrolment and less improved sanitation facilities than hosts, and camp IDPs are additionally further away from the closest health facility, primary school and market.  This contradicts the notion that camps provide close access to key amenities. The lower school enrolment (four in five countries) and the further access to the nearest market (3 in 5 countries) indicate threats to socio-economic integration with surrounding communities, in goods markets, labor markets and future work prospects (through education).

Even in cases where camps provide higher-quality facilities, serious overcrowding brings overall access to a lower level than hosts.  In three of the four countries with overcrowding data, camp-based IDP households are extremely overcrowded, much more so than hosts and IDPs outside camps. In South Sudan, where facilities are improved and amenities closer among camp IDPs, the difference between overcrowding of hosts and IDPs is also the steepest. According to WHO and UNICEF standards, improved sanitation facilities should not be shared by multiple households.  After accounting for toilet sharing, the rate of improved sanitation falls sharply in camps – more sharply than for hosts. Ultimately, WASH facilities in camps of South Sudan do not necessarily guarantee better quality or access.

Displaced people in camps in South Sudan and Ethiopia have extremely low labor force participation. They have lower employment, higher unemployment as well as higher rates of being “idle”  by neither participating in the work-force nor being enrolled in education. These two countries also have the highest rates of aid-dependency as a primary source of livelihood (76 percent in South Sudan and 83 percent in Ethiopia).

In Somalia, Nigeria, and Sudan, labor force participation and employment rates are comparable or slightly better for the camp-based IDPs. However, camp-based IDPs in all three countries depend more on aid as a primary source of livelihood, than non-camp IDPs and hosts. This could indicate that camp-based IDPs, even if employed, find it more difficult to find self-reliant livelihoods.

Social cohesion outcomes might have influenced IDPs to locate themselves in or outside camps. A low level of initial socioeconomic capital can be further eroded from being sequestered from local markets and culture. Building a sense of safety and facilitating increased social relationships with hosts would help achieve local integration.

These results are helpful for a number of reasons: Camps are a good activity for those who are displaced and they are a kind of first aid but we have to be carefull, because camps sometimes can be a way of spreading some deseases like VIH, some deseases due to lack of hygien,.... carefullness is required when installing camps. Those who are educated can be employed internally in the camps to mobilize people and establish the codes of conducts,....

To avoid a kind of lazyness that can be developed by people as they are eating without working, for those who are able, the host government should group people in different cooperatives and associations, they open account for savings especially, create small business using the aid they may receive from concerned UN for them to develop the attitude of working. The hosting government should mobilize them telling them that they should always work to overcome that kind of life because once they will live on their own, encouraging them for work,.... yet they need to receive every day's aids!