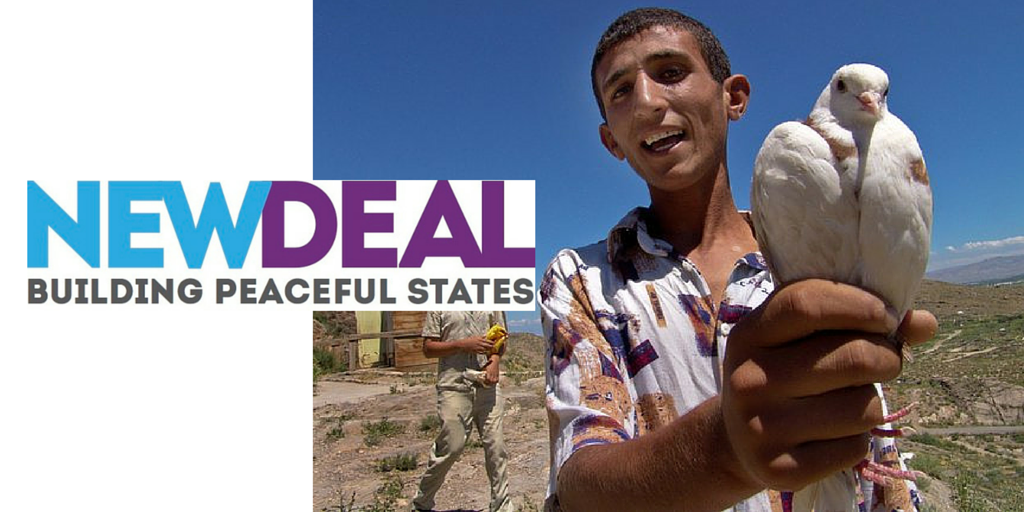 The message of the  g7+ group of conflict-affected and fragile countries is clear. Solutions to conflict and poverty only work when they are nationally-owned and led . That might seem obvious, but the international community has learned the hard way that externally-imposed priorities do not add up to peace and sustainable institutions that drive development.

The New Deal for Engagement in Fragile States is a set of partnership principles for ending conflict and poverty. Agreed by the g7+ member countries, it commits them to goals for inclusive politics, security, justice, laying the foundations for economic growth, and collecting revenues to provide services. These peacebuilding and statebuilding goals are the basis for fighting extreme poverty . The “deal” part of the equation hinges on compacts that bind together government, society and international partners towards the collective pursuit of these common goals, and mutual accountability for progress.

In 2015 and 2016, I led a team that reviewed the New Deal and the progress it has made so far. Suffice to say, simply signing up to the New Deal is not the panacea. Since its launch in 2011, the New Deal has been criticized for being too technical, for low uptake among national political leaders and international partners, and for not sufficiently involving society. But the New Deal could strike the definitive blow against extreme poverty in the next fifteen years . One billion people could escape extreme poverty by 2030 if countries can resolve conflict and crisis, and build inclusive, accountable and effective enough institutions. Writing off the New Deal before it has had time to gain momentum should be inconceivable. In fact I find the opposite; we need to redouble our efforts behind it, and fast.

The New Deal has already made one very important difference. The g7+ are global norm entrepreneurs. The New Deal has empowered the g7+ by elevating their messages on the world stage. In 2015, the world agreed that building peaceful and inclusive societies, access to justice and accountable, effective and inclusive institutions is a global development goal. This is history. It's the first time poor and fragile countries have shaped global goals, and it's the first time the world has agreed that peace, justice and institutions are universal development priorities.

Inside the g7+ countries, implementation has not always been easy. Ministries of Finance and Planning have proven crucial champions of the New Deal. They have found innovative ways to incorporate and measure progress in peacebuilding and statebuilding in national development strategies in Democratic Republic of the Congo, Liberia, Sierra Leone and Timor-Leste. In 2013, Somalia and the international community signed a New Deal Compact, which has helped to put government in the driving seat and to align aid to national priorities for peacebuilding and statebuilding.

But parliaments, the private sector, private citizens groups and media have too often been missing from the equation. South Sudan’s relapse into conflict, for example, followed a dialogue between government and partners that addressed building the state’s public finance mechanics, but not politics, security and justice; and opposition and civil society did not have a seat at the table.  Without inclusive processes to set priorities, we can have little confidence that “what” we are pursuing and “how” will build peace – we are operating on too many assumptions.

These challenges reflect a need for political leaders to recommit to the principles of the New Deal, and especially to political processes that bind all relevant actors into a shared vision for what needs to happen and how to build peace and fight poverty. Leading national processes to assess the causes of crisis and to agree solutions is not easy, and so the g7+’s own fragile-to-fragile cooperation initiative promises to be an increasingly powerful mechanism for sharing advice and experience between g7+ countries.

International partners can do much more to fulfill their side of the New Deal bargain . g7+ governments and societies need time and political space to resolve conflict and crisis, and coherent, predictable and timely assistance to develop national institutions and to fill finance gaps. Yet, I found limited evidence of behavior change in the international community as a result of signing on to the New Deal. The breadth of the new Sustainable Development Goals could further fragment aid and development partners and so make matters worse, while the growing financial pressures on the humanitarian system can only be eased through investing more in fragile countries to prevent crisis and build self-reliance in the first place.

It is time to commit to a new package of smarter aid modalities that build institutions, resilience and self-reliance, and that are counter-cyclical to help countries in times of crisis. Actors should agree a traffic light system to hold themselves more accountable for innovation in support of nationally-owned and led plans.

If the New Deal didn't exist, it would need to be invented to strike the definitive blow against global poverty . It’s time to galvanize behind it, by mobilizing governments, citizens and partners behind a new generation of politically-led strategy, planning and programming, and new global and regional partnerships for leaving no-one behind by 2030. The world must now rally to the g7+ under the global pledge of Sustainable Development Goal 17 to partnerships for the goals. Why doesn't anyone of the World Bank or UNHABITAT looks at our www.peace-factory.org solution as it provides the best practical solution to fight extreme poverty. Could someone please explain why this is overlooked and give me a contact to start working on the solution.

thank you very much gan , the article is very interesting that we can refer to.
eye care softgel