Are the poor getting poorer? A tale of two hemispheres

A casual reader might be forgiven for being confused by the global conversation around poverty and inequality these days.  On the one hand, there is relentless talk about rising inequality, and the ever-larger income shares captured by the top 1%. In the United States, this trend – which is very pronounced – is accompanied by falling wages at the bottom of the distribution, at least according to Figure 4 here. This seems to confirm the timeless adage that the rich are getting richer, while the poor keep getting poorer.

On the other hand, at the global level, we have documented substantial declines in absolute poverty, from over 35% of the population living under U$1.90 per person per day (in PPP terms) in 1990, to approximately 11% by 2013. There is a growing consensus that, over the same period, inequality among all the world’s citizens has also declined, probably for the first time since the Industrial Revolution.

So, how widespread is this tendency of the poor getting poorer? Is it exclusively a post-1980 US phenomenon?  Or is it a more general trend, bucked only by the rise of China and India which would, in this view, fully account for falling global poverty and inequality?

In a recent paper, we revisited the World Bank’s Global Database of Shared Prosperity (GDSP), whose latest wave comprises information on growth rates both for the bottom 40% and for the average income in the population, for 83 countries, and accounting for 75% of the world’s population. Though an update is due in the Fall, the latest wave of comparable surveys currently available covers the years from 2008 to 2013 – a period that encompasses the global financial crisis of 2008-2009, and the European debt crisis of 2010-12.

For that period and sample of countries, a fairly stark picture emerges – which can be seen in the Figure below. Rising poverty was not an exclusive North American phenomenon. Nor was falling poverty an exclusively Chinese and Indian story. But it does seem fair to say that there was a marked hemispheric divide between North and South.  On the whole, the incomes for the bottom 40% of the population were rising in low and middle-income countries, particularly in the global South. And they were falling or stagnant in high-income countries, including the US, most of Western and Central Europe, and a sizable part of Eastern Europe. Income growth for the bottom 40% (

was positive in all countries in our Asian sample, averaging 5.0% in East Asia, and 3.7% in South Asia.  In Latin America, the average growth for the bottom 40% was 4.1%, and

was positive in all countries in our sample, except Honduras. Sample coverage in MENA and sub-Saharan Africa was much lower, but income growth for the bottom 40% was positive in most of those countries as well. (In the paper, we also look at how

compared with growth in average incomes, the so-called “shared prosperity premium”, across regions.) 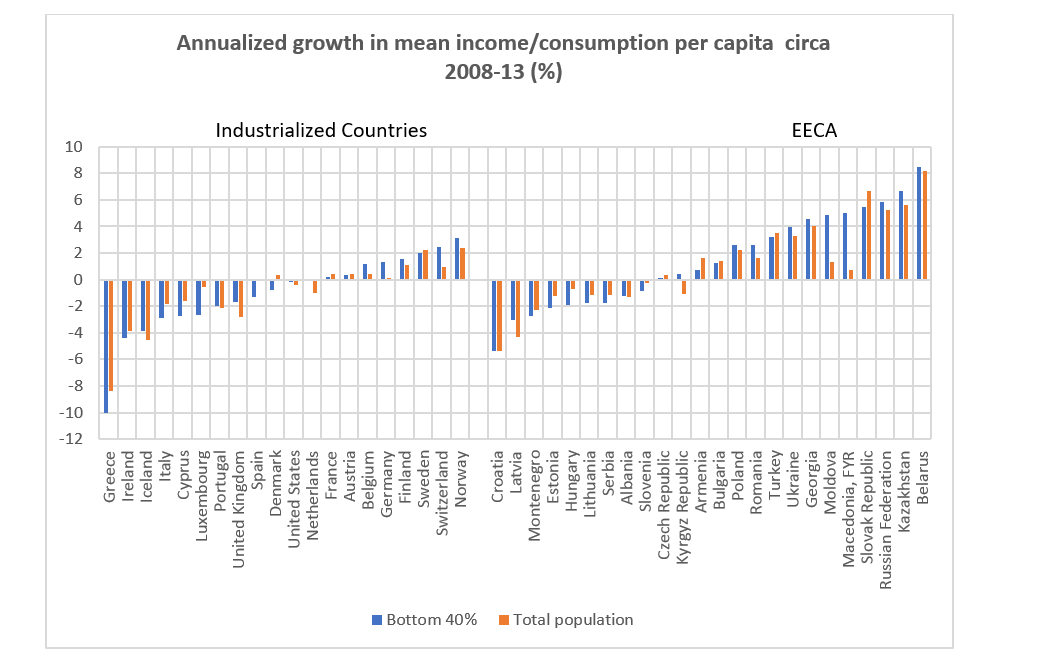 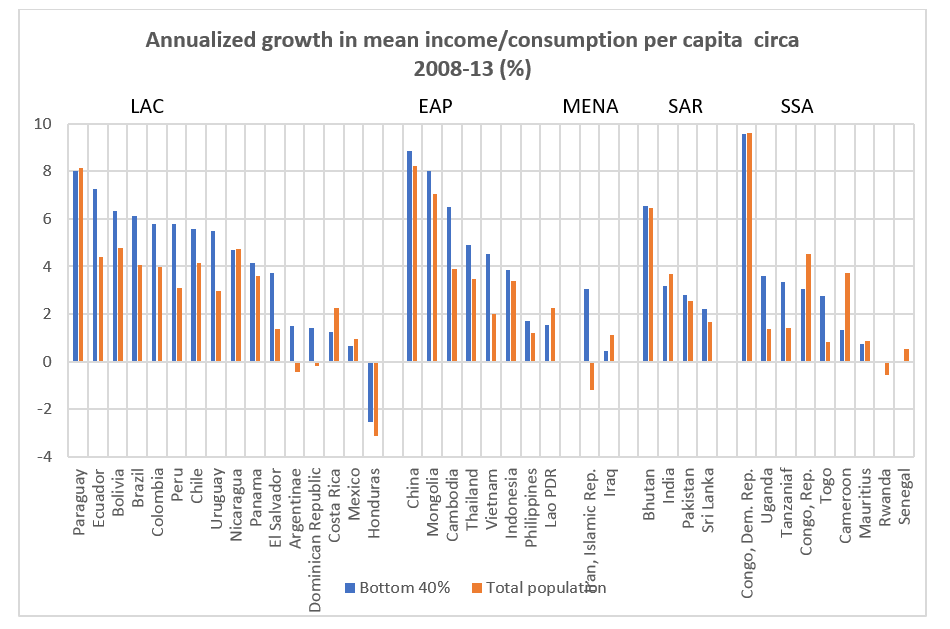 However, the low coverage in Africa and the Middle East obscures one important caveat to this story of a hemispheric divide in the fortunes of the poor. Because, by construction, the GDSP requires comparable household surveys a few years apart, it is biased against the inclusion of very low capacity countries, including fragile states.  And as we have argued elsewhere, fragility and conflict are key predictors of rising poverty.  In that blog post, we noted that between 2002 and 2013 poverty headcounts rose or stayed the same in only 36 the 152 countries for which data is available. And the largest increases were in countries that suffered from civil wars or deep political crises, including South Sudan, the Central African Republic, Guinea Bissau, and Yemen.

Still, the lesson seems to be that, in the five years leading up to 2013, the incomes of the poor were rising in most developing countries – except those plagued by serious manifestations of fragility: conflict, severe political instability or chronic mismanagement. It was primarily in richer countries in the ‘global North’ that the twin crises of the global financial crisis and the European debt crisis - sometimes jointly described as the Great Recession - took their toll among the poor. There were exceptions, like Norway, Switzerland and Sweden. But over that period, rising poverty was a predominantly Northern hemisphere phenomenon.

What we cannot yet say is whether this rather extreme form of poverty convergence (minus FCVs) was a feature of the unusual macroeconomic conditions of the time, or whether – even if in a milder form – they are likely to persist after 2013. What we know of the period since 2014 is not encouraging. Commodity prices declined sharply in that year, and remained low for years thereafter, with repercussions for the growth performance of a number of commodity exporters, chiefly in Africa and Latin America. At the same time, first the United States and later Europe emerged from their own doldrums. Whether or not a hemispheric divide in “shared prosperity”, or the income growth of the bottom 40%, will remain present in the data from 2014 onwards remains to be seen.