Breaking the STEM ceiling for girls

Although countries have dramatically closed gender gaps in education and labor force participation, gender differences within education and employment persist. Women earn less income and work in lower paying occupations and sectors than men do. Women are less likely to become entrepreneurs, and, when they do, they typically run smaller, less-profitable firms. These gender gaps in entrepreneurship, incomes, and productivity persist at all levels of development, despite a multitude of policies aimed at eliminating them. And as countries move forward with closing glaring gender differences, other gaps become visible.

Women’s participation in science, technology, engineering, and mathematics, commonly known as STEM, is one of these areas, and one that seemingly refuses to budge. Although just as many girls as boys are completing high-school level education, and more women graduate from university worldwide than men, women remain a minority in the STEM fields. In the United States, for example, women earn only about 35 percent of the undergraduate degrees in STEM, a number that has remained unchanged for the past decade, even though they account for almost 60 percent of college graduates. And that statistic hides differences across STEM fields, with women earning about 40 percent of the degrees in mathematics, but only 18 percent of those in computer sciences or engineering. 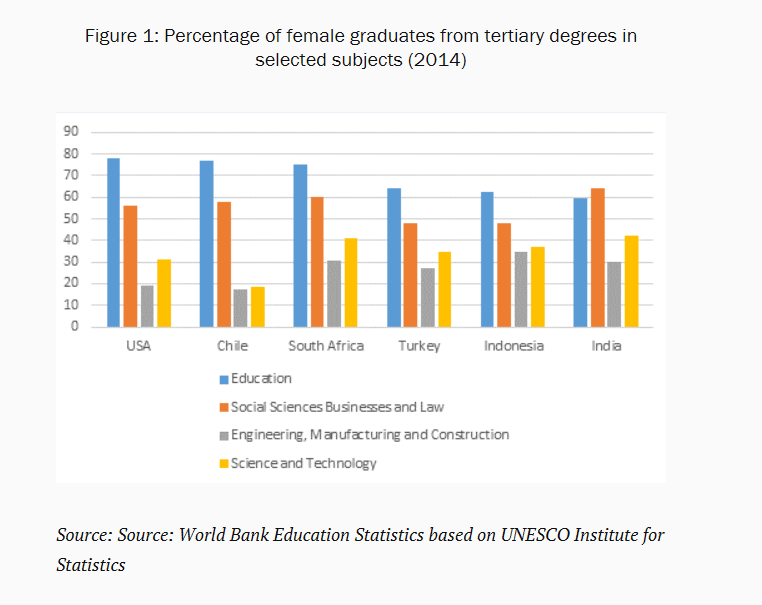 Worryingly, things are not getting better: The proportion of women receiving engineering or computer science degrees in the United States actually fell between 2004 and 2014, and the picture is similar around the world. In 2013, only four countries in Europe could claim to have at least 15 percent of all STEM graduates be female, while in Chile in 2014, it was 20 percent. And even when women manage to get a STEM degree they are less likely to work in that field.  According to the latest U.S. census, only 1 in 7 women with a degree in STEM actually works in that area. This holds true for most countries.

The reasons for this systematic underrepresentation are multiple and complex, but three things seem to matter most: 1) Aspirations that are molded by social norms and parental expectations; 2) information failures that affect the decision to enter and stay in a STEM field; and 3) institutional factors that constrain women’s ability to enter a STEM job.

Ingrained biases start at an early age and become even more pronounced as girls move through school and enter into the world of work. Girls are rarely encouraged to study math or science, and often internalize beliefs that boys are simply better in these fields. For example, even when girls do better than boys in math and science in grade 4 on a standardized test like TIMMS, this difference tends to disappear by grade 8, with only a few exceptions. Parental expectations seem to shift at that age, too.  But even if they manage to overcome these initial barriers, young women who do excel in science or mathematics are often daunted by the prospect of being the only girl pursuing a STEM career, as well as by the possibility of future discrimination by employers. There are not many female role models or mentors that can help young women navigate and ultimately overcome these concerns.

So, why should we care? At a very basic level, it is a question of fairness. Women should have the same opportunities as men to choose to pursue and succeed in a STEM career. But there are also strong economic arguments for caring about the issue. If women and men are equally able, then the fact that women are not entering these fields of study or working in these sectors and occupations means that talent is being misused and that economies are less productive than they could be. While the literature on this is still emerging, some recent work suggests that correcting gender segregation in employment and in entrepreneurship could increase aggregate productivity globally by as much as 16 percent.

Getting more people, generally, in STEM is a proactive view of what the future of the workforce brings. In the U.S., for example, employment in computer and information technology occupations is projected to grow 12 percent from 2014 to 2024, faster than the average of all occupations. Getting more women into STEM occupations could translate into greater gender equality in incomes and better economic prospects for women and their families, as these jobs generally pay more and gender gaps in these occupations are lower than in other sectors. If the young women of tomorrow are to take advantage of those opportunities, the foundation for their STEM careers needs to be laid today.

Solutions don’t need to be costly; they can start by creating school and job environments that allow girls and women to be comfortable and confident within the STEM fields. Tested interventions in developed countries that have made role models available to girls, introduced inclusive language in the classroom, brought in non-stereotypical role models, and given information about STEM workplaces show a lot of promise. In developing countries, we need to keep learning more, but it is clear that information and teachers, for example, are key. Seemingly small changes in behavior and aspirations can go a long way toward building a more equal future for today’s girls and boys.