In the past 30 years, China has achieved phenomenal economic growth, an unprecedented development “miracle” in human history. Since the institution of its reforms and Open Door policy in 1978, China’s gross domestic product (GDP) has been growing at an average annual rate of more than 9 percent (figure 1). In 2010, it has surpassed that of Japan and become the world’s second-largest economy. 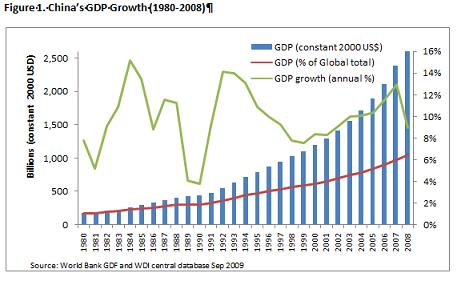 How did China achieve this rapid growth? What have been its key drivers? And, most important, what can be learned from China’s success? Policy makers, business people, and scholars continue to debate these topics, but one thing is clear: the numerous special economic zones (SEZs) and industrial clusters that emerged after the country’s reforms are without doubt two important engines of China’s remarkable development.

The SEZs and industrial clusters have made crucial contributions to China’s economic success. Foremost, the SEZs (especially the first several) successfully tested the market economy and new institutions and became role models for the rest of the country to follow. Together with the numerous industrial clusters, the SEZs have contributed significantly to national GDP, employment, exports, and attraction of foreign investment. The SEZs have also played important roles in bringing new technologies to China and in adopting modern management practices. It is estimated that as of 2007, SEZs (including all types of industrial parks and zones) accounted for about 22% of national GDP, about 46% of FDI, and about 60% of exports and generated in excess of 30 million jobs.  In 2007, the 54 HIDZs hosted about half the national high-tech firms and science and technology incubators. They registered some 50,000 invention patents in total, more than 70 percent of which were registered by domestic firms.  They also hosted 1.2 million R&D personnel (18.5 percent of HIDZ employees) and accounted for 33 percent of the national high-tech output. Over the 15 years since the formation of HIDZs, they have accounted for half of China’s high-tech gross industrial output and one-third of China’s high-tech exports. In addition, the ETDZs are also responsible for another one-third of China’s high-tech industrial output and exports.

The key experiences of China’s SEZs and industrial clusters can best be summarized as gradualism with an experimental approach; a strong commitment; and the active, pragmatic facilitation of the state. Some of the specific lessons include the importance of strong commitment and pragmatism from the top leadership; preferential policies and broad institutional autonomy; staunch support and proactive participation of governments, especially in the areas of public goods and externalities; public-private partnerships; foreign direct investment and investment from the Chinese diaspora; clear goals and vigorous benchmarking, monitoring, and competition; business value chains and social networks; as well as continuous technology learning and upgrading.

Despite the great success of China’s special economic zones and industrial clusters, they also face many challenges to sustaining their success. These challenges include: moving up the global value chain; the sustainability of the export-led growth; environmental and resource constraints; institutional challenges; and lagging social development, among others.

Given these major challenges, China will need to adjust its current development strategy and move toward a more competitive and sustainable development paradigm. The major policy directions for helping China to achieve this goal could include:

• Gradually moving toward a more knowledge and technology-based development model;
• Putting more emphasis on domestic markets and consumption as a source of growth;
• Upgrading the SEZs and industrial clusters through technology innovation and learning;
• Implementing strict environmental standards; and
• Further deepening institutional reforms

China has come a long way in a short time, and its rise is the most compelling economic story of the 21st century. Although it still faces many challenges and difficulties in sustaining its rapid growth, it has launched itself on an irreversible growth path and is poised to become a global economic powerhouse and a key economic and financial player. And in today’s global crisis, China has become an important engine to drive the world out of the downturn.

Finally, it’s important to note that China’s experience with special economic zones and industrial clusters has been very successful up to date but needs to be adapted locally. While the “China model” offers very useful experiences and lessons for other developing countries, everything has to be put into a local context; there is no panacea for development. Can anyone tell me whether there are any SEZs in Yunnan Province?

To what extent is China currently incentivising industries from the United States to locate within China-based SEZs today? Are these companies forming industry clusters within the Chinese SEZs? Can these firms sell product directly into the Chinese market? What are the comparable numbers of United States-based national economic zones and do they contain Chinese originated industries which manufacture products imported into the United States? Thanks,