Food prices in international markets have spiked three times in the past five years: in mid-2008, early 2011 and mid-2012 (Figure 1). The first of those spikes – when rice prices more than doubled – prompted urban riots in dozens of developing countries. It may have contributed even to the unrest that led to the Arab Spring. The most common government response was to alter trade restrictions so as to insulate the domestic market from the international price rise. And the most common justification for that action (tighter export restrictions or lower import barriers on food staples) was that it would  reduce the number of people who would fall into poverty. Not only are food prices politically sensitive, but many poor people are vulnerable to higher food prices, because the poorest people spend a large fraction of their incomes on food. 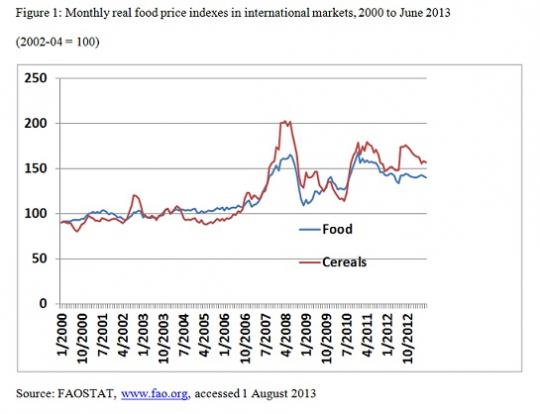 Did those trade policy actions actually reduce the number of poor people that the world would otherwise have had? Certainly the cost of living may have risen less for net buyers of food enough to prevent some of them from falling below the poverty line in policy-responding countries. However, such policy actions have two other effects that have the opposite impact on poverty. One is to reduce the number of poor net sellers of food whose incomes otherwise would have risen enough to lift them out of poverty. The other is more subtle: tighter export restrictions or lower import barriers on tradable food staples exacerbate the international price spike, thereby raising the possibility of more people falling into poverty in other countries than are saved from that fate in the policy-responding countries—and reducing the effectiveness of the policy in the responding country.

That second and more-subtle effect ensures that, even when it may appear to each individual country that its policy action has been successful in reducing the rise in its number of poor, that so-called success may be an illusion. The apparent success of the policy can result from comparing the rise in the food price domestically with the actual rise in international markets. What is relevant, though, is what the international price rise would have been had no countries altered their trade restrictions. Indeed, it has been shown that if both exporting and importing country groups happened to insulate to the same extent, domestic prices in both country groups would rise just as much as if no country had insulated (Martin and Anderson 2012; Anderson and Nelgen 2012). This is akin to a crowd of people of equal height standing up in a stadium trying to see better.

In reality, however, countries intervened to different extents, so that the impact of price insulation on poverty in any one country depends on both the actions taken by that country and the collective impact of interventions by all other countries – as well as on the structure of each economy, and particularly the proportions of households near the poverty line in each country that are net buyers and net sellers of staple foods.

The net effects on national and global poverty of such domestic market-insulating policy actions could be favorable or unfavorable. On the one hand, if countries where the poor are most adversely affected by higher food prices insulate more than countries where the poor are less vulnerable to (or would benefit from) food price spikes, it is possible that such insulation would reduce the number of people driven into poverty. If countries where producers and consumers are least able to deal domestically with such shocks transmit a smaller portion of the increase in international food prices to their domestic markets, the adverse global poverty impact of the original shock will be less (Timmer 2010).

On the other hand, a more pessimistic possibility is that many of the countries that insulate against shocks to international food prices are countries for which the impacts on domestic poverty of higher food prices are minor or even pro-poor. High-income countries, for example, are well-placed to absorb price shocks. This is because of the small shares of farm produce in the expenditures of their consumers, their producers’ access to risk management tools such as futures and options markets, and their relatively well-developed social safety nets. Even so, some high-income countries continue to use insulating policy instruments such as variable import levies, or even just specific tariffs whose ad valorem equivalent varies inversely with the border price. Another example of this possibility is where large, poor, food-importing countries—for which insulation is more expensive because it turns their terms of trade against them—insulate less than a small but otherwise similar country, and hence may not avoid adverse poverty outcomes because of inadequate domestic social safety nets.

It is clear from these examples that, other things equal, alterations in trade restrictions could increase or reduce the national and global poverty impacts of higher international food prices. Only by looking at data on the changes in agricultural distortions during periods of rapid increases in international food prices, and estimating the impacts of consequent domestic price changes on poverty in different countries, is it possible to ascertain the net effects on national and global poverty.

In a recent paper (Anderson, Ivanic and Martin 2013) we do so by first looking at data on the consumption patterns and income sources of low-income households in a sample of 30 developing countries, where three-quarters of the world’s poor live, to assess which commodities are likely to be important in affecting poverty through changes in their commodity prices. We provide new estimates of agricultural price distortions to assess the extent to which countries insulated their domestic market from the changes in international food prices during 2006–08. Then, we use a simple model to compare the actual changes in domestic prices with those that would have occurred in the absence of price-insulating policies. Finally, these price scenarios are used to assess the impacts of food price changes on poverty both with, and in the absence of, price-insulating policy behavior.

This approach allows us to make a much broader assessment of the impacts of price-insulating behavior on national and global poverty than has previously been available. We find that market-insulating actions added substantially to the spike in international prices for rice, wheat, maize and oilseeds. As a result, while domestic prices rose less than they would have without insulation in some developing countries, in many other countries they rose more than had there been no such insulation.

Our study finds that the actual poverty-reducing impacts of insulation are much less than their apparent impact. If the impact of policy actions on international prices is ignored, we estimate that 82 million people would have been saved from falling into poverty after subtracting the net sellers of food who would have been lifted out of poverty. However, when the impact of policy actions on international prices is taken into account – as it needs to be – the estimated net effect on world poverty in 2008 is actually positive, albeit small and not significantly different from zero. The biggest difference is in South Asia: the estimated number saved from poverty falls from almost 70 million to virtually none once international price effects are properly accounted for.

Table 1: Poverty effects of countries insulating themselves from the 2006-2008 spike in international food prices

Since there are domestic policy instruments such as conditional cash transfers that could now provide social protection for the poor far more efficiently and equitably than variations in border restrictions, we suggest it is time to seek a multilateral agreement to desist from changing restrictions on trade when international food prices spike, and to focus on measures that can actually reduce—rather than merely rearrange—the adverse impacts of high food prices on the poor.