Do host communities see improved livelihoods through agricultural diversification and commercialization as a response to refugees’ inflow?

Accommodating refugees can be challenging for the host communities that are already experiencing high levels of poverty, precarious livelihood conditions, low access to public services, underdeveloped infrastructure—and in the case of Ethiopia—a large internally displaced population. Although existing research looks at the impacts of hosting refugees on range of outcomes, more studies are needed to determine exactly what circumstances produce benefits or challenges in hosting communities .

Located in one of the most conflict and natural disaster-prone region of the horn of Africa, Ethiopia is the third-largest refugee-hosting country in Africa. The country has a long history of welcoming refugees fleeing conflicts, political repression, forced military service, drought, and conflict-induced food insecurity in their country of origin. Refugees originate primarily from South Sudan, Somalia, and Eritrea and are accommodated in 26 refugee camps located across five regions of Ethiopia - Gambella, Benishangule-Gumuz, Somali, Afar, and Tigray.

A new study, Livelihood impacts of Refugees on Host Communities: Evidence from Ethiopia, assesses the impacts of hosting refugees on the livelihood strategies of households in host communities focusing on diversification and agricultural commercialization. These are two common strategies that people in developing countries adopt to maintain or improve their livelihoods and welfare. A dataset of 3390 households collected between September 2017 and August 2018 was used to create two measures of livelihood diversification as either a primary activity or a secondary activity ; and two measures of livelihood commercialization —the sales value of crop or livestock products.

Figure 1. Summary of results mainly on the effect of refugees’ presence on livelihood diversification and commercialization (a percentage change in primary and secondary activity diversification and crop and livestock sale in response to a one percent increase in refugee presence). 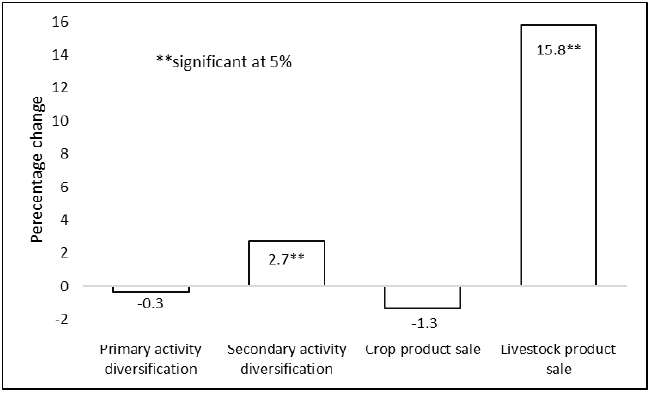 Our findings show that refugees bring substantial benefits to host communities by creating more jobs that people can engage in as a secondary occupation, triggering an increased demand for livestock products . We found no effect on the diversification of activities as a primary occupation and the commercialization of crop products. This can be attributed to the fact that the refugees’ presence created jobs in different activities, and the host communities pursued these jobs as a secondary occupation. The positive effect on the commercialization of livestock products—but not on crops—can be due to the fact that refugees are often provided crop products, such as cereals, for sustenance and tend to demand livestock products due to their customary diets. Access to market and household’s increased engagement in different livelihood activities contribute to these effects. Our findings also show that male-headed households seem to benefit more than their female counterparts through increased diversification of activities as a secondary occupation and commercialization of livestock products, as female household members are usually responsible for housework and are less able to pursue outside employment.

That said, the findings are not the same across regions. While mostly positive impacts were seen in regions that host relatively smaller proportions of refugee populations, a negative impact was observed in Gambella, a region with most of the refugee population in Ethiopia. The regional difference can be attributed to heightened competition between host and refugee communities for resources and opportunities when the refugee population is very large, which could outweigh the observed positive effects on livestock and employment.

It is important to note that the study was conducted while the existing Refugee Law of 2004 in Ethiopia prohibited refugees from working and moving freely. In 2019, the government repealed this law, which could potentially intensify competition between refugees and local communities for work and other services and consequently reduce the observed positive effects in most refugee hosting regions. Designing programs that create more jobs and building or enhancing public infrastructure in host communities— such as the World Bank’s Development Response to Displacement Impact Project (DRDIP)—are essential to mitigate potentially negative consequences felt by refugees and hosting communities. Economist with the Health, Nutrition and Population (HNP) Global Practice of the World Bank Group