What would you do if you won a billion dollars? Would you just buy more hamburgers for lunch or pick up some extra pairs of socks? Probably not. You would think bigger: maybe a boat, a mansion, a fancy car – luxury goods. Or you might try to make your life easier with a housekeeper, a driver, a chef – luxury services. This switch in the shopping list is so common that economists have a nerdy name for it: “non-homothetic” preferences. That is, people buy different things when they get more money.

It turns out that this dynamic is relevant for development, as we (Bill Battaile, Richard Chisik, and Harun Onder) found in “Services, Inequality, and the Dutch Disease,” a World Bank Policy Research Working Paper published this year. In particular, countries that see a rapid influx of income following a natural resource discovery – say oil or diamonds – are vulnerable to this pattern in a way that could hinder their overall chances of economic growth. 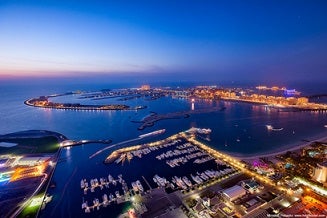 Here’s how it works: Consider a country that faces a natural resource boom. When the boom hits, people get more money. These people don’t just buy more of what they had already been buying. In fact, they increase their demand for luxury goods and services: Mansions pop up on the coastline, chauffeurs replace bus rides, and private chefs join household staffs. This phenomenon can be seen the world around, from the man-made islands off the coast of Dubai to the tony beachhouses in Ilhasa, Nigeria.

This personal-spending tendency has impact on the economy overall. When the country’s population buys more luxury goods, luxury imports increase – not a big deal. But services are different – they generally need to be produced locally. In this case, there is a structural change in the domestic economy: labor moves into industries providing these services. A guy who works at a furniture factory, for example, might see that mowing the lawn of the nearby mansion is more lucrative and change professions. But that movement of labor also means, on a broader scale, that the country stops producing some of the goods it used to produce. Because the furniture factories are no longer as profitable, the country imports furniture – something it used to make well enough to export – from other places.

This is all fine and good until the natural resource runs out. When that happens, the country overall has less income to purchase luxury services, so those are no longer a good source of employment and income. In addition, the once-productive manufacturing sector – which used to make furniture or cars or computer monitors that were traded all over the world – has stagnated for lack of investment. International competitors have moved in and learned how to be more productive in those sectors; they have closed off opportunities for domestic producers to enter or re-enter these industries. This is known as a Dutch disease effect: the shrinking of a tradable-goods sector in response to a large influx of income (from a natural resource or other sources, such as foreign aid). The economy suffers long-term losses.

But that is not the entire story. There’s another important dynamic at play here: income distribution. In our paper, we show that if the newfound wealth of a natural resource boom is concentrated in fewer hands, the Dutch disease effect is worse. That is, the manufacturing sector’s stagnation is more pronounced.

But, why is that so? The answer lies in so-called “non-homothetic” preferences. Let us compare two cases: in the first one, an oil discovery creates 10 billionaires. In the second, it creates 10,000 millionaires. Naturally, each individual billionaire exhibits a more dramatic shift toward luxury purchases. If each one has a million dollars to meet his or her basic needs, that leaves 999 million dollars to spend on islands, mansions, boats, and household staff. So the country’s overall demand for luxury goods and services increases more in that case than in the case of 10,000 millionaires. This demand, in turn, diverts more labor away from the tradable (often manufacturing) sectors.

Using our model, we obtained another interesting result: It is often believed that one cause of Dutch disease effect is a rise in real wages. Well, this is not necessarily true. In fact, somewhat paradoxically, a country could see stagnation in its tradable sectors even if its wages decrease compared to its trading partners. This is mainly because those sectors also lose their productivity over time when labor moves into sectors with more short-term priority, e.g. luxury services.  (Of course, all of this reasoning is backed by math and equations; those interested can read more about the methodology in our paper.)

So what is the lesson and what can be done? Our results suggest that Dutch disease can arise simply from the spending patterns – the shift toward luxury goods and services – that accompany new wealth. We also find that income distribution matters, and that the more concentrated the wealth, the bigger the damaging effects. All of this resonates with recent research that finds correlation between poor governance and the ill effects of natural resource discoveries.

To be sure, what can be done is a complicated question. Policy prescriptions are difficult to specify on a broad scale. But our research seems to support some recent ideas. Marcelo Giugale and Shanta Deverajan, for example, advocate universal and direct payments to the populations in resource-rich African countries. Although we do not analyze this option formally in the paper, our main results demonstrate that more equity in the distribution of natural resource rents could mitigate negative Dutch disease dynamics. Another element to consider is tax policy: In particular, a consumption tax on non-tradable luxury services would be a much better policy than one that directly impacts trade, such as a levy on imported manufactured goods.

Our model clearly touches upon a few sensitive issues. But the stakes are high. The poor in many of the world’s most vulnerable countries suffer a double-burden: they cannot benefit from their country’s natural resources and they pay the highest price – loss of jobs and purchasing power – when their home economy loses the power of its manufacturing sector or other producers of tradable goods and services. How can we change this plight of resource-rich stagnation? For many economists, this is a billion-dollar question. Just think of what you could do with all that money.