Many laws prohibiting a range of gender violence have been ineffective in reducing the prevalence of harmful practices.  This is mainly due to the influential role that deeply rooted social norms—one of multiple and sometimes competing normative orders people adhere to—play in determining behavior and outcomes.

Gender-based violence (GBV) reflects power inequalities between women and men. Women and girls are more commonly the victims of GBV—a manifestation of power imbalance tilted in favor of men that characterizes many, mostly patriarchal, cultures around the world.  Collectively shared norms about women’s subordinate role in society and violence against them can also perpetuate the power imbalance. In the upcoming World Development Report 2017 we discuss how norms can reinforce existing power inequalities in society and how change can happen.

Female genital mutilation (FGM), sex selection, child marriage, dowry-deaths, honor killings and widowhood rituals are harmful cultural practices supported by various social norms and beliefs. FGM is traditionally believed to preserve virginity until marriage and nonconformity to the practice may lead to social exclusion, stigma and the inability to find a husband. Sex selective abortions, infanticide, neglect of female children, mistreatment and severe health consequences for women who did not bear male children are manifestations of pervasive son preference typically grounded in rigid patriarchal family systems and the special role of sons in religious rituals. Dowries—a practice that strengthens son preference as it leads parents to consider daughters as liabilities— have often been linked to brutal violent acts against women as a way to extract more resources from the wife’s family, including harassment, domestic violence, murders, and suicides, leading to the infamous dowry-deaths. Honor killings involve murders, often committed by close relatives in the name of “family honor”, to sanction the refusal to enter an arranged marriage, an attempt to marry outside their own social group, or having been the victim of rape. Widows are sometimes victims of violence from in-laws and humiliating rites and isolation as part of the mourning process to demonstrate grief and innocence for their husband’s death.

Prevalence
The prevalence of harmful cultural practices remains stubbornly high in some developing countries, reflecting the stickiness of adverse beliefs and norms. While the overall prevalence of FGM is on the decline, it still is widely practiced in many countries in Africa, the Middle East, and some countries in Asia (like Indonesia) with an estimated 200 million girls and women in 30 countries believed to have undergone some form of FGM (UNICEF, 2016). Child marriage— most common in South Asia and sub-Saharan Africa—is estimated to affect about 250 million women who were married before their 15th birthday (UNICEF, 2014).

Skewed sex ratios at birth particularly in China and India (and to a lesser degree even among Asian immigrants in the United States and Canada) are strongly indicative of pre-natal sex selection. The sex ratio (number of male births per female birth) has been increasing sharply in recent decades and, according to recent estimates, is 1.11 in India and 1.16 in China, well above the biologically normal range of 1.03 to 1.06 (Jayachandran, 2015).

Dowry deaths are mainly found in South Asia. In India alone, the National Crime Records Bureau of the Government of India reports 8455 cases of dowry deaths and an additional 122,877 cases of “cruelty by husband or his relatives” in 2014, but many cases likely go unreported. Honor killings are reported in some countries in South Asia and the Middle East and North Africa—estimates of the number of women killed are largely unavailable, however the practice appears to be on the rise in countries like Pakistan and India due to increasing shortage of brides (UNFPA, 2000; Pande, 2015).

Being unmarried, with widowhood an important contributor, is associated with 40 percent of the excess mortality among women aged 20-64 (approximately 620,000 women) each year in developing regions (Anderson and Ray, 2015). Indicative of widows’ disadvantage are survey data from Nigeria, according to which 42 percent of widows reported to have been dispossessed of their late husband’s property and 15 percent (24 percent for widows in the highest wealth quintile) reported to have been maltreated by their husband’s relatives (NPC and ICF International, 2014).

Support for violent practices
The continuation of these practices is oftentimes supported by both women and men. The power imbalance can become internalized and violence even acceptable for the victim, who may be afraid of challenging shared norms out of fear of backlash (or may not even be aware of alternatives to the norm).

Figure a) shows the share of women and men who report favoring the continuation of FGM in 16 sub-Saharan African countries where the question was asked to both genders (in interpreting the data, it is important to keep in mind the caveats of using self-reported information). Countries along the 45-degree line have similar approval rates by gender; countries above (below) the line have higher support among women (men). First, it is not surprising that higher support for the continuation of FGM is typically found in countries where prevalence is higher (with the exception of Burkina Faso where 76 percent of women have undergone FGM but only about 10 percent of women or men support the practice). Second, support is generally similar among women and men, but considerably higher among women in Guinea, Sierra Leone, Eritrea, and Chad. Greater support is typically expressed by women who have themselves undergone FGM.

Figure a) FGM should be continued 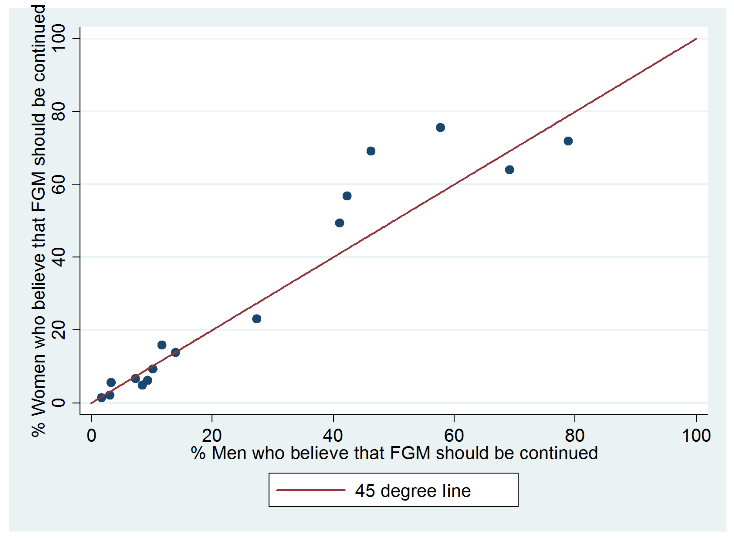 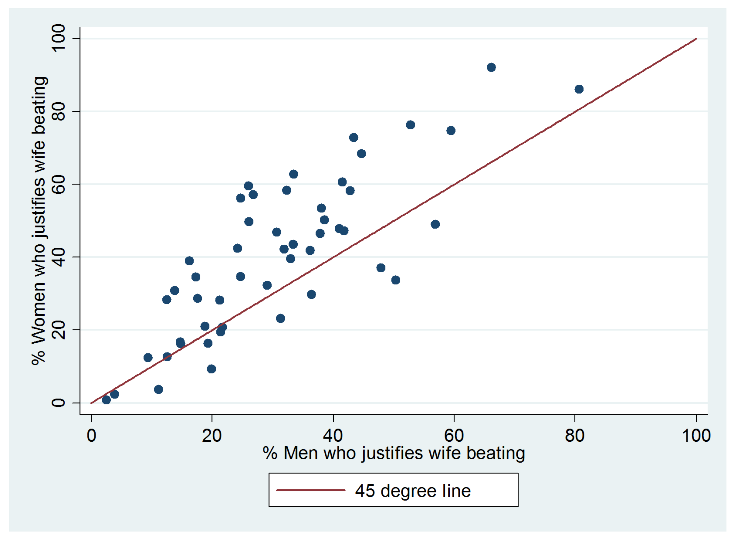 Persistence and social inter-dependence
Biased formal laws restricting women’s economic opportunities reinforce (and are reinforced by) discriminatory gender norms which in turn strengthen the power imbalance. While many countries have recently carried out reforms to remove legal restrictions, about 90 percent of the 173 countries reviewed in a recent study still have at least one legal gender difference in the books, including laws requiring husband's permission to work, travel, or register a business and prohibitions to work in certain industries or hours (Women, Business and the Law).

As long as discriminatory norms are broadly shared by a critical mass of individuals who expect that the others will conform to the practice, there will be no incentive to deviate from it. A shift requires coordination of beliefs, as each individual’s action depends on the expectations of what others will do. Strategic interdependence of individual beliefs will maintain the unequal distribution of power. Other forces may lead to persistence that do not specifically depend on social reciprocal expectations, but rather on private motives that vary a lot across individuals and may require specific policy interventions (Efferson et al., 2015).

Many laws aimed at protecting women from violence remain ineffective. Nevertheless, legal prohibitions can have the intended effects by enabling those desiring to abandon the practice to do so. For example, education campaigns and advocacy work were important preexisting conditions for abandoning FGM among those disapproving the practice following an anti-FGM law in Senegal (Shell Duncan et al., 2013). Domestic violence legislation can also bring a ‘cultural shift’ counteracting the notion that it is a personal or private problem.