The World Bank forecasts that global economic growth will strengthen to 2.7 percent in 2017 as a pickup in manufacturing and trade, rising market confidence, and stabilizing commodity prices allow growth to resume in commodity-exporting emerging market and developing economies.  Growth in advanced economies is expected to accelerate to 1.9 percent in 2017, a benefit to their trading partners. Amid favorable global financing conditions and stabilizing commodity prices, growth in emerging market and developing economies as a whole will pick up to 4.1 percent this year from 3.5 percent in 2016. Nevertheless, substantial risks cloud the outlook. These include the possibility of greater trade restriction, uncertainty about trade, fiscal and monetary policy, and, over the longer term, persistently weak productivity and investment growth.

Global growth is projected to strengthen to 2.7 percent in 2017, as expected. Emerging market and developing economies are anticipated to grow 4.1 percent – faster than advanced economies.
Global Growth

Gains in global growth come as trade growth picks up to around 4 percent in 2017 from a post-crisis low of 2.4 percent in 2016 – even though it is expected to remain below pre-financial crisis levels.

Global Trade
Growth in the United States and Japan is expected to accelerate in 2017 and Euro Area growth set to remain robust. (Figure 1.3.A) Stronger advanced economy growth, even at modest rates, still has substantial growth benefits to emerging market and developing economies. 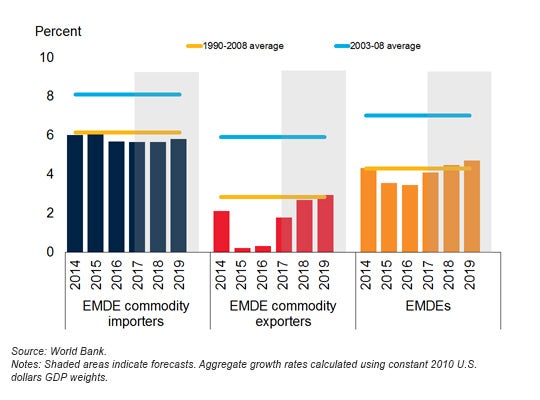 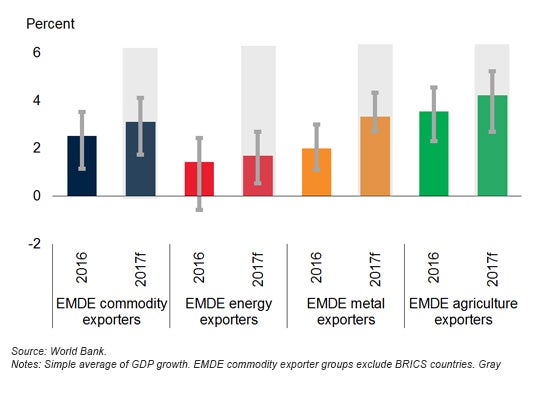 Growth among the seven largest emerging market economies – Brazil, China, India, Indonesia, Mexico, the Russian Federation, and Turkey— is anticipated to substantially strengthen and outpace growth in the Group of Seven Major industrialized economies into 2018. This will also benefit other EMDEs. 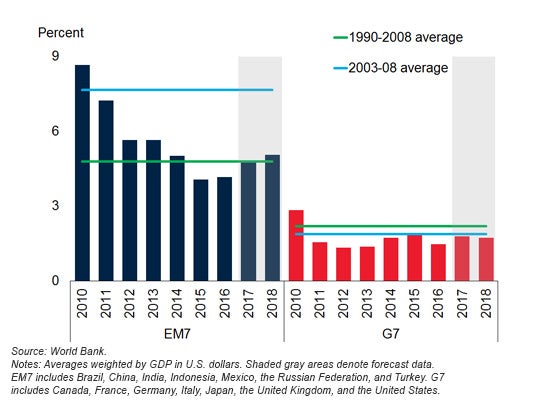 Import and export growth has rebounded in China, contributing to the upturn in global trade.
Export and Import Growth

Oil prices are forecast to rise above 2016 levels, but the resilience of the U.S. shale oil industry is expected to keep oil price rises in check.  Technology and productivity improvements have made U.S. oil producers profitable even at lower global oil prices.
Break-even Prices for U.S. Shale Oil Regions
The outlook is fragile and downside risks remain above historical averages.  The possibility of reversals to trade liberalization of the past several decades is one such risk. Mentions in online searchces of the words and phrases “protectionism,” “trade restrictions,” “trade war,” and “import tariffs” have increased.
Discussion of protectionism 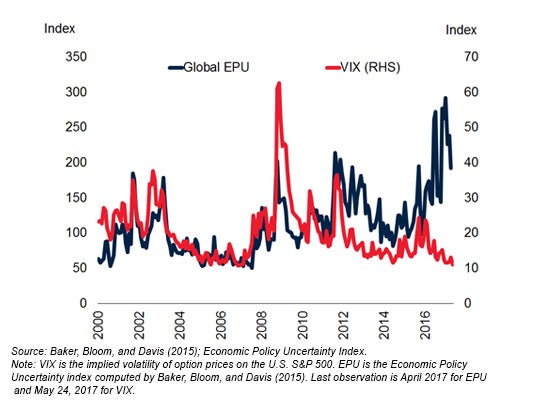 Debt and deficits among emerging market and developing economies are rising, particularly in those that are heavily dependent on commodity exports. This makes them vulnerable to spikes in borrowing costs. 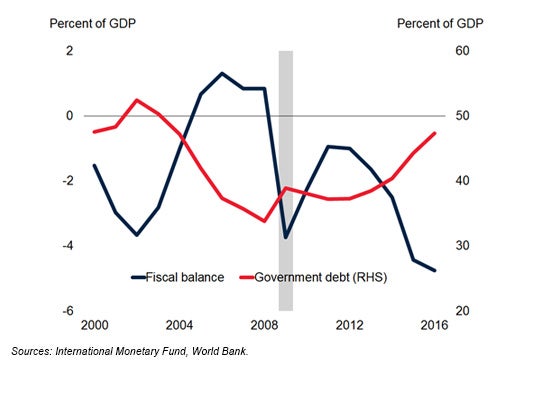