How to Avoid Middle Income Traps?

With Aaron Flaeen and Saurabh Mishra

Many developing countries have successfully made the transition from low-income to middle-income status, thanks to rapid economic growth, but have subsequently got stuck in a middle income trap. A great deal of research has been done on what explains much faster growth in the developing world than in the developed world (Acemoglu et al 2011; Baldwin 2011; Commission on Growth and Development 2008; Rodrik 2013; UNIDO 2011). But little is known about why so few countries succeed in making the transition from middle-income to high-income status (The Economist, 2013). This is a worrying trend and an issue of major concern, especially because the majority of poor people now live not in low-income but in middle-income countries (Chandy and Gertz, 2011; Sumner and Kanbur, 2011). So what is a middle income trap? What should policy makers do?

We have examined these questions in the context of Malaysia, whose structural transformation from low to middle income has made it one of the most prominent manufacturing exporters’ in the world. However, in a competitive global economy, like many other middle-income economies, it is sandwiched between low-wage economies on one side and more innovative advanced economies on the other.

What is a Middle Income Trap?

The middle income trap is a development stage that characterizes countries that are squeezed between low-wage producers and highly skilled and fast-moving innovators. Cost advantages in manufactured exports that once drove growth start to decline in comparison with other lower-wage countries. Caught between these two groups, many middle-income countries are without a viable high-growth strategy. They are faced with new challenges, including social cohesion, a large pool of young people in search of jobs, as well as millions who still live in misery and poverty, particularly in lagging regions.

As global, institutional, and structural environments evolve, prior strategies no longer remain effective at generating an equivalent rate of economic growth. Transition becomes more difficult when the status quo prevails, and the emerging competitive sectors do not have a seat at the table.  Many middle-income countries tend to make two common mistakes: either they cling too long to past successful policies, or they exit prematurely from the industries that could have served as the basis for their specialization process (Agénor and Canuto 2012; Aiyar et al. 2013; Eichengreen, Park, and Shin 2013; Felipe 2012; Gill and Kharas 2007; Nungsari and Zeufack 2009; OECD 2007). Timing and smooth transition are the two keys to success.

The world is experiencing a third industrial revolution with the globalization of services being at the forefront (Blinder 2006, Ghani, 2010). Due in part to lower transport costs, services are now characterized by growing tradability and a potential new source of growth. The number of services that can be transported digitally is constantly expanding–education; health; insurance; audits; call centers; and many more. The list of modern services that can be traded is exploding, and productivity growth in services is increasing at a much faster pace than in manufacturing.

Figure 1 compares output per worker in Malaysia in agriculture, manufacturing and services sectors during the past two decades. Although all three sectors have experienced an upward trend, productivity growth in the manufacturing sector trumps the other two sectors. Good infrastructure, sound institutions, global integration, and skills have benefitted the manufacturing sector. Its strategic location and historical role as a regional hub for commercial interactions with the West has given Malaysia a long history of international trade in manufacturing. However, the record for Malaysian services exports has been less successful. 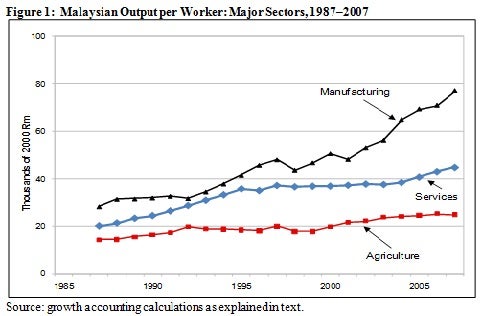 Figure 2 compares the sectoral contribution to total labor productivity growth in Malaysia, with China, India, Korea, and the United States. For the two East Asian countries and India, the results broadly agree with popular perceptions of the regions: there is a dominant contribution of the industrial sector in both Korea and China, while India relies mostly on services for overall productivity growth. As a high-income country with a large services sector, the United States also records high contributions from services along with minimal benefits from reallocating labor among the sectors. Malaysia appears to fit somewhere between India, the United States, and the East Asian countries. 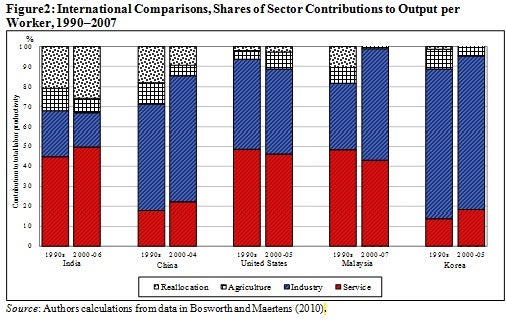 Figure 3 compares the export of modern and traditional services from Malaysia with other countries. Brazil, China, India, Singapore, and Thailand have all experienced a much faster decadal growth in export of modern services (and traditional services) compared to USA. The exception is Malaysia which experienced a slower growth in modern service export compared to USA. 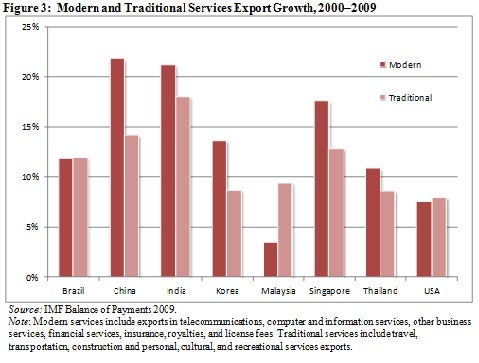 A large gap in productivity exists between manufacturing and services in Malaysia, and this gap has only accelerated in recent years. However, this gap is no inevitable consequence of a country’s economic evolution. In other words, there is no intrinsic characteristic of manufacturing that translates into inevitable productivity growth. Rather, in the current global environment, “industrial versus nonindustrial” is no longer the appropriate distinction for designating high-productivity/low-productivity production. The key designation is “modern versus traditional” activities. Therefore, rather than advocate for a particular sector as the source of stronger growth in Malaysia, there is a stronger need for broad structural transformation; that is, moving to higher productivity production in both goods and services.

Policy makers should promote structural transformation, entrepreneurship, and innovation to begin reaping the benefits of information networks and skilled labor before the gains from cheap labor and knowledge spillovers are exhausted. Rapidly expanding the secondary and then tertiary education system will be critical in producing graduates with the skills that employers require. Highly skilled workers and professionals are an indispensable ingredient of high, valued-added, modern services and manufacturing.

The range of modern services that can be digitized and traded globally is constantly expanding. India has been a pioneer, but many other emerging markets are finding it easier to generate productivity growth in services than in industry. This does not happen automatically. Although the same set of general non-distortionary policies is as important for modern services as for goods, specific strategies for services matter, like market integration and the technological changes in information networks. Services expansion provides an alternative growth escalator for emerging markets like Malaysia to escape the middle-income trap.
Malaysia and other countries facing the middle-income conundrum will need to expand the modern sectors. This would work in practice, when traditional sectors with low productivity shed labor and high productivity modern sectors (be they in goods or services) grow and hire more labor. Both processes are needed if a country is to climb out of the middle-income trap. But this process of structural reform can be tricky: structural reforms can be slow and complex, or fast and easy, depending on the ownership of the program, implementation capabilities, and a macroeconomic stance that provides fiscal and political space to implement the program.

Being a Chinese citizen, this is how I feel about China right now. The Chinese government and the economy of China has improved significantly over the years. However, a lot of people are still working with 25 cent labors for extended hours, while many tech firms reaps the profit.

Education is the most fundamental infrastructure and quite enough to pay the cost of high income transition.

Many thanks for this article.
The key words of this contribution are all gathered in the following sentence:
"Policy makers should promote structural transformation, entrepreneurship, and innovation to begin reaping the benefits of information networks and skilled labor before the gains from cheap labor and knowledge spillovers are exhausted."
We hope our politicians will read your contribution. Especially in Africa, where they are more busy diverting national income rather than making it grow.
Cordially.