How land rights institutions affect the path to productive urbanization

The industrial revolution in Western Europe and North America soon triggered both increased urbanization and accelerated economic development, placing countries in these regions onto paths of sustained income growth over the following three centuries. Economists have long pointed to the crucial role that favorable institutions played in triggering and supporting these historic changes. Surprisingly, however, very little attention has been given to the role played by property rights in land in the interrelated processes of urbanization and growth.

Looking back in more detail at the long process of urbanization in the now developed countries, it is notable that, in many cases, formal land property rights were only gradually phased-in. This progressively stimulated the development of manufacturing activities by lowering transaction costs for the transfer of land to the emerging industries that were locating in cities, and made investments more secure and thus more productive. The strengthening of institutions defining and facilitating the enforcement of land property rights seems to have had a very considerable positive effect on economic efficiency.

A key question is thus the extent to which the dynamics of urbanization in developing countries will follow or will diverge from the experience of North America and Western Europe. Understanding this issue requires looking at the historic dissemination of urban land property rights in developing countries. Although figures on residential informality—defined as the situation where urban land is held without a formal property right—are very hard to come by, they can be approximated by data on slums that are believed to be highly correlated with informality (one of the potential criteria that define a slum according to the United Nations is precisely the high prevalence of households with insecure land tenure). Optimistically, looking at these data over the past 15 years (Fig. 1), we see a decrease in the prevalence of slums in almost every developing country for which the data is available, which might be interpreted as indicating advances in property rights systems.

Nevertheless, this is not the case for all countries and a phenomenon of “urbanization without formalization” seems to remain an important feature of some urbanizing low-income countries. In African cities especially, it is broadly estimated that informality remains high, at between 60 and 80 percent of residential housing. This could relate to a number of institutional factors ranging from underdeveloped legal frameworks and enforcement mechanisms governing land transactions, to the lack of political will to reform land rights systems that are only accessible to the rich and benefit only a small rent-seeking elite. 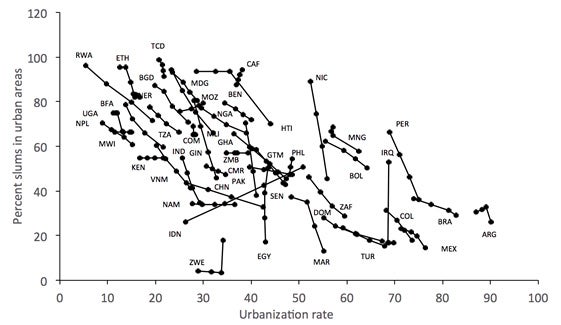 Will informal city growth turn out to be a transitory feature (as the slum data seems to suggest) or could it remain a persistent feature, at least of some developing economies?

Our study proposes the first theory that explicitly accounts for the joint dynamics of urbanization and the evolution of land property rights. We model urbanization through the migration of heterogeneous households from a rural area to a city. The prevalence of land tenure informality is determined by urban dwellers’ decisions as to whether and when to purchase a land property right. As land prices increase with in-migration of industry and with influxes of people into the urban area that generate productivity and income growth, securing a land title becomes more desirable. However, formalizing land plots may be unaffordable for less productive workers who then choose to postpone their decision to formalize, although this makes them vulnerable to land grabbers who can displace them and seize their plot.

Our theory can account for a variety of urbanization scenarios depending on institutional quality (the cost and enforcement strength of land property rights), the potential for urban agglomeration effects, and macroeconomic uncertainty. Contrary to the optimistic view of slum resorption, and in line with the observation that “informality may be here to stay”, the theory indicates plausible contexts in which land tenure informality remains common in the long run. The theory also can be used to explore the dynamic impacts on urbanization and economic growth of policies affecting the cost of land tenure formalization and the level of protection against evictions.

Our analysis sheds lights on situations where some level of informality is actually socially desirable. This is because, under certain conditions, informality may provide access to the city to low income workers who would not be able to contribute to the urban economy if they had to purchase formal property rights in order to live in the city. In this context, eviction of informal dwellers would reduce economic efficiency by removing their contributions to the urban economy. Land policies that reduce the cost of land tenure formalization, or protect informal dwellers against evictions can actually stimulate productivity and have long-term welfare improving effects.
Topics
Urban Development