Interest rate caps: The theory and the practice

Ceilings on lending rates remain a widely-used instrument in many EMDEs as well as developed economies. The economic and political rationale for putting ceilings on lending rates is to protect consumers from usury or to make credit cheaper and more accessible. Our recent working paper shows that at least 76 countries around the world, representing more than 80% of global GDP and global financial assets, impose some restrictions on lending rates. These countries are not clustered in specific regions or income groups, but spread across all geographic and income dimensions.

Interest rate caps are not static, but are an actively used policy tool. Since 2011, we find at least 30 instances when either new interest rate caps have been introduced or existing restrictions have been tightened. Over 75% of those changes occurred in low- or lower-middle-income countries. This outweighs the five instances when restrictions have been removed or eased and indicates that countries increasingly limit the maximum level of lending rates.

This taxonomy is illustrated in the figure below. 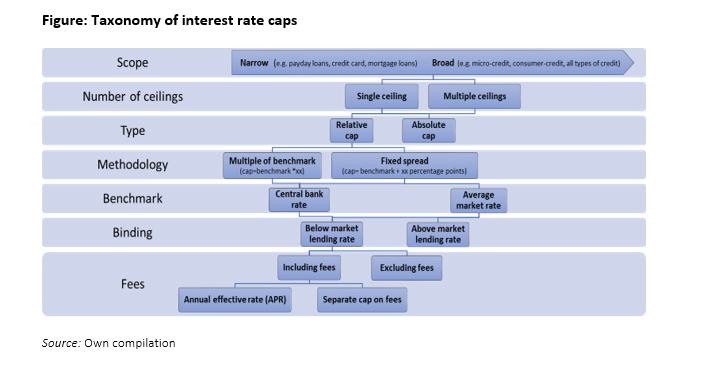 Effects of interest rate caps
Establishing the causal effects of interest rate caps is challenging due to the heterogeneity of caps used and endogeneity concerns, but economic theory points to several possible side effects. Country case studies on Kenya, Zambia, Cambodia, the West African Economic and Monetary Union (WAEMU), India, and the United Kingdom show that effects and side-effects depend on the type and specification of the cap. In light of the possible unintended consequences of interest caps, alternatives and complementary measures to interest rate caps should also be considered. These include measures to foster competition, reduce risk perception, overhead costs, and cost of funds. Consumer protection and financial literacy measures are also important measures, especially if interest rates are meant to protect consumers from usury rates.
Topics
Financial Inclusion
Financial Sector
Countries
Cambodia
India
Kenya
Zambia A very good summary of the subject. We are seeing the effects of what you have laid out here affect market loans for infrastructure in Kenya.