The 2018 World Development Report (WDR), Learning to Realize Education’s Promise, launched this week.  While it draws on research and collective experience—both from within and outside the World Bank—it also draws on the personal experience of the team members, including the two of us.  What inspires the focus on learning for all is that we both have seen the possibilities of widely shared learning, but we’ve also seen what happens when those possibilities aren’t fulfilled. 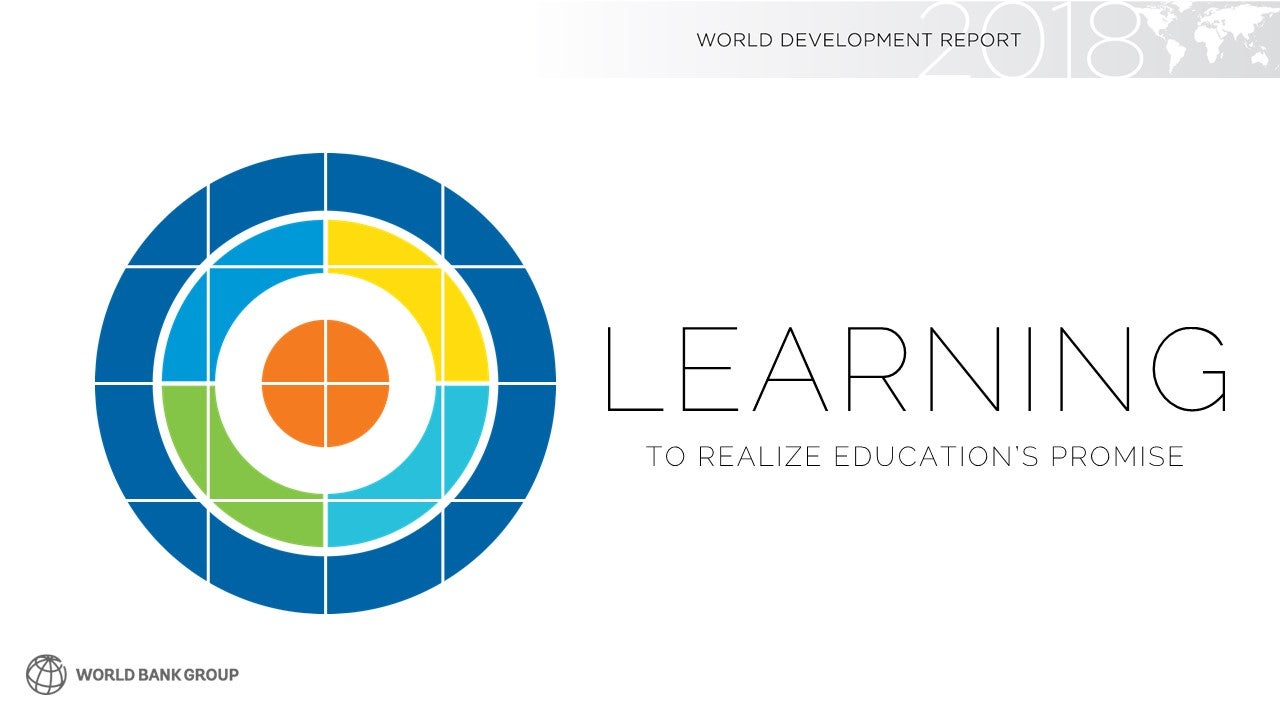 For one of us (Halsey), the initial impetus to focus on education policy came from his first (pre-graduate school) job living and working in the Korea in the late 1980s.  Despite decades of rapid economic development, Korea was still a middle-income country, far poorer than its OECD trading partners.  And yet what was striking was that—compared to many people in other countries like Mexico, where Halsey had lived and studied previously—so much of Korea’s population already benefited from high-quality education in primary and secondary school.  Rather than focusing only on enrolment, the Korean education system clearly had learning as its focus, with a determination to equip all children with the skills they and their society would need in the future.  And it paid off: while Korea’s economic takeoff in the 1960s may have been attributable to broader economic and governance reforms, what sustained the economic miracle decades later was its well-educated, highly skilled population.

For the other one of us (Deon), education has always been a passion—but a formative experience in the mid-2000s brought things into sharp focus.  Accompanied by a team designing a survey to collect data on the quality of schools in Papua New Guinea, he was talking to parents in the Highlands about their views on education.  One mother became visibly angry.  She was upset that she had done her part and gone to school, but it had not brought her the promised benefits.  Her sense of betrayal was palpable.   While her children were enrolled in the local school, it was clear that she was not enthusiastic about it—she seemed to have given up hope.  This came as a shock to Deon.  Many other people he had met, even many living in difficult circumstances, shared his belief in the power of education.  And academic analysis had demonstrated the potential high returns to schooling and the role that human capital plays in economic development.  But the disconnect between education’s promise and that mother’s reality was a wake-up call.  While other factors conspired to diluting the payoff to schooling in Papua New Guinea, the low quality of education was a fundamental part of the story.

A key theme of the WDR is that schooling is not the same as learning. In Kenya, Tanzania, and Uganda, when grade 3 students were asked recently to read a sentence such as “The name of the dog is Puppy” in English or Kiswahili, three-quarters did not understand what it said. In rural India, nearly three-quarters of students in grade 3 could not solve a two-digit subtraction such as 46 – 17, and half still could not do so by grade 5. Although the skills of Brazilian 15-year-olds have improved, at their current rate of improvement they will not reach the OECD average score in math for 75 years. In reading, it will take over 260 years. And these are all countries that have measured learning and made the results public; in too many other countries the problem remains hidden.

Schooling that doesn’t result in learning is not just a missed opportunity—it is a great injustice. The children whom society is failing most are the ones in greatest need of a good education to succeed in life.  Within countries, learning outcomes are almost always much worse for the disadvantaged. In Uruguay, poor children in grade 6 are assessed as “not competent” in math at 5 times the rate of wealthy children. Together with the fact that all these data are for children and youth lucky enough to be in school, these severe shortfalls constitute a learning crisis.

But there’s nothing inevitable about low levels of learning—real progress is possible, at any level of development, when countries prioritize learning and mobilize everyone with a stake in education to work toward it.  The case of Korea is striking, but there are others. Vietnam surprised the world when the 2012 results from PISA showed that its 15-year-olds performed at the same level as those in Germany—even though Vietnam was a lower-middle-income country. Between 2009 and 2015, Peru achieved some of the fastest growth in overall learning outcomes due to concerted policy action. And recently in Liberia, Papua New Guinea, and Tonga, early grade reading improved substantially within a very short time, thanks to focused evidence-based efforts.

The WDR identifies three main dimensions of the learning crisis. First, the poor learning outcomes themselves: low levels of learning, high inequalities (across income, gender, and other characteristics), and slow improvements in learning.  Second, the immediate causes of the crisis, seen in the various ways that the teaching-learning relationship breaks down—such as when students are hobbled by a lack of early nutrition, teachers are unprepared or unmotivated, materials and technology don’t improve learning, and school management is poor.  Third, the deeper system-level barriers, both technical and political, that pull the various actors away from a focus on learning.
The WDR provides detailed diagnoses of each dimension based on new data and research.

To confront the learning crisis, the WDR argues that a nation must take action on three fronts.

The payoff is education that delivers: for individuals, it promotes employment, earnings, health, and poverty reduction; and for societies, it drives long-term economic growth, spurs innovation, strengthens institutions, and fosters social cohesion. But these benefits depend largely on learning. Mounting evidence shows that the skills acquired are what equips individuals for work and life, and that it is through learning and skills that education boosts growth. Countries have already made a start by getting so many young people into school; now it is time to realize education’s promise by accelerating learning for all.