Fear of openly confronting politics can come in the way of achieving economic development goals. To help address this problem, the Development Research Group of the World Bank prepared a report synthesizing the vanguard of economics research on the functioning of political markets to understand the implications. It yields insights for strengthening existing transparency and citizen engagement policies with potentially powerful consequences for economic development everywhere, in poor and rich countries alike.

First, the report defines how politics is key to economic development. Politics matters fundamentally for whether the leaders who wield power in government have incentives to pursue economic policies on the basis of the best available technical evidence, or to ignore technical advice and pursue policies that they know are worse for economic outcomes than available alternatives.

One example is the persistence of corruption when powerful leaders deliberately weaken institutions of accountability. Detailed records of bribe payments maintained by one such leader show how judges, parliamentarians and media outlets were routinely paid to do the bidding of the regime.

Another type of political problem is perhaps even more pernicious—and that is when citizens’ prejudices, biases, myopia, and lack of capacity to understand technical evidence prevent well-intentioned leaders from doing what is supported by the evidence. Another instance is when leaders gain power by polarizing citizens, and exploiting divisions among them, rather than seeking common ground to solve problems of public goods.

The basis of leader selection—what types of issues are considered by those who have the power to select and sanction leaders—matters beyond the type of political institutions through which that power is exercised. More democratic institutions, where the power to select and sanction leaders is widespread among individual voters, can yield on the one hand, populist demagogues, who pander to citizens’ beliefs and, on the other hand, leaders who sit down with each other to understand complex problems through expert analysis, and find solutions by forging agreements between diverse groups. More autocratic institutions can also yield effective statesmen, or disastrous dictators depending on whether badly performing leaders can be removed by the organized elite citizens who wield power over leader selection under those institutions.

Third, the report demonstrates how the particular thread of selection and sanctioning of leaders can be weaved into new policy applications in a global context of increasing transparency and growing citizen engagement. The following figure we uncovered by plotting countries according to their Polity IV score on the extent to which they are “democratic”, shows that the overall distribution of institutions across countries has steadily shifted toward those that allow space for greater citizen engagement in selecting and sanctioning the leaders who wield power in government. Although some individual countries have experienced reversals to more autocratic institutions or seen little change, overall the trend has been toward greater opportunities for political engagement. 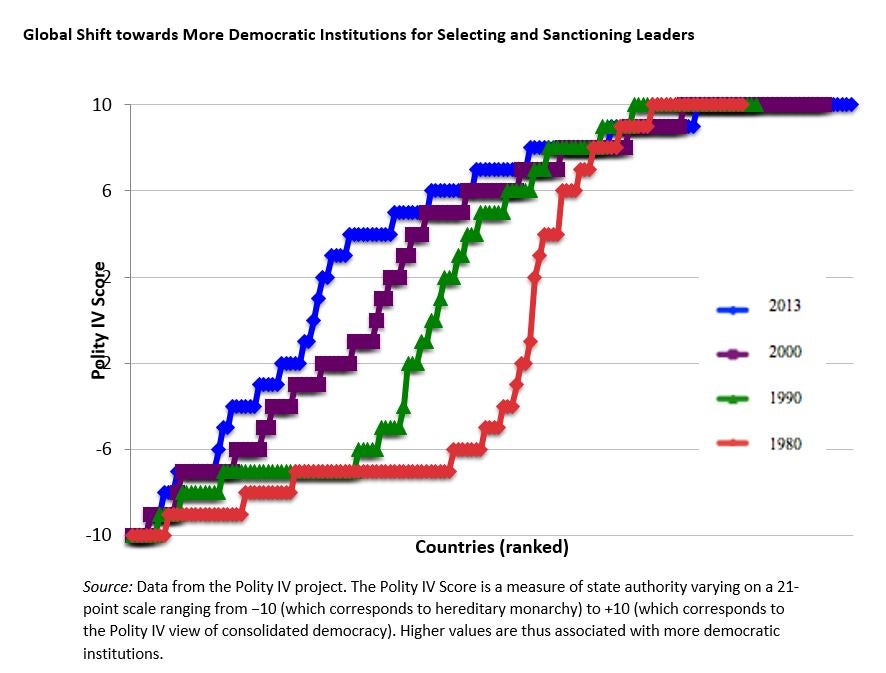 The spread of elections at local levels, even within countries with authoritarian national political institutions, has created unprecedented opportunities for citizens to influence the selection and incentives of leaders. Citizens are engaging in the political process not only as individual voters, but also as contenders for political office. Even in countries where the national political system is closed to competition, there exists a local level that is open to the entry of new leaders or political entrepreneurs.

At the same time, transparency is also spreading. Public disclosure policies are bringing out greater information about the functioning of government and the actions of those in power. Greater information is available not only due to disclosure by governments, but also by non-government agents, such as investigative journalists and civil society groups. New information and communication technologies have been described as a “dictator’s dilemma”.

The report shows how these forces can be harnessed for economic development by targeting transparency to enable citizens to select and sanction leaders on the basis of performance in delivering public goods. Here’s what’s new and different for what policy actors, including the World Bank, might consider doing:

Targeting transparency to nourish political engagement at the local level is especially important when the national-level is hopelessly mired. Shifting media attention from the national stage to the local one where local leaders can emerge, holds potential to make political markets function better at all levels.

These lessons are about the role of leaders in enabling citizens who hold polarizing beliefs to find common ground to tackle the massive public goods problems of our times. And about higher-order transparency--civic education, starting in schools, about citizenship, leaders and the role of the state—to build a common understanding of what to demand from the public sector. These lessons also suggest a broad shift in approach in international development assistance from one where external technical experts believe they have all the policy answers, with the main objective being to transfer knowledge and ideas to the leaders of the developing world. The alternative is to reduce some of this hubris, and recognize that the search for the “right” policies is a continuous one, by trial and error; and involves everybody, not just a select global elite.  And yet, the global elite can leverage their comparative advantage in generating technical data and analysis to help citizens and leaders to be better equipped and more inclined to pursue the solutions to public good problems.
Topics
Governance
Regions
The World Region