Reform leaders who are persuaded by the need to invest in human capital face the challenge of getting thousands of state personnel, who staff myriad government agencies, to deliver. The quintessential “delivery unit” in Africa, a region flagged by the Human Capital Index as having the greatest need for health and education investments, consists of local governments helmed by appointed bureaucrats and locally elected politicians. In new research in Uganda, we find that the quality of local politicians, elected at humble levels in a village or district, is a robust and substantial predictor of delivery of national health programs. These results suggest that for the Human Capital Project to have impact it may need to move beyond creating political space for national leaders to allocate more public resources to health and education and take-on the challenge of local politics as key to service delivery at the last mile.

The Ministry of Health in Uganda makes publicly available administrative data on the implementation of nationally mandated public health programs by district governments. We linked these measures of policy implementation to original survey-based data we gathered from 1,357 district bureaucrats and 770 district politicians across 75 districts in Uganda. The surveys were designed to measure the integrity and altruism of locally elected politicians and appointed bureaucrats to build on economic theory of bureaucracies as complex organizations in which non-pecuniary motivation matters for productivity. These data reveal that the integrity of local politicians is a significant factor. A 1 standard deviation higher average integrity among local politicians is associated with a 0.2 to 0.4 standard deviation higher measure of performance in health service delivery. In terms of concrete indicators of health coverage, an increase of 1 standard deviation in the average integrity of politicians is correlated with a 4.4 percentage point increase in child delivery at government facilities (9% increase at the mean); a 3.8 percentage point increase in share of pregnant women preventively treated for malaria (6.7% at the mean) and a 2.8 percentage point increase in pregnant women having at least four antenatal care visits (8.2% at mean).

Further, we provide qualitative evidence, and support from other studies in Uganda of the role of local councilors in monitoring local health facilities, and how they can play these roles in obstructionist, rent-seeking ways (such as shielding absent health workers from disciplinary action, or pilfering funds at the health clinic) versus facilitating better delivery (such as encouraging health workers to show up, and monitoring that clinic funds are appropriately used). We suggest that the measure of integrity is capturing the proclivity of local politicians to exert effort in one type of action compared to another–whether in the extraction of private rents versus the promotion of broader public service delivery. Higher integrity politicians are more motivated to pursue the public good and therefore more effective in improving public health service delivery.

One concern about our results is that omitted variables that explain both integrity and the ability of politicians to influence service delivery could be biasing the coefficient on integrity that we estimate. For example, unobserved citizens’ political preferences or prevailing social norms may be the underlying driver of variation both in politicians’ quality and service delivery, with no direct link between the two. We address this concern and provide additional evidence in support of the proximate channel of influence of political integrity on service delivery through the effort exerted by politicians. We show that the correlation with political integrity holds even after accounting for plausible sources of variation in voter demands (such as, partisan attachment to national leaders, and the presence of local radio), thus supporting the qualitative evidence and institutional context of politicians having a direct channel of influence on service delivery.

Random assignment of higher integrity politicians to districts may yield different estimates of impact on service delivery. However, random assignment of integrity may not be the useful or appropriate way to think about the problem. The policy-relevant question is whether there is evidence to support the existing theories of productivity of bureaucratic organizations. We provide evidence consistent with the idea that the selection of good leaders in local politics may be key to addressing the implementation challenge faced by national reform leaders. 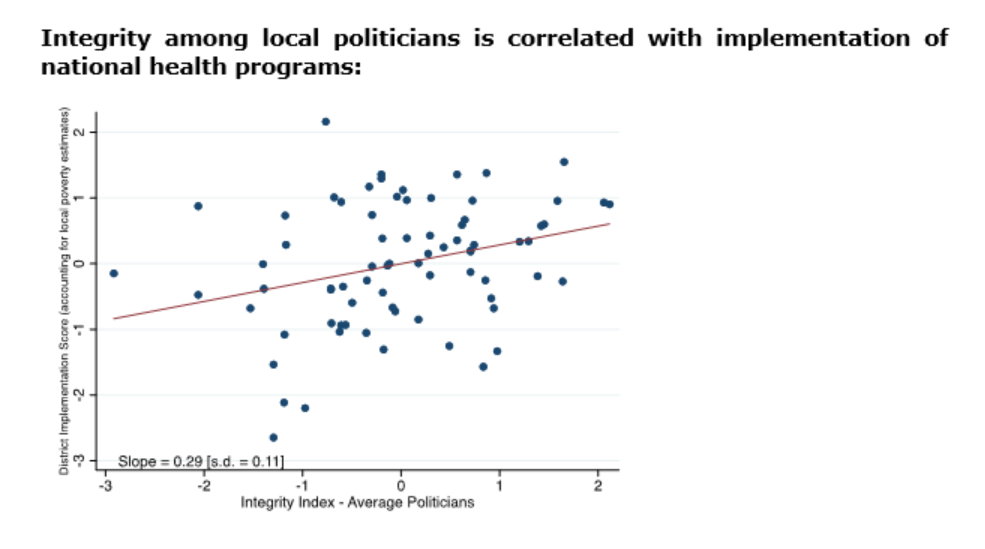 Political integrity appears to be in short supply: politicians score significantly lower than bureaucrats, and those who win elections tend to score less than contenders who lost. Whether for ill or good when it comes to economic outcomes, the fact of the matter is that politics is flourishing in poor countries, with widespread participation of citizens as voters and as contenders for political leadership at local levels. The evidence we gather shows that local politicians can exert significant influence over the functioning of bureaucracies at the frontlines. Efforts to build capacity of the local state to deliver and help national leaders become a part of the Human Capital Project, would do well to take seriously the role of local politics. 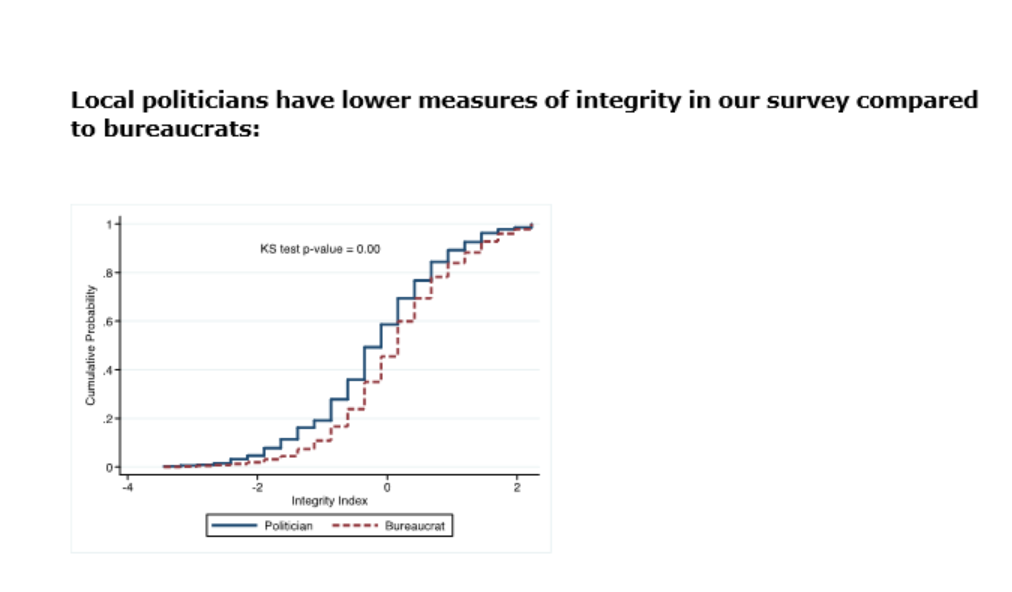 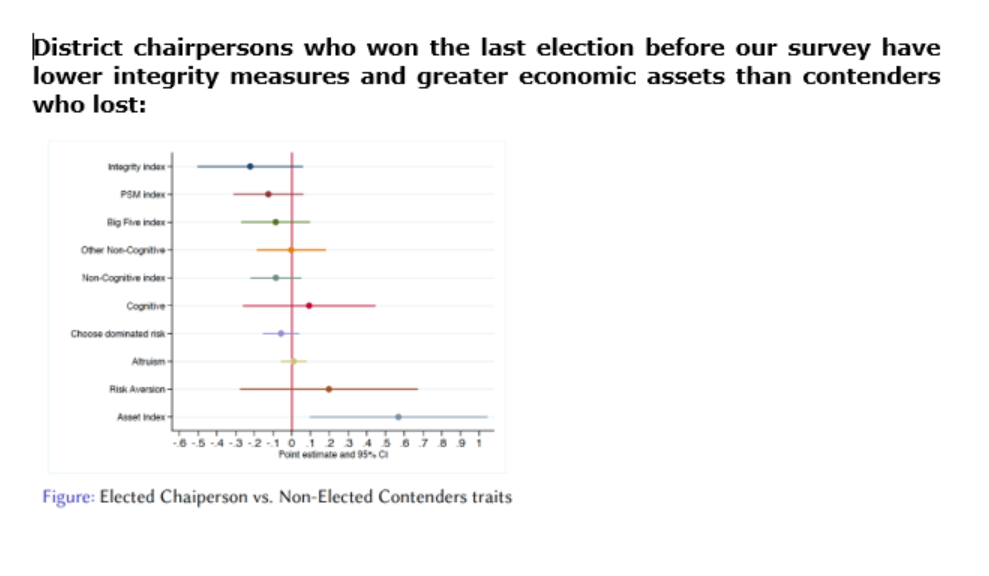