As President Kim pointed out earlier this month at the plenary of the World Bank/IMF Annual Meetings, 2.5 billion adults worldwide aren’t using the formal financial system. He used the statistic to illustrate the Bank’s new commitment to harnessing knowledge and becoming a bolder institution, a pledge he quickly followed through on by launching a new initiative to provide universal financial access to all working-age adults by 2020.

We’re thrilled to see high-level citations of Global Findex data, particularly in the context of spurring greater action to increase financial access for the world’s poor. We certainly believe that the 2011 Findex data have been a valuable tool for benchmarking, diagnostics, and cross-sectional analyses related to financial inclusion. But the best is yet to come. 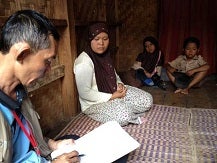 We’ve spent much of this year laying the groundwork for the 2014 Findex database, which will add a time-series dimension to the Findex data, giving policy makers, practitioners, and researchers a powerful tool to measure financial inclusion over time, assess the impact of policies and private sector initiatives, and develop a better understanding of the links between financial inclusion and other development outcomes.

Yet the 2014 Findex will be more than just an update of the 2011 data. Earlier this year, the research department’s Finance and Private Sector team received additional funding from the Bill and Melinda Gates Foundation to expand the Findex project to include an extended module on payments, effectively doubling the size of the questionnaire. Drawing on earlier payment and money transfer questionnaires in Africa and Asia as our spring board, we’ll use the additional survey space to take a deep dive into how adults across the world make and receive domestic remittances, bill payments, wage payments, government-to-person payments and mobile payments. The result – the 2014 Findex– will be a global, individual-level, time-series database on financial inclusion with a strong focus on payments.

In preparation for the survey rollout in January, we’ve spent the last several months conducting in-depth tests in nine countries to improve the quality and develop, pilot, and refine the 2014 Findex questionnaire. We mostly focused on the new payments module, but we also revisited some of the 2011 questions with an eye towards collecting the highest-quality, most relevant data possible. Along with regional directors from Gallup and World Bank payments experts, we visited Ghana, Kenya, Tanzania, Sri Lanka, Philippines, Indonesia, Peru, Paraguay, and the Dominican Republic. (Our Gallup partners conducted additional pilots in several Europe Central Asia, Middle East and North Africa, and OECD countries.)

We spent three to four days in each country conducting a range of qualitative exercises, including focus groups, in-depth interviews, and pilot surveys. These exercises allowed us to listen-in on free-flowing conversations about the financial lives of a given country’s residents from the foremost experts on this topic — the people themselves. We heard anecdotes, conversations, and opinions that are hard to come by in Washington, and we did our best to incorporate the wording and phrases used by participants into the questionnaire.

We learned time and again that we needed to reduce the complexity of the questionnaire. We were reminded that all survey researchers are constrained by the respondent’s comprehension of the topics being investigated. In many cases (mobile money, payment cards, wage accounts), we encountered confusion about the back-end functions of commonly used financial tools. In many cases, respondents simply don’t know if their mobile money wallet is connected to a bank account, or how exactly their remittances are transferred once they bring them to an agent. For example, we asked respondents what transaction they were thinking about when they responded that they made a “mobile payment.” We heard about the use of M-Pesa and GCash—but people also told us that they only send air-time credit. We learned about the importance of over-the-counter mobile payments, for instance, paying a mobile agent to send a text to your family living in a village with a pin number that they can use to pick up the cash at a local mobile agent. We realized that we could not draw a comprehensive typology of all mobile payments, but could collect precise information on the use of specific types of transactions, which will allow us to track changes in mode of payments over future rounds of the survey.

We also seized the opportunity to ask people to explain some unexpected findings in our 2011 data set. For instance, we were puzzled that many adults, e.g. almost 15 percent of adults in Africa, reported using both formal and informal modes of savings. And heard, for example, from a woman in Ghana, who paid an informal sou-sou collector one-day’s savings to collect $1-2 dollars a day from her home and return the money at the end of the month — at which point her savings was sufficient to avoid deposit charges at her bank. We spoke to a man in the Kenya, who told us that cash “burned his pockets” and also juggled a combination of informal and formal savings mechanisms in order to ensure that money was available to meet his future financial commitments. And we met a woman who worked as a maid in the Philippines, who said she used informal modes of saving, effectively as a commitment savings device, between bi-monthly mobile payments to her family in a different part of the country. What did this teach us? That as highlighted in “Portfolios of the Poor”, the poor make sophisticated financial decisions every day to smooth consumption and insure themselves against risk.

We’re now in the final stages of questionnaire development, with surveys to begin in January. Stay tuned for updates and an exciting new Findex database! Findex database is a great source of assessing the daunting challenges and the enormous opportunities for innovation in the space of financial inclusion.
With the 2014 edition on the anvil, the time series would help discern what is working and what is not.

Great work! and appreciate for this work.
Thank You for sharing this information with all of us.
Robins
iConnect LC

Findex is a great database.Further rounds should expand questions on what financial access has been used for. For example, the question on whether a household has initiated a loan from a formal financial institution in the past 12 months should go further to ask whether the money was used for consumption or micro enterprise development.This will facilitate the task to access the impact of financial inclusion and the channel through which financial inclusion can improve welfare.
Tita