Does the ownership structure of electricity distribution utilities matter? Distribution utilities are usually private or government-owned. There is constant debate as to which is “better” in terms of financial performance, service delivery and quality, or development in general, given that public services, such as education and healthcare as well as the private sector depend heavily on reliable electricity distribution.

Despite the importance of the electricity sector for the economy at large, there is no consensus on the optimal utility ownership type given evidence for both sides. Some studies find that private electricity distribution companies perform substantially better in terms of profitability. Others conclude that privatization often does not give rise to efficiency gains.

Analysis of the Getting Electricity indicator of Doing Business (which measures the time, procedures and cost to connect to the grid, as well as service reliability and electricity tariffs) shows that there is no significant difference across utility ownership types with regards to the efficiency and quality of services provided to commercial end-users. Five interesting findings of the analysis are presented below.

1. Most distribution utilities are publicly owned but privatization is more likely in higher income economies
Of the 201 business cities covered by Doing Business, 71% have electricity distribution utilities that are majority-owned by the public sector, while the remaining 29% privately-owned distribution utilities are concentrated almost entirely in middle and high-income economies. This is in line with findings of studies showing that privatization typically takes place in wealthier societies, where efficient stock markets enable firms to issue public debt. At the regional level, private utilities are rare in Sub-Saharan Africa, East Asia and Pacific and Middle East and North Africa. In contrast, Europe and Central Asia and the OECD high-income group have a more balanced share of private and public distribution companies (Figure 1). 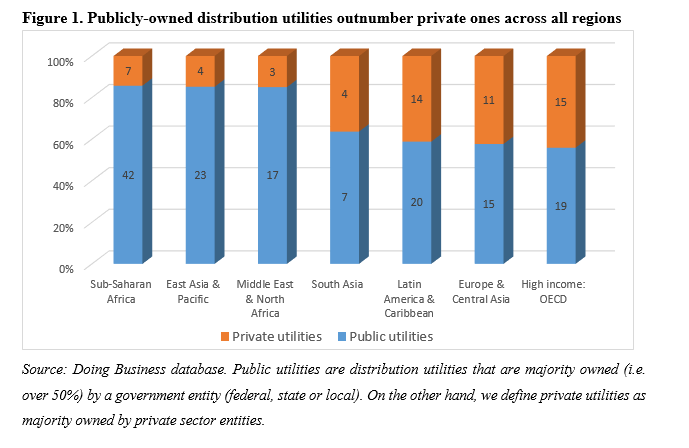 2. Obtaining electricity connections is equally burdensome from public or private utilities
The complexity of the grid connection process varies across different regions but shows only slight variation across publicly and privately-owned distribution utilities. The only exception we found is among lower middle-income economies where privately-owned companies, on average, connect clients to the grid at a faster rate and lower cost compared to publicly owned distribution utilities (Figure 2). For example, in Guatemala City, the private utility Empresa Electrica de Guatemala, connects new clients to the grid in 44 days. Meanwhile, the public utility in Accra, Electricity Company of Ghana, takes 78 days. Although there is no research analyzing the causes of these delays, the World Bank’s Enterprise Surveys data show that firms in lower income economies report a much higher incidence of bribe giving to get an electricity connection from a publicly owned utility than from a privately owned one. 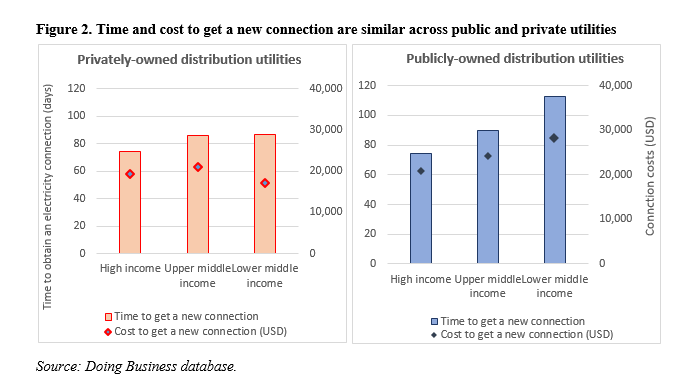 3. It is getting easier to get electricity connections regardless of utility type
Electricity distribution utilities are becoming more efficient across all income groups and regions. Doing Business data shows that since 2010, 47 percent of private utilities have implemented one or more reforms, compared to 39 percent of public utilities. The latter group, however, has implemented more sizeable reforms. For instance, the Dubai Electricity and Water Authority, which is a public utility, has implemented five reforms that reduced the time to get a new electricity connection from 55 days in 2010 to 10 days in 2018. In practice, this means that while major efficiency gains to connect to the grid have been virtually the same for public or private distribution companies, since 2010, the global time to get a new connection was reduced by 20% and 22% for private and public distribution utilities, respectively.

4. Utility ownership has little correlation with power outages
When we factor in income per capita, natural resource endowment and geography, we observe that power outages – measured both in terms of duration per customer (SAIDI index) and frequency (SAIFI index) – are not significantly associated with the ownership status of the distribution utility. This is perhaps not surprising as power outages largely depend on a country’s production capacity, over which distribution utilities have little control. Interestingly, the existence of an electricity sector regulator – either at the state or federal level – is significantly associated with lower outages, suggesting that when there is an independent body monitoring utility performance on reliability, power outages are less likely to occur. In San Salvador, for instance, SIGET, which is an independent regulatory agency, approved Norm 320-E-2011 to (i) set an outage cap objective for the utility and (ii) to monetarily compensate clients in case of outages.

5. Commercial end-user tariffs are identical across utility types
Commercial tariffs are, on average, 8 percent lower in cities where the distribution utility is public. This trend holds true across regions and income groups. While many variables determine tariffs (e.g. market size or production costs), country natural resource endowment is often cited as a major driver. Using a measure of fuel exports as a percentage of total merchandise exports as a proxy for natural resource endowment, we observe that most utilities in oil and gas rich economies are publicly owned. Moreover, these economies historically subsidize end-user tariffs despite low production costs (Figure 3). In Kuwait, for example, commercial tariffs are set at less than one cent per kWh. Such extremely low values bring the global average down for electricity tariffs among publicly owned utilities. After removing such economies from the sample – i.e. where fuel exports are over 20 percent of merchandise exports – we find that commercial tariffs are almost identical regardless of utility ownership type. 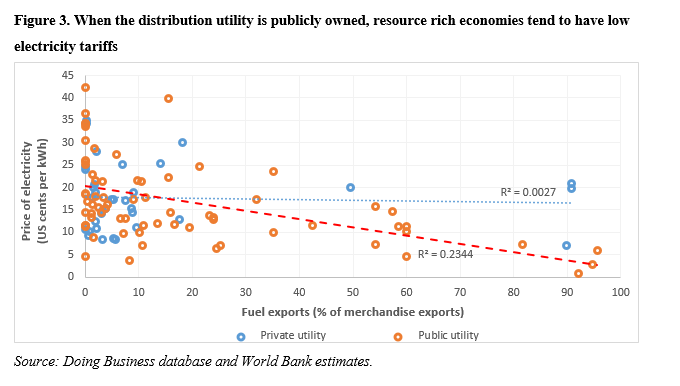 Going beyond the “public” vs “private” debate
Overall, we find no major differences between the efficiency and quality of services which commercial end-users receive from private or public utility companies. This is also reflected by the fact that the top 10 economies in the Getting Electricity indicator of Doing Business have both majority public (e.g. Korea Electric Power Corp and Dubai Electricity and Water Authority) and majority private distribution companies (e.g. CLP Power Hong Kong Ltd and UK Power Networks) represented.

Looking ahead, more nuance is needed when examining outcomes across utility ownership types. After all, many utilities have a mixed ownership structure between the public and the private sector. Studies have also found that public-private partnerships – as opposed to entirely private (or public) ownership – may be more conducive to utility performance, an area that deserves further research.
Topics
Energy
Series
Doing Business Those who are unmotivated are always determined, those who are willing to stand up, and those who bite a goal are the most likely to succeed

Dear panel,
is there any new findings on this topic or recent research outcomes?
many thanks in advance
best
Abo Rassa