For refugees, the average duration of exile is going down. Why is this bad news?

This page in: Français |  العربية

Two years ago, we published a blog estimating the global average of the duration of exile for refugees, based on data from the UN Refugee Agency (UNHCR). Our methodology is described in a peer-reviewed working paper.

We essentially found that the average duration of exile had been highly variable since the end of the Cold War and that as of the end of 2015, it stood at about 10 years, with the median at 4 years. We also found that for refugees who live in protracted situations of more than 5 years, the average duration of exile stood at 17 years, with the median at 11 years.

How have these numbers changed since then? We used end-2017 data published by UNHCR to update our calculations – and came up with several key findings.

1. The average duration of exile continues to go down

The graph below shows the distribution when we break down the total number of refugees by duration of exile. For example, about 3.2 million refugees have been in exile between 0 and 1 year, about 2 million between 1 and 2 years, about 2.3 million between 2 and 3 years, etc. 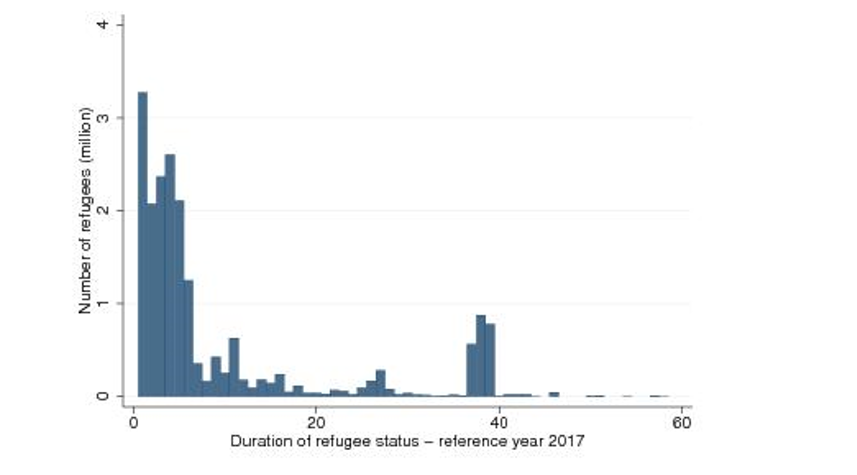 One of the interesting aspects of this graph is the “bump” in the period between 37 and 40 years. These are mainly the roughly 3 million Afghans who fled their country when the Soviet Union invaded in 1979. Such a large number of people, in exile for such a long time, clearly has an impact on the global average of the duration of exile, pushing it up. As long as their situation is not resolved and they extend their stay in host countries, they automatically increase the global average by each passing year.

In fact, if all refugees stay where they are, the average duration of exile will increase by one year every year. The only way it can go down is if large numbers of people who have been in exile for a long period of time find a solution – which is not happening – OR if large numbers of new refugees come in. These newcomers will have been refugees for a very short period of time, pushing the average down. The graph shows beyond any doubt that this is what happened over the last few years.

In other words, the reason why the average duration of exile is going down is because there are many new refugees: it reflects an aggravation of the crisis.
3. The real news is the dramatic increase in the number of refugees
The number of refugees has skyrocketed over the last few years: at 19.5 million, it is now far above the earlier “peak” reached in the early 1990s. Since 2015, we have seen large numbers of people fleeing conflict, instability, or oppression, especially the South Sudanese and Myanmar’s Rohingya, but also people from Syria, Afghanistan, Somalia, Democratic Republic of Congo, Sudan, Iraq, Eritrea, Central African Republic... This dramatic increase is the cause of the decline in the average duration of exile. 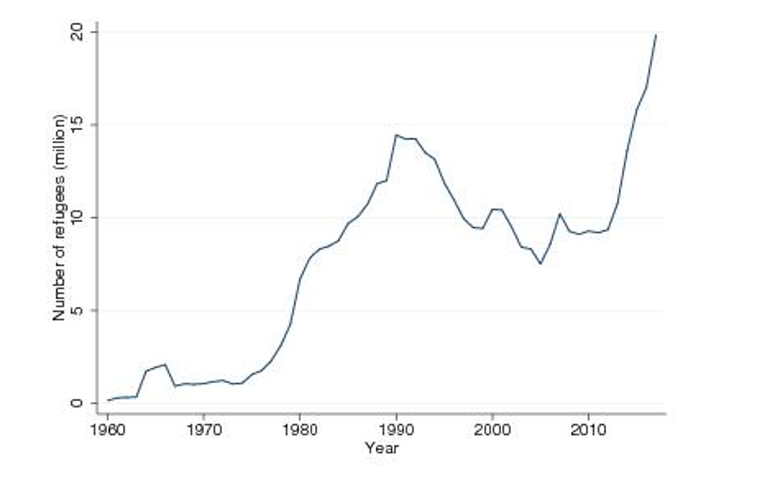 4. The number of refugees in protracted situations is also increasing rapidly

The number of refugees who have been in exile for more than 5 years is now close to 10 million, the highest since the end of the Cold War. It is also growing rapidly as early and numerous cohorts of Syrian refugees gradually reach the 5-year mark. Once again, large numbers of “new protracted refugees” automatically translate into a decrease of the mean and median duration of exile for this category, respectively to 17 and 10 years. 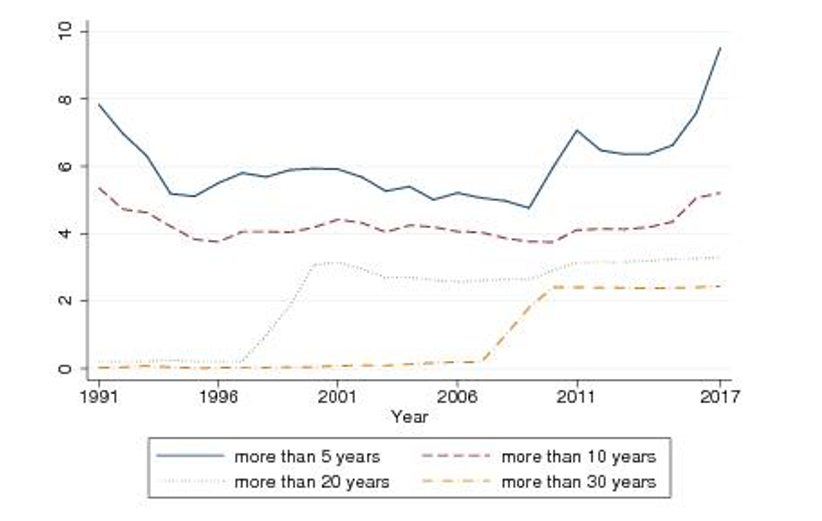 5. What does this mean?
The numbers we reviewed point to several implications.

First, with the total number of refugees at a record high and still rapidly growing, more aid is needed – to refugees and host communities. To ensure the sustainability of the overall international system for refugee protection in the face of such a crisis, renewed efforts are also needed to ensure a better sharing of the burden and responsibilities across countries.

Second, with the number of protracted refugees also growing, the response needs to shift from a humanitarian focus to one that also takes into account medium-term socio-economic impacts through development actions.

Third, as it becomes clear that a number of people who are seeking refuge today are likely to stay in exile for a long period of time, we need to focus on a response that is designed from the onset in such a manner that it can be sustained over time. In other words, development thinking needs to be present even in the emergency phase.

And fourth, our findings point to the importance of data and sound analysis. Solid data is key to the design of an adequate response. But analysis is also crucial as some findings can be counter-intuitive. For example, a shorter global average of the duration of exile for refugees is in fact… bad news.
Topics
Fragility Conflict and Violence
Urban Development
Regions
The World Region Advisor, Fragility, Conflict and Violence Group at the World Bank I would like to see the gender disparities in these reports.