On risk and black swans in developing countries

In 2014, the World Bank issued a highly relevant and timely report titled Risk and Opportunity:  Managing Risk for Development. This report analyzed the growing number of heterogenous risks and opportunities affecting developing countries.  A clear challenge in finding a consistent risk management strategy stems from the sharp differences in the risks faced by developing countries; for example, commodity price shocks, financial crises, and natural disasters have all different defining characteristics.  While we could tailor risk management strategies to each one of these types of risks, not having the benefit of a unifying framework can lead to mistakes and mismanagement of the scarce resources available to developing nations to deal with these potentially disastrous events.  Five years after the publication of the report, in a time of growing macroeconomic headwinds for emerging markets and higher exposure to natural disasters, understanding the risks faced by these economies and how to effectively manage them continues to be a key policy challenge.

Building upon this important stepping stone, the core of our report From Known Unknowns to Black Swans: How to Manage Risk in Latin America and the Caribbean focuses on setting up a simple but powerful common framework for the risks faced by developing countries.  In our framework, the key characteristic linking heterogenous risks with effective preventive policies is the underlying stochastic distribution of the different risks. Our main message is that while insurance would be the preferred risk management tool, risks whose distributions are characterized by “fat tails” (i.e., relatively large probabilities of extreme events) are difficult and costly to insure, if at all.  In fact, the fatter the tails, the less insurance will countries be able to secure and/or afford.

As Figure 1 shows, our framework starts by distinguishing between risks with known distributions (known unknowns) from those where there is no prior information (unknown unknowns).  This dichotomy immediately allows us to reach an important public policy conclusion:  we cannot insure against all risks.  Large and unpredictable events, also known as “black swans,” provide no opportunity to create an insurance contract.  Hence, black swans can only be managed through the buildup of resilience (for example, improved infrastructure and better financial, economic, and political institutions) and access to ex-post assistance. 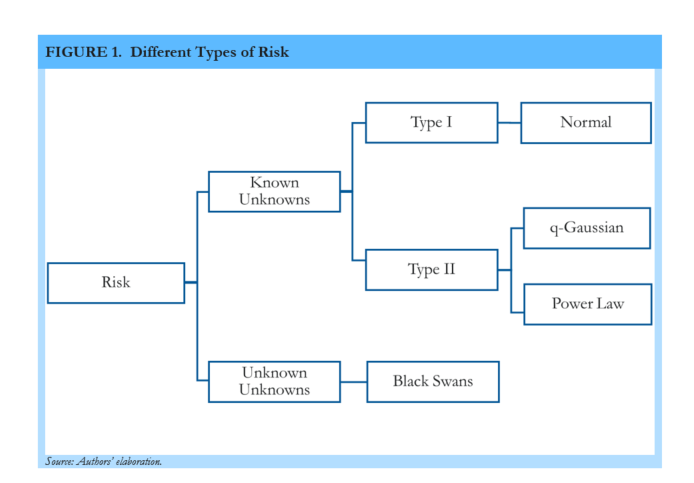 On the other hand, risks with known stochastic distributions will, for the most part, offer the opportunity to access at least some kind of partial insurance.  Among these types of risk, we distinguish between those with well-behaved bell curve distributions (Type I risks), and those with distributions characterized by fatter tails (Type II risks).

When it comes to Type I risks, the good news is that they should be fully insurable since their underlying normal distribution makes it highly improbable that any event will deviate substantially from the known mean.  The bad news is that there are very few economically relevant risks that follow normal distributions.  After some effort, we found the rain in Uruguay (see Figure 2.A) as a plausible example.  Since flood or drought years may represent a major problem for a country like Uruguay, heavily dependent on rainfall (both for agricultural and energy production), policymakers should be able to insure against these events through financial derivatives in international markets.  Indeed, with the help of the World Bank, Uruguay has purchased financial options based on the country’s rainfall. 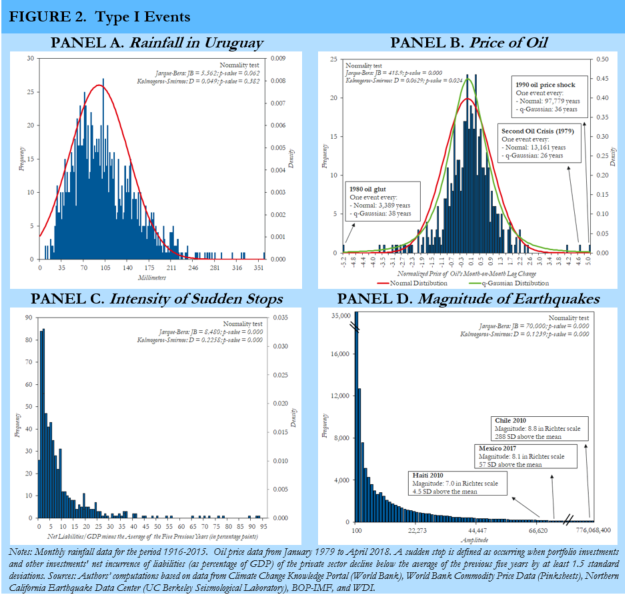 Most economically relevant risks, however, are Type II.  While these risks display an almost continuous degree of fat tails, we concentrate on two extreme cases for the sake of exposition. On the one hand, risks associated to changes in international asset prices and commodities tend to follow bell-shaped distributions.  Observing the distribution of the change in oil prices (Figure 2.B), one may think that these changes follow a normal distribution, which could be a costly mistake.  The key difference in the underlying distribution of oil prices and a normal distribution lies in the fat tails of the former.  In fact, assuming a normal distribution, oil traders in 1979 would have believed that an event of the size of the ensuing oil crisis was literally impossible.  If those traders had assumed a distribution with fatter tails such as a q-gaussian, they would have realized that, while rare, such an event was entirely inside the realm of possibilities and thus would have looked to protect themselves accordingly.

On the other hand, important financial risks affecting emerging markets such as sudden stops of capital inflows (Figure 2.C) or natural disasters such as earthquakes (Figure 2.D) follow distributions with very fat tails such as power law distributions.  These fat tails mean that an extreme event (which comes with a non-negligible probability) could, potentially, change the ex-ante moments of the distribution substantially.  Insuring against this type of uncertainty becomes much tougher.

While precautionary saving in the form of international reserves seem to be the only ex-ante solution to the problem of sudden stops (no insurance is available at this date), a quickly evolving insurance technology has started to provide solutions to natural disasters such as earthquakes in the form of catastrophe bonds (cat bonds).  Albeit partial, cat bonds provide a new form of insurance against these natural phenomena.  If the bond is triggered (i.e., an earthquake occurs), the principal obligation to investors is automatically cancelled and immediately used for relief efforts.  One of the most successful and larger issuances of a cat bond was recently sponsored by the World Bank and covered the four countries of the Pacific Alliance (Chile, Colombia, Mexico, and Peru).  The multi-country structure of the cat bond lowers the cost of insurance as the correlations among events between countries tend to be low.

To sum up, insurance should be an important part of the countries’ arsenal to manage their most significant risks.  The access and cost of insuring against any specific type of risk will be determined by its underlying stochastic nature.  As the tails of the distribution grow, it becomes more difficult and costly to obtain insurance and hence other instruments in the risk management toolbox become more important.  While new technologies such as multi-country cat bonds are allowing us to partially insure against fat tail events, as of today we cannot insure against all risks.  This will always be true in the case of black swans.  Building resilience and improving access to ex-post aid are the only preventive tools available for such unpredictable events.

This is the fourth in a series of blogs commemorating the fifth anniversary of the 2014 WDR on Risk and Opportunity. Read all the blogs here.