Emerging economies are routinely affected by monetary policy announcements in the US. This was starkly evident on May 22, 2013, when Federal Reserve Chairman Ben Bernanke first spoke of the possibility of the Fed tapering its security purchases. This “tapering talk” had a sharp negative impact on financial conditions in emerging markets in ensuing days—their exchange rates depreciated, bond spreads increased, and equity prices fell; so much so that some of the countries seemed on the verge of a full-fledged balance of payments crisis. The event helps explain why issues related to the spillover of US monetary policy have gained prominence in recent contributions to the literature and in policy discussions (Rajan, 2015).

In a recent paper, we analyze the spillover of US monetary policy announcements on twenty of the largest emerging countries. We find that US monetary policy surprises have a significant impact on emerging economies’ exchange rates, equity prices, and bond yields. The impact is larger for surprise tightening of policy than for surprise easing. The impact is disproportionately larger for large surprises, implying that emerging markets are relatively insulated from anticipated policy announcements. The spillover effects of policy announcements of other advanced economies, such as the Eurozone, Japan, and UK, is much weaker than those of the US.

Our empirical approach rests on identifying the surprises associated with the monetary policy announcements. Traditionally, the literature has used changes in federal funds rate futures in a very short period of time around policy announcements, often within minutes or hours, to identify monetary policy surprises. This approach works well for the period until 2008 when the Fed conducted conventional monetary policy by setting the target federal fund rate. During the period we consider, 2008-2016, the Federal Reserve Board conducted monetary policy primarily through direct asset purchases, altering the size and composition of its balance sheet (see Chart 1).

Since the federal funds rate futures do not provide a meaningful basis to identify policy surprises during the period of unconventional monetary policy, high frequency changes in longer term Treasury yields have been used to identify the surprises. The identifying assumption is that movements in Treasury yields in a narrow window around policy announcements are attributed to unanticipated changes in the policy stance or to forward guidance regarding the future path of monetary policy. Drawing from the literature we use changes in 2-year Treasury yields on announcement day as an indicator of the surprise change in the US monetary policy.  Using event study methodology, we analyze the impact of the Federal Open Market Committee (FOMC) announcements on emerging economies between October, 2008 to August, 2016 (during this period 65 FOMC meetings took place). We estimate panel regressions of asset price returns for all emerging economies over a one to three-day window around FOMC announcements.

Our main results are:

Chart 2: Impact of US Monetary Policy on Emerging Markets 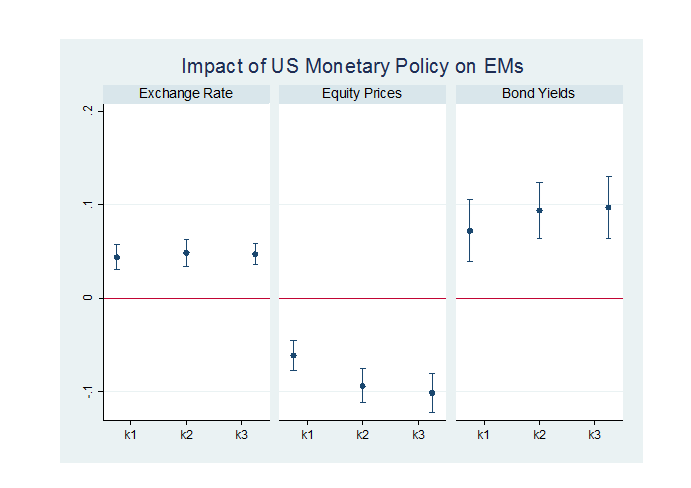 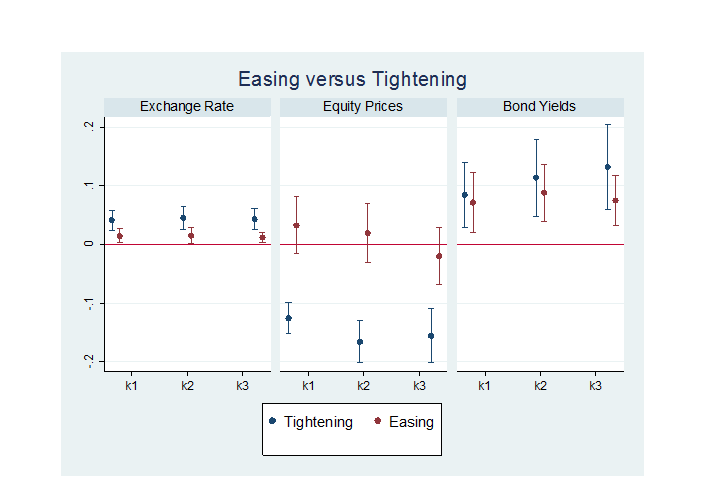 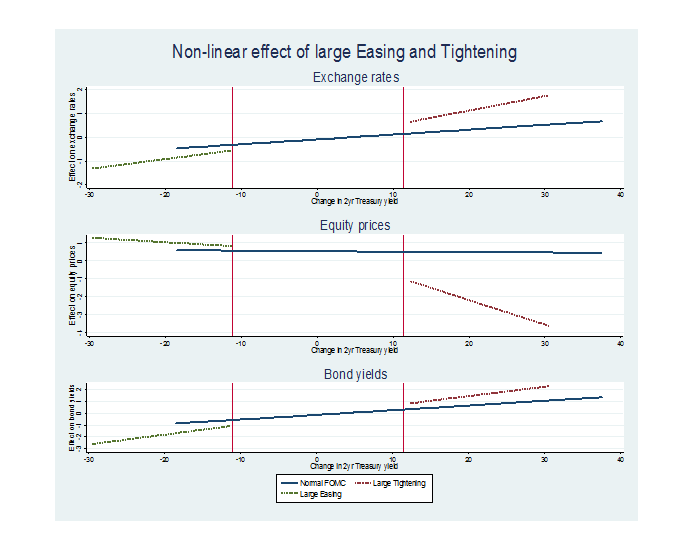 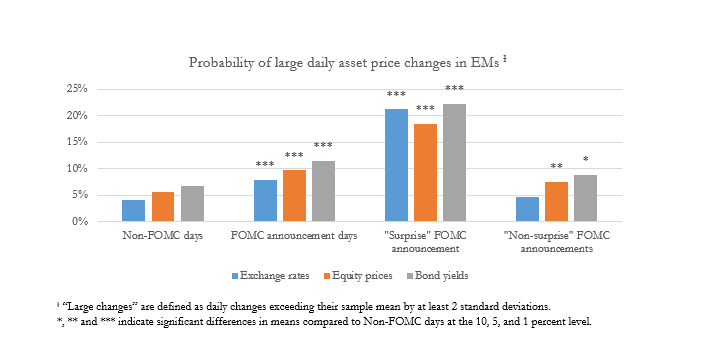