Reducing interactions among people is seen as critical to reducing propagation of the novel coronavirus (COVID-19). A variety of non-pharmaceutical interventions (NPIs), such as closure of non-essential businesses, stay at home orders, or school closings have been put in place to contain the virus , with apparent success in advanced countries, we find in our new working paper Determinants of Social Distancing and Economic Activity during COVID-19: A Global View.

While there is controversy around whether this should be the goal in developing countries as well, there is also concern about whether such measures even work. Government capabilities to enforce such measures may be weaker and resistance will be higher since the trade-off with livelihood is harsher.

At the other end of the cycle – where the debate is when to loosen NPIs, as it is in several advanced countries and some developing countries, the question is how robustly the public will respond to opening and, in turn, how quickly the economy will respond.

Underlying both issues is the question of how much demobilization is in fact due to NPIs. We argue here that globally, most result from voluntary decisions of individuals reacting to the virus incidence count. This suggests that much social distancing will happen regardless of NPIs. Further, viewed through this lens, restrictions may often function more like a coordinating device among increasingly predisposed individuals than repressive measures per se – if we’re all working from home, then I won’t be viewed badly if I do. Whether schools are online, or in-person, requires a decision that individual concerned parents cannot effect.  Some evidence from history supports such views. As Crosby (2003) notes, restrictive policies couldn’t be put into place  during the 1918 Influenza epidemic in San Francisco until the public was alarmed by the mortality rate and that , “Fear had been the enforcer of the Board of Health’s policies,” (p. 108) not the authorities themselves. Clearly, for those not inclined to demobilize, NPIs play their traditional role.

Using Google data on mobility derived from the Maps smart-phone application, explicitly provided as a measure of social distancing, against the log of the case incidence per capita, we looked at seven countries: Italy, Japan, Sweden, United Kingdom (UK), the United States (US) and two upper middle-income countries, Brazil and South Africa, for which we have reasonable smart phone coverage. In every case, the figures show strong evidence of decreased mobility with increase in case incidence. 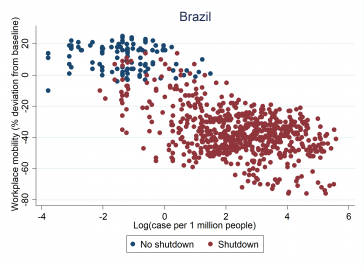 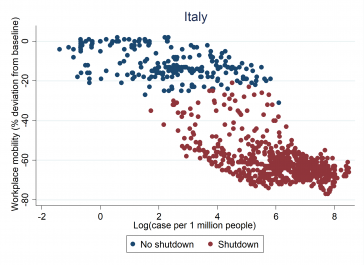 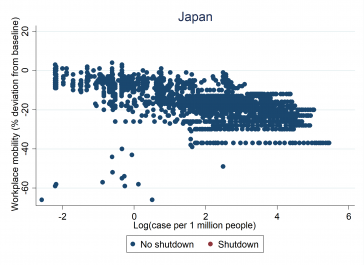 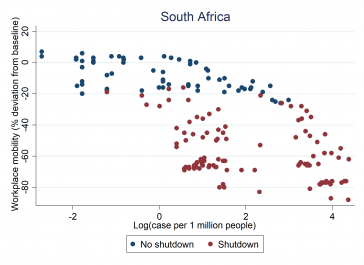 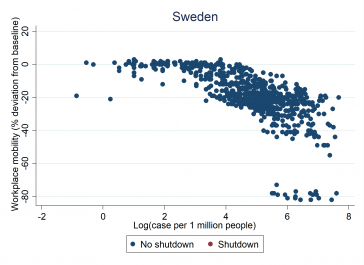 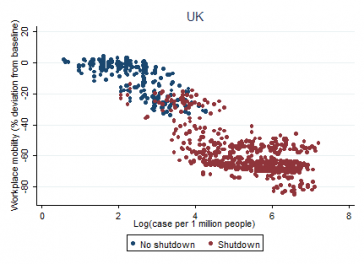 Our findings were confirmed in a global sample of countries divided into Low Income Countries (LIC), Lower Middle Income (LMIC), Upper Middle Income (UMIC) and High Income (HIC), where there are no NPIs. The effect of increased COVID incidence on mobility, voluntary demobilization, is both of larger magnitude than in the US and very similar across LMICs and HICs. However, that there is no effect in LICs is consistent with the argument that in very poor countries, people cannot afford not to work and hence they will continue to do so.

The impact of NPIs themselves is mixed and often large but remains less important than the voluntary component in all but LICs. Workplace closures, school closings, restrictions on internal mobility are all important most clearly in LMICs. The data suggest that governments in even moderately poor countries are able to deliberately effect a slowdown . In LICs, the only NPI that appears to have any effect is closing public transportation.The weaker self-demobilizing effect in LICs may also suggest that, more generally, the impact of enforcing NPIs bites disproportionately on poorer people.

Do these voluntary declines in Google mobility, in fact, map to economic activity? Preliminary evidence from the US and Sweden suggests they do. Take the case of restaurant reservations by state against COVID incidence in the US. The fall in reservations predated the closing of non-essential businesses and there is virtually no impact of business closing measures.  In the same vein, movie theater releases and revenues in Sweden, a country that imposed suggested non-essential business closings and banned 50+ meetings only at the end of March. Long before this, movie revenues (demand) dropped off entirely while releases (supply) continued more or less unchanged. The results again suggest that what slowed economic activity was not the NPIs, but rather increased self-enforced demobilization as evidence of the magnitude of the threat accumulated.

These findings offer both good and bad news.

If the populace is not convinced that, in fact, the viral coast is clear then continued uncertainty may dictate a longer recovery period.

Note: A version of this blog was first published on VOX.