Was the resource boom more akin to a resource curse for Africa?

The IMF’s Regional Economic Outlook (REO – April 2016) notes that the region’s dependence on primary commodities has increased since the 1980s with nearly half of the countries in the region subject to commodity price fluctuations. These economies, which contribute 70 percent of the GDP of Sub-Saharan Africa are facing a sharp slowdown in real growth, with many also having to undertake large fiscal retrenchments and/or seek balance of payments support from the IMF.

We review the economic performance of Sub-Saharan Africa’s (henceforth Africa) non-renewable resource producers since the early 2000s, the start of the commodity price boom contrasting this with the economic performance of Africa’s non-commodity exporters over the same period. The negative economic impact of the current slump in commodity prices is indisputable, but it is worth asking whether Africa’s non-renewable resource producers realized any tangible benefits from the commodity price boom. Our conclusion is that they did not, at least in terms of real per capita growth. And here’s why.

Per the REO, we categorise Africa’s economies into three groups; oil exporters, mineral exporters and non-commodity exporters. Our aim is to explore how well the first two groups of non-renewable commodity exporters have performed in relation to those economies which have not been blessed, or cursed, with non- renewable resources. As often fragility dominates other factors, we excluded those economies classified as such, from all groups. South Africa, a much more industrialised economy than any other in Africa, is also excluded.

For each group, we compute a weighted average for each variable of interest, with the weights for each economy determined by that economy’s weight in the combined GDP of its group at 2013 purchasing power parity prices. Nigeria dominates the oil exporters, with 77 percent of their combined GDP, but for each of the other two groups, no single country dominates.

We begin by looking at the evolution of the external terms of trade (ToT) of the three groups. We then compare economic performance in terms of growth of real GDP per capita, during the commodity price boom (the ten years from 2004 to 2014). We also look at forecast growth to 2018.

In contrast, the non-commodity exporters saw their ToT decline in the first half of the 2000s (this average masks large variations between individual countries), after which the ToT recovered in 2011. In sum, the non-renewable resource exporters enjoyed a much more propitious external trading environment during this period compared to those economies without non-renewable resources. 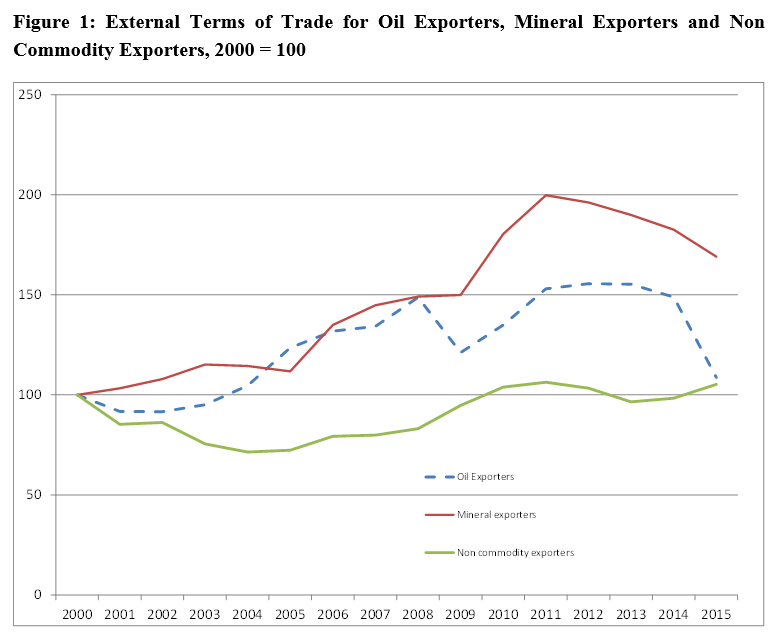 Source: Derived from the REO database

Growth of per capita GDP
In terms of actual real per capita growth, the non-renewable resource producers did no better during the boom than the economies which lack non-renewable resources, despite the vastly more favourable external ToT for the former compared to the latter (see table 2). With the end of the boom, the economies of the non-commodity exporters are projected to perform much better than both the oil and mineral exporters.

These data indicate that, since the early 2000s, African economies, which do not have the benefit of being endowed with natural resources, appear to perform better than their neighbours who do. The former can match the latter’s performance during commodity price booms and avoid the negative impact of growth which afflicts the latter during slumps, a finding which lends support to the notion of a “natural resource curse”.

Despite favorable terms of trade and a prolonged period of propitious commodity prices, the oil exporting countries on average performed no better than the non-commodity exporters in Africa. The slump in commodity prices over the last two years has brought about a sharp reduction in their growth rates, with the economy of the largest oil producer now in recession. The mineral exporters as a group appear somewhat less vulnerable to the commodity price downturn, in part because their economies are not as heavily dependent on net commodity exports and they benefit from more favorable import prices. Their economies appear to be better governed and more competitive.

The above evidence suggests that the resource boom over the decade since 2004 may have been more akin to a resource curse, in particular for the oil exporting countries of Sub-Saharan Africa. The poor performance of these economies on competitiveness indicators and governance scores attest to a weak foundation for the pursuit of structural reforms and diversification efforts. Yet these efforts are critical in order to launch these economies onto a higher more sustainable growth trajectory. The time for action is now.

I am thankful to Martin Brownbridge and Breda Griffith who provided valuable comments, suggestions and input to this note. However, the remaining errors and omissions are mine.