What drives the radicalization of foreign terrorist recruits?

The world has experienced a dramatic increase in the number of terrorist attacks since 2000 and especially since 2011. More than 100 countries were affected in 2016, with OECD countries suffering the highest number of casualties since the 9/11 attacks. The transnational nature of terrorism has become more salient with the emergence of multinational terror groups such as Al-Qaeda or, more recently, the Islamic State in Iraq and the Levant (ISIL, also known as ISIS or Daesh, its Arabic acronym). The United Nations estimates that more than 25,000 foreign fighters went to the Syrian Arab Republic and Iraq between the start of the Syrian civil war in 2011 and September 2016 to fight for either Daesh or the Al-Nusra Front.

Some of these fighters have engaged in extreme levels of violence in Syria and Iraq, others have perpetrated terrorist attacks in third countries, and those who ultimately return to their home country may constitute threats to domestic security. The unprecedented levels of international recruitment by terrorist organizations make efforts to curb radicalization at home all the more pressing. Yet the question of what drives radicalization into violent extremism is still being debated.

A new paper by Abdel Jelil, Bhatia, Brockmeyer, Do, and Joubert addresses this question using a data set that contains information on 3,965 foreign recruits of Daesh. The information includes the recruits’ age, education, country of residence, and self-reported knowledge of Islam. The data come from a leaked cache made available to journalists, who in turn shared the information with academics and policy research institutions.

Analysis of the data highlights interesting facts. First, Daesh has been able to attract recruits from all around the world (map 1). A total of 61 nationalities are represented in the sample of foreign recruits. Admittedly, countries closer to Syria and Iraq and with a larger Muslim population have more of their citizens joining the ranks of the terrorist organization. But a handful of countries with a small Muslim population, most of them in Western Europe, are the origin of up to 12 percent of all Daesh foreign recruits. 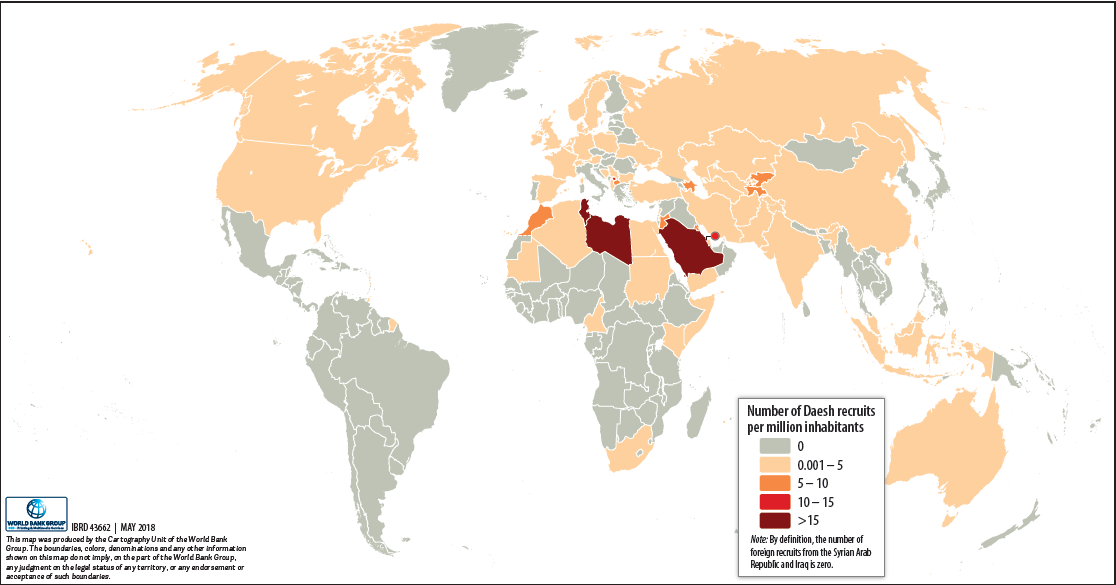 Finally, exploiting individual-level education information for these fighters, the authors link the unemployment rate among workers of a given education level and in a given country with the corresponding size of the cohort of Daesh recruits from that same education level and country. The analysis suggests that higher unemployment rates are a push factor toward radicalization, especially in countries at a shorter distance from Syria; an increase of one percentage point in the unemployment rate leads to 42 additional Daesh recruits. This is a strong effect that is found to be restricted to countries at a relatively short distance from Syria. In countries farther away, unemployment may still lead to radicalization, with radicalized individuals engaging in local acts of violence rather than traveling to far-away Syria or Iraq.

Thus the main implication of the study’s findings is that domestic socioeconomic policies have an impact on global security because disgruntled youth are susceptible to radicalization into violent extremism at home or abroad. Cross-border terrorism has turned security into a global public good, the provision of which requires policies coordinated at a multilateral level.