South Asia is experiencing an unprecedented health crisis as a devastating new COVID-19 variant has destroyed thousands of lives causing more deaths in last two months than in the entire preceding period.

The full extent of the impact of the pandemic can not immediately be discerned by national official statistics. Moreover, COVID-related health and economic effects are not distributed evenly geographically: populous urban centers have been hit harder than outlying areas. However, we can increasingly rely on other sources of data to indirectly measure the impacts of COVID-19 on economic activity.

One example may be in changes to concentration of nitrogen dioxide (NO2) in the air. NO2, one of a group of gases called nitrogen oxides, is a pollutant monitored from space-based satellites. NO2 is a gas primarily released by fuel consumption from vehicles (particularly in traffic congestion), power plants and other industrial activities. Because so much economic activity in cities depends on the burning of fossil fuels, we can estimate how much economic activity was occurring by studying patterns of NO2 concentrations.

Data on NO2 concentrations are available in near real-time from the European Space Agency’s Sentinel5-P program. With cloud-based processing platforms like Google Earth Engine, we can quickly obtain estimates of NO2 emissions across the globe. A number of studies compare NO2 emissions from before and during any lockdowns that occurred in 2020. A 2020 study of cities in Sub-Saharan Africa finds that NO2 provides a useful, albeit “noisy”, real-time proxy measure of how COVID-19 has affected economic activity. Deb and colleagues also found a clear relationship with industrial production growth and NO2 in a sample of countries.

NO2 emissions were undoubtedly down in April and May 2020 during the lockdowns, but can we detect the subsequent economic recovery and more recent shutdowns? To find out, we averaged NO2 concentrations in a circle of 20 km around 10 cities in South Asia (Kabul, Dhaka, New Delhi, Kolkata, Mumbai, Kathmandu, Quetta, Karachi, Islamabad, Colombo). We then averaged the estimated emissions within that circle across each calendar month. 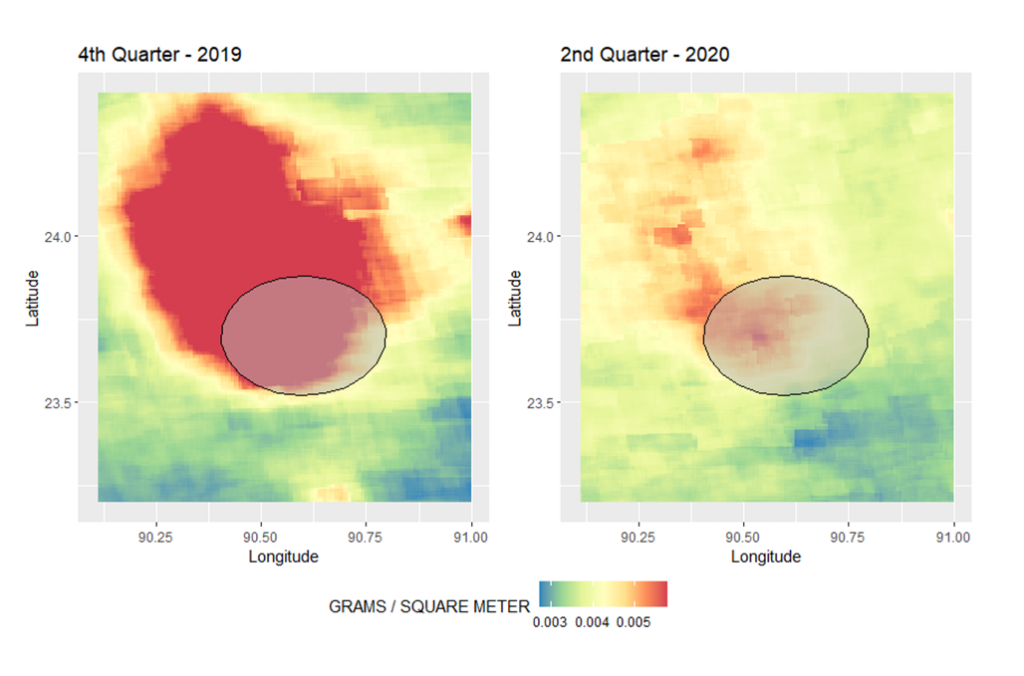 Earth Engine has NO2 data available only from August 2018, and the data shows that different cities have different levels of NO2 throughout the year. With a longer series of data, we could have better understood how normal or abnormal NO2 concentrations have been during the pandemic. As it is, because there’s not much data to work with, we compare each data point with the year before it for an ‘apples-to-apples’ comparison, but also against a ‘benchmark’ year, the period of August 2018-July 2019 before the crisis.

The figures below show the smoothed year-on-year change in average monthly NO2 concentrations in these 10 urban areas in South Asia. The dotted lines show the change against the ‘benchmark’ year, since April and May 2020 already saw full lockdowns in much of South Asia. The grey shaded sections correspond to time periods when there were national lockdowns or strict restrictions on mobility such as curfews. In some cases, restrictions were very gradually loosened or applied unevenly depending on affected localities (as represented in the faded shading). Beginning in the third quarter of 2020, most countries implemented geographically targeted restrictions. 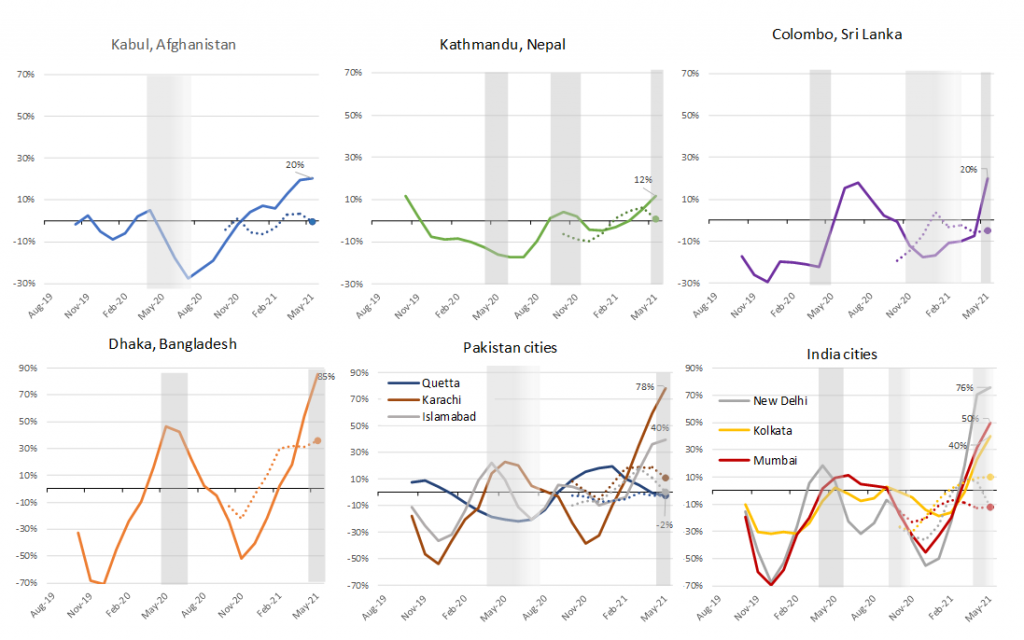 The figure confirms that NO2 concentrations in general fell during periods of restrictions, and more recently rose very quickly in cities prior to the most recent surge of COVID.  Five observations are evident.

This resumption of economic activity since end-2020 is also corroborated with data on nighttime light intensity around the geographic locations of these cities as shown in the Spring 2021 South Asia Economic Focus. By January-February 2021 nighttime light intensity showed economic activity recovering to pre-COVID levels in the geographic areas around Colombo, Mumbai, Karachi and New Delhi, which experienced the largest surge in per-capita COVID-19 cases by April-May 2021--much more than most other parts of the region.

Separately, The sharp increase in NO2 levels may also cost lives. While all of the nitrogen oxides are harmful to human health and the environment, NO2 is of greater concern, according to the US Environmental Protection Agency, because it has been linked to respiratory issues like asthma and difficulty breathing.New evidence by Zivin and others in the United States established a clear direction of causality: a 10 percent improvement in the air quality index in the United States led to a 15 percent drop in hospitalization from the main respiratory illness, influenza. In parallel, studies conducted in advanced economies find that exposure to air pollution, especially NO2 and PM2.5, increase the susceptibility of infection and mortality specifically from COVID-19. Though there is no comparable study for South Asia, air quality in urban areas is typically much worse than in the United States and COVID-19 is of course a much deadlier respiratory disease than influenza. The implication is that higher pollution levels could contribute to a greater incidence of COVID-19 in South Asia as well.