When disadvantages don’t add up: On gender, ethnicity and education

We often think that all women are in some way subjected to gender-based discrimination, and indeed, there is wealth of evidence to support this belief. The same can be said about ethnic minorities and other social groups—indigenous peoples, refugees, sexual minorities, the poor, immigrants, and people living with HIV/AIDS—who may face barriers in their quest for a better life.

In reality, though, we all have multiple identities, and our abilities, opportunities and achievements are all socially mediated by the way these multiple identities interact with each other. For instance, the feminist literature highlights that day-to-day experiences of ethnic minority women can be drastically different from ethnic majority women, although both groups fare worse than men in most outcomes. While context plays a large role in how ethnicity exacerbates gender-based divisions, such interactions often get manifested in similar ways, through systematic, cumulative achievement gaps across social groups.

In a forthcoming paper, originally prepared for the World Bank report Inclusion Matters, we study gender gaps in education through the lens of “intersectionality”. We illustrate that there is no single “ethnic minority experience” or “female experience” in educational achievement, which may seem like an obvious point at first, but one that gets overlooked in the majority of development research and practice. Specifically, we use harmonized census data for a group of Latin American and sub-Saharan African countries to explore whether women who belong to ethnic minority groups suffer from cumulative education disadvantages that neither women nor men who belong to other ethnic groups face. Our findings are quite surprising, as are their implications for policy and programmatic interventions. 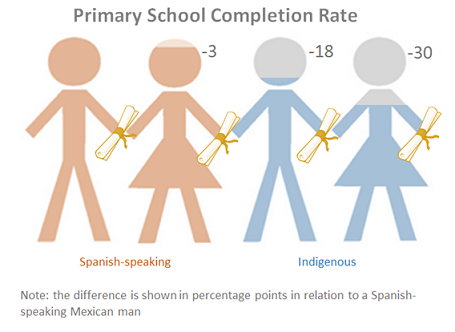 This pattern of cumulative disadvantage is not unique to Mexico, but is also present in Peru and Bolivia, as well as in Senegal and Sierra Leone, two African countries in our sample. The cumulative disadvantages can result from a combination of factors, but what is most interesting about them is the fact that they coexist with large amounts of public spending and policy efforts taken over the past several decades, especially by various Latin American governments, to universalize education. While many countries have made huge leaps in educational attainment (for example, adult literacy in Bolivia increased from 63 percent in 1976 to 95 percent in 2012), gaps for indigenous women remain. And even though in some countries there has been a ‘flip’ in educational attainment, where girls have on average better educational outcomes than boys, ethnic minority girls do not reap the same benefits.

What do cumulative disadvantages mean for policies or programs that seek to address educational inequalities? Many education initiatives at the national and global levels, including the Millennium Development Goals (MDGs) and the Sustainable Development Goals (SDGs), hold “universalization” as a benchmark. Our findings suggest that progress towards universal education may be unbalanced, and perhaps, universalization helps advantaged groups before disadvantaged ones, therefore contributing to (rather than addressing) social inequalities. In countries with further progress to make in education, there seems to be room for a “course correction” toward more carefully tailored and targeted interventions.

While implementing similar initiatives as before may risk leaving an increasing number of people behind, designing interventions that recognize and address the unique burdens that exist at the intersection of identities, may result in more inclusive education outcomes for all. I just attended the online webinar on 'Measuring Social Inclusion, which was really insightful and well organised, many thanks. The type of analysis you are doing resonates very well with our work in UNICEF Europe & Central Asia region. For instance, we have done similar disaggregated analysis about Roma children and women in three countries in South Eastern Europe, using MICS survey data, very much like in your example from Mexico. http://www.unicef.org/ceecis/Insights2014_2.pdf
It would be great to have you as guest speaker for one of our regional UNICEF webinars, let me know if you are available.

Dear Elena, thank you for your comment and I'm sorry for this belated response. I would very much like to engage with UNICEF colleagues on social inclusion issues. The link you provided on the Roma illustrates the importance of using an intersectional lens at the diagnosis stage. Please see the link below for a quick summary of the World Bank's focus on Roma inclusion: http://www.worldbank.org/en/region/eca/brief/roma. I look forward to continuing this conversation.