Why policy makers should pay attention to the concept of massive modularity: The example of the mobile telecom industry

Recently, policy makers have taken a deep interest in global value chains (GVCs), with a view to making them more resilient and robust in most countries’ post-pandemic recovery plans. A central assumption in all policy proposals seems to be that the classic GVC is the relevant unit of analysis: each “lead” firm organizes a pipeline of suppliers (its supply chain) as needed to produce a good or service. In such conventional GVCs, it is easy to identify the critical inputs and bottlenecks that create vulnerability to disruption. But in industries characterized by what we call “massive modularity”, this becomes extremely difficult.

What is massive modularity? An example can be found in the mobile telecommunication industry. Albeit simplified, Figure 1 visually represents six major modules in three broad functional areas that define a smartphone handset. The modules share common traits: (i) they are interconnected with each other according to standard interfaces; (ii) innovation can take place independently in each module, as long as the interface standard is adhered to and continually updated; and (iii) they can be broken down into smaller, more specialized modules (represented by bullet points in Figure 1), each with its own evolving standards, replicating the modular pattern at progressively deeper levels.

Massive modularity allows industries to cope with rapidly growing complexity in products and systems.  For instance, after decades of industry evolution, a single phone may incorporate decades of wireless communications standards (2G, 3G, 4G, and now 5G), be compatible with 10 or more WiFi standards, offer multiple, distinct WiFi services, and include seven or more distinct US-led GPS services, not to mention versions of the three other major non-US geolocation systems[1].  Similar structures support the evolution of Google’s Android operating system, Bluetooth, nearfield communications (mobile payment), audio, video, and many others lurking in the depths of the massively modular system (MMS) that is your mobile phone.

Over the years, the mobile telecom GVC has evolved from a standard GVC structure (with, for example, Finland’s Nokia, Sweden’s Ericsson, and the USA’s Motorola designing their own handsets and selecting suppliers) to a MMS where expertise and market share is dispersed in specific functional modules that have gradually become highly concentrated in specific companies and countries. Figure 2 illustrates the extraordinary geographic concentration in the industry across a few key functions in 2019. 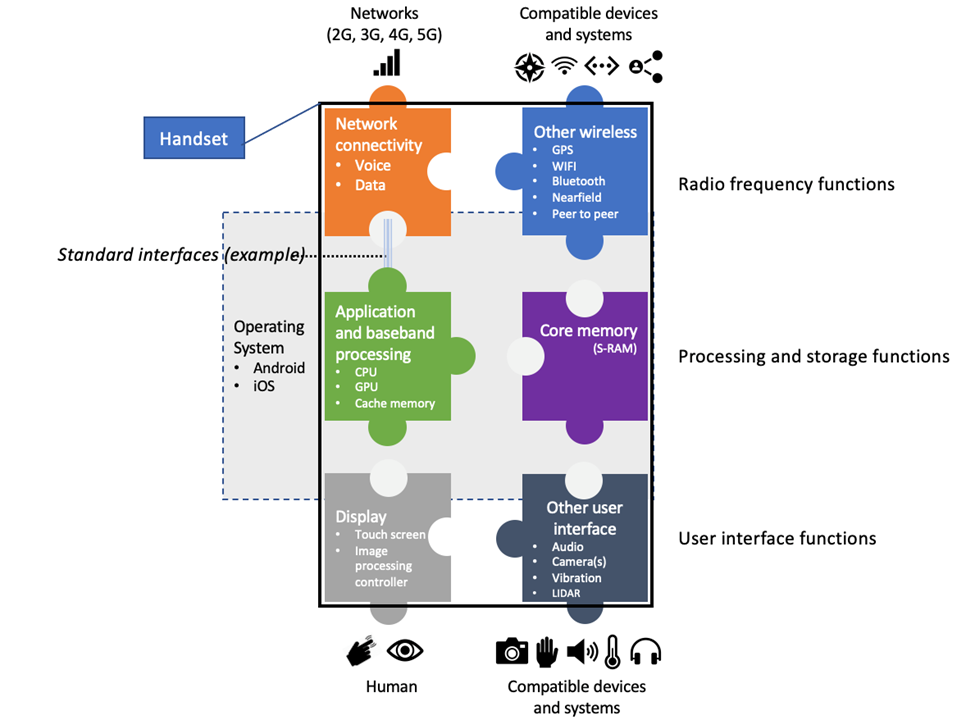 The United States is predominant in the most R&D and design-intensive ICs, such as phones’ application processors (CPU) and advanced radio frequency IC packages. The Rep. of Korea is predominant in capital- and process-intensive memory production and LCD displays. In some cases, global capabilities are focused on a single firm (Qualcomm in processors, and Samsung in memory and displays). And this is just a single layer of the mobile phone.  Opening the proverbial hood of each of these functional areas reveals new standards, dominant players, and platform ecosystems operating at lower levels. Thus, even giants like Qualcomm must stand on the shoulders of hidden giants like Taiwan’s TSMC, which manufactures many of its ICs and provides process-specific design requirements to make this possible, and the United Kingdom’s ARM, which provides the power management architecture present in 95% of mobile handsets. Tellingly, the ARM ecosystem includes hundreds of complementing firms that sell tools to make it easier for handset designers to adhere to the (de facto) ARM standard. As ICT become more important, if not core, in more industries, it appears that more industries are evolving in the direction of massive modularity.[2]

Why is massive modularity important? One reason is cybersecurity risk. Because innovation in MMS is both partitioned and constantly evolving, new modules and standards usually include “legacy” code, circuity and other features that ensure they are compatible with existing and older standards, at least at first, instead of purging them and starting from scratch. In addition, the openness of massively modular systems means that new devices and software can be added without the permission of any single gatekeeper.  While the results might be astounding, MMS typically have accumulated hundreds, if not thousands of backdoors and vulnerabilities that can be, and regularly are, exploited by bad actors. While cybersecurity risks are a special type of strategic vulnerability, and one that will require especially urgent attention, digital services are symbolic of the diverse vulnerabilities that reside in massively modular industries.

What are the broader implications of MMS for geopolitics, national security and industrial policy? First, the policy challenge is not only that vulnerabilities can surprise and disrupt, but also that policies aimed at reducing risk might have severe unintended consequences, as shocks become amplified and propagate through complex industries in ways that are difficult to predict (as Mandelbrot’s Fractal Geometry teaches us). Clearly, some options that governments are considering risk falling short of confronting the vast multi-dimensional complexity of the industries they are hoping to rebalance. Between the extremes of rebuilding massively modular industries in all their complexity on a national level, or trying to mitigate each crisis as it arises in an endless game of whack-a-mole, there lies a vast middle ground of options that include combinations of strategic buffering and recasting of international cooperation that allow for some degree of global supply chain risk, given that GVCs are likely to remain globally distributed.

But first we need to see the world as it is and not how it used to be. There is an urgent need to characterize industries not only in terms of trade and investment flows, but also in terms of IPR and asset ownership—something not currently possible with official economic statistics. It will require a new type of policy expertise to help ensure that shocks to the system are reabsorbed and not amplified. Most of all, it will require the uncommon marriage of technical and political skill to needed engage partners in the context of exceedingly complex technological ecosystems and business strategies.

For related discussion, read Massive modularity: Why reshoring supply chains will be harder than many think

[2] A recent study by the Semiconductor Industry Association and Boston Consulting Group reveals the massively modular structure of the broader semiconductor industry, with a striking pattern of geographic vertical specialization ranging from design software, to specific types of chips, to chip manufacturing, to manufacturing equipment, to specialty chemicals and materials.  Pharmaceuticals may be similar.  On May 7, 2021, the CEO of Pfizer stated that the company’s Covid-19 vaccine “requires 280 different materials and components that are sourced from 19 countries around the world.”  The example of digital services is particularly telling.  There is much talk of the dominance of the FAANG companies in this space, and these companies are huge and dominant in many segments.  But the ecosystem of digital services is truly vast and getting larger and more complex every day, so even these powerful companies are forced to pick their spots (i.e., vertically specialize, if in multiple segments).  In other words, even they must depend on a host of specialty software products and data services running in various clouds and over the internet.  The functional layers of software and hardware required to execute even the most mundane task (e.g., searching for a veterinarian near you) deploys technology and systems owned and operated by your search platform (e.g., Google), but also by hundreds of other vendors from all over the world engaged in specialized tasks such as speeding up data flows (e.g., Fastly) and keeping software updated (e.g., Solarwinds).  Many appear to have unsettlingly large market shares in their niche.