WTO’s Trade Facilitation Agreement and Doing Business reforms: Are they related and how?

Small differences in the time and cost to trade can determine whether or not a country participates in global value chains. In this respect, the World Trade Organization’s (WTO) Trade Facilitation Agreement (TFA), which came into force on February 22, 2017, is a landmark achievement given its comprehensive coverage of the issues around cutting red tape and promoting efficiency and transparency, as well as the fact that it is the first multilateral agreement since the establishment of the WTO in 1995.  Coincidentally, the Trading Across Borders (TAB) indicator of Doing Business measures the efficiency of national regulations in trade facilitation and keeps track of relevant reforms, allowing us to analyze how the provisions of the TFA are related to the reform efforts of governments around the world.

Since the inception of the TAB indicator in 2004, 119 of the 190 economies currently monitored have implemented a total of 264 reforms to improve the efficiency of trade facilities. The most commonly implemented reforms include the adoption of e-systems to enable electronic processing of trade procedures; implementation of risk-based inspections; elimination of redundant procedures to increase the efficiency of customs administration; and improvements in customs/border infrastructure. These features are also reflected in most of the 12 articles of Section I of the TFA (Figure 1). 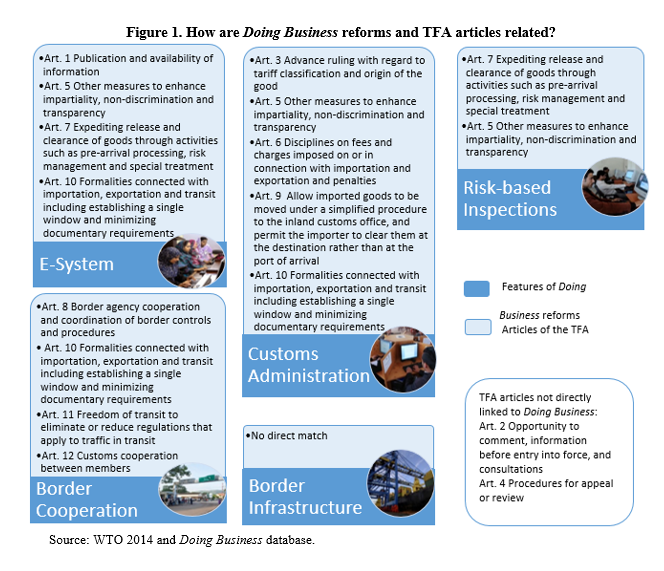 Which Doing Business reforms are related to TFA?

Drawing on the reforms recorded by Doing Business 2018, we find that reforms in line with TFA recommendations were implemented in 30 economies, of which 80% are developing economies. Article 10 of TFA is the most popular area of reform. Specifically, 20 economies streamlined the formalities and documentation requirements (Art. 10.1), 7 economies began accepting  paper or electronic copies instead of original documents (Art. 10.2) and 6 economies implemented Single Windows that enable sharing of information between trade actors through a single platform (Art. 10.4) (Table 1).

Sub-Saharan Africa carried out the highest number of reforms within the scope of the agreement, with 15 economies reforming under TFA. The case of Mauritius, which has the highest number of TAB reforms related to TFA, shows that the recommendations can be implemented fairly quickly with significant results. Mauritius is one of first economies to ratify the TFA agreement (March, 2015) and start working on the TFA agenda, even before the agreement came into force in February 2017. Since June 2016, Mauritius has allowed pre-arrival submission of the manifest and customs declaration (Art. 7.1); improved its risk-management system (Art. 7.4); reduced the use of paper copies (Art. 10.2); and started a systematic process of information sharing with other control agencies (Art. 10.4). The combined impact of these initiatives has decreased the time to comply with border procedures by 21 hours for exports and 20 hours for imports. 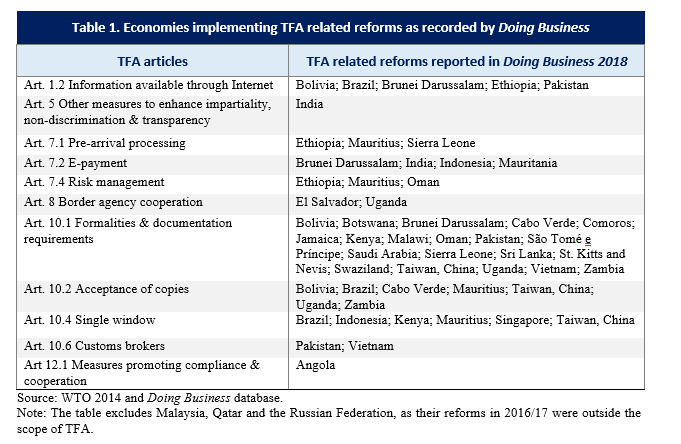 What is the impact of TFA?

The WTO predicts that TFA will promote the simplification, modernization and harmonization of trade processes to reduce cost and time, boost trade flows and increase the world GDP growth. Although it is too early to assess the full impact of TFA, the World Trade Report 2015 concludes that it has the potential to reduce trade costs by an average of 14.3% and increase exports by $1 trillion per year. Another study says that the implementation of TFA will lead to an increase in export diversification. The potential benefits are further supported by the OECD, which finds that TFA will create efficiency at the border, thereby reduce trade costs and increase participation in global value chains.

Likewise, Doing Business analyzes the impact of reforms in many areas promoted by TFA (as shown in Figure 1). Among these, Doing Business 2018 reveals that introducing or improving customs Electronic Data Interchanges and Single Windows, which are featured in Articles 1, 5, 7 and 10 of TFA, allowed a total time reduction of 742 hours. Infrastructure reforms have the second most significant impact on reducing the time and cost of trade procedures as measured by Doing Business; however, TFA is mostly silent about border infrastructure. 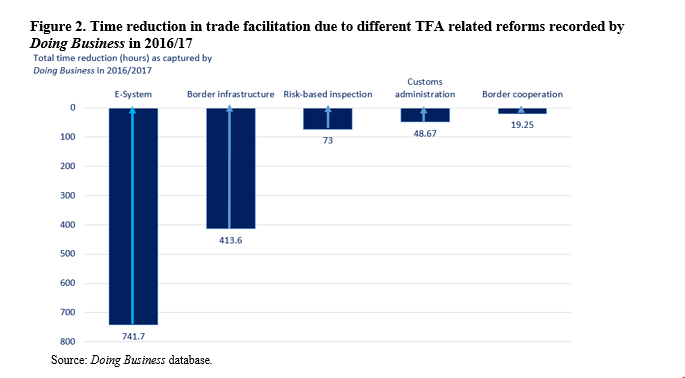 Both TFA and Doing Business point out that the future of efficient trade lies in the modernization of electronic platforms, international cooperation at both the customs and borders, efficient risk-based inspections and simplified documentary requirements. The Doing Business data confirm that implementing reforms promoted by both TFA provisions and the Doing Business Trading Across Borders indicator set significantly reduces the red tape that impedes international trade. Further reductions are expected when more countries ratify the TFA.

As more data become available over time, it would be interesting to investigate whether reductions in red tape translate into further increase in exports and economic growth as predicted by the WTO, especially in developing countries facing various types of constraints to trade.