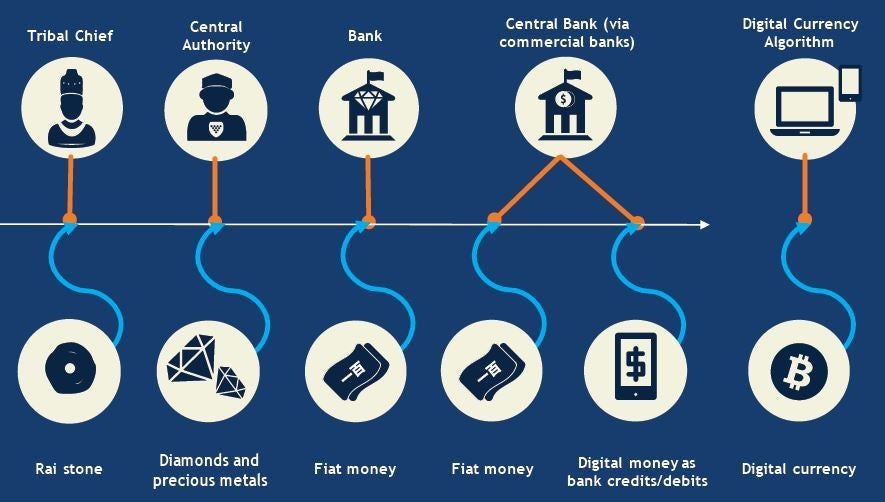 With Google Trends data showing that searches for the word “blockchain” have exponentially increased, we may be entering the peak of the hype cycle for blockchain and distributed ledger technology.

But here’s the thing: the blockchain is a major breakthrough. That’s because its decentralized approach to verifying changes in important information addresses the centuries-old problem of trust, a social resource that is all too often in short supply, especially amid the current era’s rampant concerns over the security of valuable data. It turns out that fixing that can be a boon for financial inclusion and other basic services delivery, helping to achieve the global objectives laid out in the Sustainable Development Goals (SDGs).

Sorting out hype from reality may depend on how well we identify where institutions that have until now played a role in mediating trust between people are falling short, especially in the key area of money. Deploying the blockchain in those settings to generate secure, decentralized trust could achieve great strides in inclusion and innovation.

What do we mean by decentralized trust? The concept is unfamiliar in part because its converse -- centralized trust – is something that we often take for granted, at least while it’s working. But if we look at the history of transactions since the early barter systems to modern-day digital money exchanges, we can see how different trust protocols for keeping track of our exchanges of value have evolved and how, in each case, centralizing trust within particular institutions has periodically caused problems.
​
As strategies for dealing with this challenge evolved and as the complexity and frequency of transactions grew, different trust bearers emerged. We went from relying on the memory and discretion of tribal leaders, to central governments issuing currencies in the form of precious metals, to commercial banks acting as trusted intermediaries and issuing their own bank notes, to central banks managing a hybrid system in which sovereign fiat banknotes circulate alongside a debt/credit form of money managed by regulated banks and internal ledgers.

We are now at another moment when society’s trust in the trust bearers is being challenged again. The cause: the 2008 crisis – best viewed as a breakdown in public trust in the banks’ role as ledger-keepers – and the constant reports of hacking attacks at financial institutions. The difference is that this time the entire notion of centralized trust is being questioned.

This is where the blockchain and distributed public ledgers come in. We now have the prospect of supplanting those risk-laden trust bearers with a more robust, decentralized model. This kind of ledger, shared among a network of autonomous computers, which confirm and validate its content by following a unique algorithm that compels them to act in the common interest, and secured with powerful cryptography, is essentially tamper-proof. It’s the nearest thing we’ve ever had to an “immutable” ledger.

Currency exchanges are the first use case for this technology. But the topics discussed at this past week’s Blockchain Summit on Necker Island reveal a dizzying array of non-currency applications as well. The blockchain’s disintermediating potential is being tried out for securities settlement, property titles, digital rights, trade finance, supply chains, auditing, voting, solar microgrids, notary and legal services, and the big one, digital identity. Much of this has the potential to leapfrog billions of people into a new era – in parallel to the way that mobile phones helped them leapfrog over landlines.

As with all early-stage technology, there are challenges. The underlying infrastructure needs to be scalable and more versatile, but achieving consensus to make such changes is difficult in an open-source work environment. There’s a “garbage-in” risk that inaccurate information gets permanently inserted into a blockchain. Also, the immutability and irreversibility of transactions might make it harder for individuals and firms to arbitrate solutions whenever there’s a dispute. Meanwhile, a vivid debate continues over what kind of blockchain communities should use and when: a public, “permissionless” blockchain like bitcoin, or a private blockchain in which only “permissioned” actors maintain the ledger, such as those which various banks are developing. There’s a big public interest in answering these questions.

Amid the rapid pace of open-source “fintech” innovation, it’s hard to imagine that distributed ledger technology isn’t coming, one way or another. When it arrives, the impact on society could be profound. It is therefore critical that governments engage their citizens and each other in serious discussion about the underlying trust infrastructure of 21st century digital society.

It’s too early to know the answers. That’s why it’s incumbent upon all of us to study and understand how to maximize the benefits of this technology to attain better development outcomes and reach the SDGs. The World Bank and MIT Media Lab could help foster this understanding. With serious research, we can discover the best ways to use this technology to lower costs and increase access to financial services while protecting the social capital that’s vital for economic development. Within this, we must keep in mind the unprecedented competition and challenges facing incumbent financial institutions and regulators. If we get this transformation right, and do so in a collective, collaborative manner, it could provide a vital building block for achieving the global community’s SDGs.