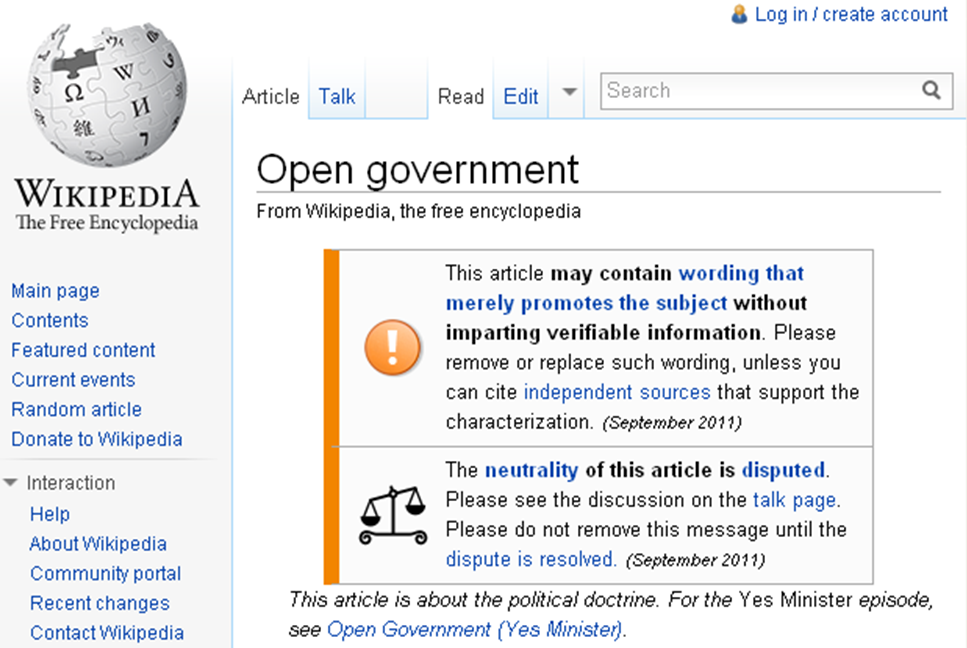 I just finished reading a very interesting paper that - in essence- discusses the ambiguities that the term "Open Government Data" has introduced in the larger open government agenda. The discussion centers around the fact that there is indeed a whole lot of data that governments can make accessible to the public in so-called "machine readable formats", and still lack the transparency and accountability that an Open Government should show, yet call the whole process an open government initiative.

This paper, very appropriately named "The New Ambiguity of Open Government"(1) provides a thorough history of the term "Open Government", and how the introduction of "Open Data" initiatives has sort of watered down its initial political significance. The authors call for a separation between the technological "Open (Government Data)", that is, data from the government being shared with the public at large, from the more political "(Open Government) Data", which is information that would in fact hold governments accountable and transparent (2). The authors also propose a framework to classify data in terms of their technological "openness" and their political "openness".

I do agree that the ambiguity is worth clarifying. After reading the paper, the following two thoughts came to me: (i) How much are we contributing to this confusion? (ii) provided disambiguation, do they really need to be treated as separate initiatives?

On the first issue, I think that at the very least we haven't been helping in making our clients understand the difference. Many of us have fallen in love with the idea and have very quickly jumped on the open government wagon with an open data concept, and to some extent, we could eventually enable some countries claim open government initiatives on the basis of limited open data. As mentioned in the paper, socio economic census information, traffic patterns, and bus schedules are great for application and content development, but don't make an open government.

On the second issue, it is probably worth mentioning that the confusion is not arbitrary. There is, in fact, quite a large intersection between the two initiatives which the authors' analytical framework dismisses for the sake of simplicity. Moreover, I believe it is that intersection between both what created the ambiguity in the first place. True, open data is nowadays more about information that can be leveraged in innovative ways through technology to improve and co-create public services, but it does not exclude by any means data aimed at making governments more transparent and accountable.

Provided a country that is indeed truly engaged with an open government agenda, an open data initiative would be the ideal first step towards a full-disclosed open government information portal. Moreover, in developing countries, the jobs, innovation, and economic growth (3) that could come out of open data could very well help incumbent governments justify the technological investments and process reengineering that open government requires for transparency and accountability.

Lastly, one "open" question: at present, can we have an Open Government Strategy without an Open Data Initiative(4)? If not, then maybe instead of two completely separate initiatives, we could see one as necessary but not sufficient for the other.

(2) It is hard to summarize a 22 page paper in one paragraph, I invite you all to read it and share your views.

(4) Even in countries with low Internet penetration.