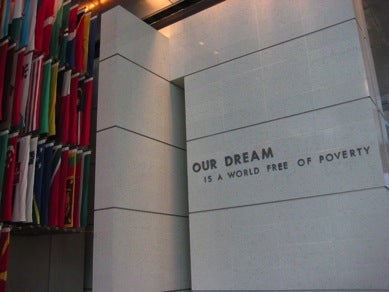 On entering World Bank headquarters in Washington, DC, the words “Our Dream is a World Free of Poverty” are prominently displayed on a wall near the main entrance. This April, the Bank moved one step closer to realizing this dream by establishing a set of challenging goals to ‘galvanize international and national efforts to end extreme poverty worldwide within a generation and to promote shared prosperity.’ The goals focus on decreasing the percentage of the world’s population living on less than $1.25 a day to no more than 3 percent by 2030, and promoting income growth amongst the bottom 40 percent of the population in each country (read more).

To tackle poverty at this scale, we need to explore new ways of doing things.  While not a silver bullet, we think information and communication technologies (ICTs) can be a force multiplier in this fight.

Digital identities can make a huge difference to the lives of the poor. For example:
In some developed countries, such as the UK and New Zealand, digital identity programs have raised legitimate concerns about privacy. Most of their citizens can be identified through official documents (e.g., birth certificates), so the introduction of an additional electronic ID raises the specter of surveillance and the state as ‘big brother’. In developing countries, however, the absence of an identity often means loss of economic opportunities for the poor.  This is a major problem: According to UNICEF, 40% of children are not registered at birth in developing countries and the figures are even higher for South Asia (63%) and Sub-Saharan Africa (55%).

To mitigate the privacy-related problems, the Aadhaar program has incorporated explicit privacy protection measures. For example, information is collected for essential data fields only, such as name, date of birth, and gender. No information is collected on religion, caste, community, class, ethnicity, income or health. Only categorical responses (‘yes’ or ‘no’) may be provided from the Aadhaar database in response to any queries on identity. Also, the database is not linked to any other databases or to information held in other databases.

Digital identities are one way in which ICTs can help fight poverty.  Our next blog post will look at other ICT solutions that can contribute to poverty reduction.
Topics
Digital Development
Poverty
Countries
India More information on the life cycle cost benefits of ICT solutions would be useful. If ICT is the answer for fiscal transfers to the poor then we should specify the preconditions that make it viable.
Nilekeni said the cost of each registration for the UID was only $1. In South Sudan a contractor (Indian) charged $10 per biometric ID. Clearly we need to establish normative costs for task teams.
Secondly, what is the minimum scale when ICT becomes viable. Do we need UID to benefit the poor in Timor Leste (population 1 million or Swaziland)?
Third, i doubt very much if the poor have "data privacy" concerns. That is very much a "rich" woman's problem.
Fourth, we should underscore that ICT is NOT the last mile. Once money reaches a poor woman's account we need to ensure that her husband, parents or elders do not force her to hand it over...as often happens.
The "mobile cash dispensers" of the "Indian work for pay schemes" may pay the right person but how do we know that the beneficiaries are able to retain the full amount and informal deductions are not being made, much as Trade Unions used to collect their membership fee at the factory gate or armed gangs collect "tax" from business and estate holders.
With ICT applications, the problems of full and accurate transfer of resources for the poor gets significantly "focused" to the end of the pipe. However, our real target is "outcomes" not "outputs" which means solving the end of pipe governance issues. Sorry but there is no short cut to that.
An intended outcome of ICT based, fool poof, fiscal transfer schemes may be that such schemes, which are politically very popular today (who doesn't like a social fund?), may fall completely out of favor as the many middlemen who benefit today from the "leaky pipes" become "digitally disenfranchised" from rents.

The end of poverty may be at the fingertips.
I would agree with the Author of the post that ICT is not a silver bullet in the fight against poverty. Other solutions to the problem exist. However, the point here is that the biometric technology dramatically changed the course of action, accelerating the falling rates of poverty in the developing countries. The poor are no longer an undifferentiated mass. Governments can now tell their poor literally by name. Thanks to the digital identities, not only do targets become known, but the cost of reaching them with meaningful programs drops significantly. As The Economist put it in its most recent issue : “Poverty used to be a reflection of scarcity. Now it is a problem of identification, targeting and distribution.” And that is a problem that can be solved.
The Bank is engaging with the client governments in addressing this issue. For example, a recent mission to Djibouti on setting up a robust Social Safety Nets (SSN) program concluded that the country has to first strengthen its targeting and identification mechanism. The decision of establishing a national (e-ID) registry has been taken, followed by a broad consultation with the private sector/solution providers. Indeed, as Sanjeev Ahluwalia mentiones (below), the proposed price tag can vary from $1 to $10 per biometric ID. And in a country like Djibouti, that has less than 1 million inhabitants, scale is a major cost factor. But the intractability of the scale metric should not prevent the Bank from embracing a technology that enables social programs to be better targeted and improved. From this perspective, digital identities have helped transform the problem of poverty. Poverty is becoming more of a social or cultural problem (like in the case where the poor women have to hand over the benefits she’s entitled to). If poverty is something that can be identified and studied at this level, then the Bank can ramp up its efforts on women’s education and empowerment front. The problem is redefined and the results become more achievable.
While the intention is not to be overly optimistic about the e-ID potential in ending poverty, the success of UID in identifying and targeting the poor in India is something to really strive for. Indeed, with millions of Indians pushed through the $1.25 barrier, the subcontinent is likely to generate the biggest gains in global poverty reduction in the next decade.