Aging in Thailand – How to live long and prosper 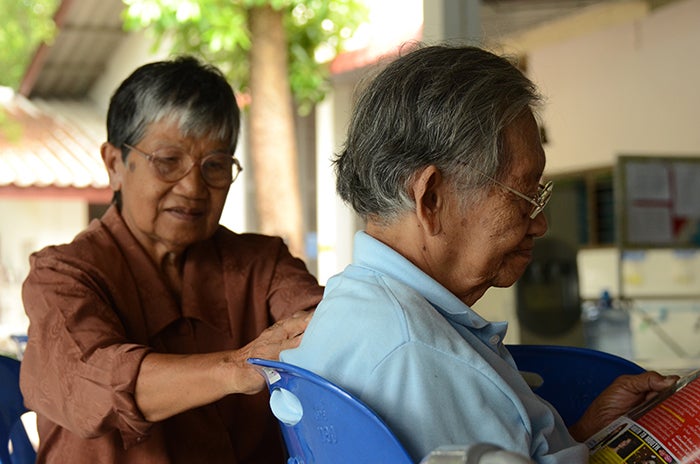 Asian societies are aging, and Thailand is aging rapidly. Already over 10 percent of the Thai population, or more than 7 million people, are 65 years old or older. By 2040, a projected 17 million Thais above 65 years of age will account for more than a quarter of the population. Together with China, Thailand already has the highest share of elderly people of any developing country in East Asia and Pacific, and it is expected to have the highest elderly share by 2040. A recent World Bank report, Live Long and Prosper: Aging in East Asia and Pacific (pdf), discusses aging in Asia and how countries can address the resulting challenges, and take advantage of emerging opportunities.

In many ways, aging is a consequence of longer life expectancy due to development success in Thailand:  people live longer, and fertility has come down rapidly from the unsustainably high levels of earlier decades. However, every success brings new challenges and aging is no exception. For example, the size of the working age population in Thailand is expected to shrink over 10 percent by 2040. Thailand has exhausted its “demographic dividend”, and future growth and improvement in living standards will largely come from increases in productivity. In addition, households headed by elderly Thais are twice as likely to be poor as those in their 30s and 40s, and in most cases are not covered by formal sector pension schemes.

Thailand and some other developing Asian countries are “getting old before getting rich”, so the potential of the state to manage rapid aging is more constrained than in today’s developed countries, which grew rich while their working age populations were still growing. At the same time, Thai people’s expectations are high. In a recent survey across Asia, two thirds of Thais said that they expect the state to be their primary source of financial support in old age. Across the world, balancing such expectations with fiscal feasibility has involved a sustained role for non-state financing of services and benefits for the elderly. Thailand is likely to be no different.

What can Thailand and other aging societies do? The first step is recognizing that rapid aging is not just about old people. It concerns everybody. A broad range of policy reforms and behavioral changes will be important to address the challenge. This starts from policies which influence how families make decisions about having children, and strengthening public support for child care and related polices to balance work and family life. It continues throughout working life with enhanced need to promote adult learning, and reforms of labor and taxation policies to promote long and productive working lives, as well as migration policies to attract young workers. Reforms will also be needed to ensure that social security, health and long-term care systems achieve wide coverage and adequate financial protection for the elderly, while ensuring that public spending remains sustainable.

We know from the experience of rich countries in Asia and in other parts of the world that societies take time to make the changes to address aging. For example, like other aging societies, Thailand will need to increase its official retirement age in line with rising life expectancy, both to increase labor force participation among urban Thais and to keep public spending within affordable limits. There is good news for Thailand, however, when considering aging. First, many Thais already have long working lives and work well beyond the ILO definition of “working age” of 64 years old. Second, the Thai healthcare system has undergone reforms in areas like how health providers are paid which puts the country in a better position than most countries to manage the healthcare needs of an aging population. Third, social pensions in Thailand provides a floor of financial support for older Thais, albeit a modest one presently.

Aging across Asia may also present new opportunities for Thailand. Demand for medical tourism for example should increase, and Thailand is well placed to capture a solid share of the growing market. Similarly, it is likely to see increased demand for affordable retirement among elderly from other parts of the region. And Thai elderly people themselves will offer new market opportunities in sectors such as health and aged care, financial services, technology, and robotics.

Undoubtedly aging poses new challenges for Thailand in sustaining growth, managing public finances, and supporting living standards. Thailand’s government, employers and workers, and families have the opportunity to take a comprehensive approach to managing rapid aging and thus achieve healthy and productive aging. In this way, Thai society as a whole can live long and prosper.

Visit the World Bank website at www.worldbank.org to read the report, Live Long and Prosper: Aging in East Asia and Pacific.

A version of this blog was printed in the Bangkok Post.
Topics
Social Sustainability and Inclusion
Countries
Thailand
Regions
East Asia and Pacific Increase the retiring age is one thing but no employer will employ them.
Take an example, I am 56 now and trying to get a job after spending 15 year in china.
In singapore we are allowed to work up to 67 but I had no offer.....

Thanks James for the comment. The attitudes of employers indeed matter a lot in ensuring that employment opportunities for mature workers are available. In many parts of the world, there is some bias among employers against older workers. The global evidence presented in our EAP regional report suggests that the picture on the age/productivity profile of workers is not straightforward, and also varies according to the nature of skills. So-called “crystallized skills” based on experience and verbal abilities tend to be higher in older workers, while “fluid skills” of problem solving, learning and speed tend to be higher in younger workers. The global evidence suggests that older workers are equally or more productive than younger workers. This suggests an agenda in EAP and other ageing countries on education of employers and workers across the age spectrum to reduce potential age-based workplace discrimination.

The subject of retiring age is totally connected with state /country laws and if the retiring age of employee goes demanding for extension that should be followed but legislation in this regard to be enacted which is a prime condition : Retiring age is not universal law ,there are divergence in laws of various countries and this factor is depend upon of mental and physical state of body : Survey says if that the natives of particular country are physically and mentally fit to perform their duties in the extended period of age then amendment can be created in state /country laws ,on the basis of survey legislative body can enact the law upon retiring age

Thanks for your feedback. We agree that retirement ages are specific to the context of specific countries. Legislative changes will be a vital part of any reform of retirement ages in the formal sector (for the informal sector, retirement ages adjust already, as people work longer to continue supporting themselves as they live longer). Globally, a growing practice – and one which seems sensible both from a labor market and a fiscal perspective – is to link the official retirement age in some way to the increase in life expectancy. At least 20 OECD countries have already done this in different ways.

Sad to see in an otherwise thoughtful blog another appearance of the "growing old before growing rich" argument. Rich countries don't necessarily have a better record of addressing ageing than less affluent ones. At any stage of development its a case of putting the right policies in place soon enough - as the blog rightly says. Don't lets allow "old before rich" to be used as an excuse for not doing the right things. What Thailand is doing other countries can also do.

Thanks for the comment. As several EAP countries, including Thailand, are aging at lower levels of GDP per capita than now developed high-income countries, a question arises as to what “the right” policies might be for countries at different levels of development. For example, with revenue to GDP ratios of 20-30 percent of GDP in a number of developing EAP countries, the fiscal capacity of the state to provide generous pension or aged-care benefits is likely to be more limited than in OECD countries with revenue to GDP ratios of 40-50 percent of GDP. Countries in East Asia and the Pacific region can learn from the lessons of OECD countries, which made entitlement commitments they can no longer afford as their populations age. Balancing a more effective role for the state with fiscal and administrative capacity and the needs of older people in EAP will be a tough challenge. Over time, global experience suggests that developing countries will spend more on social security, healthcare, and aged care as they get richer and age. The report points to the lessons for other developing EAP countries from measures that Thailand has already taken in areas like social pensions and healthcare.