Xiaoming was born in 1991 in a remote village outside the megacity of Chongqing, China. Like most families in her village, she was brought up by her grandmother. Her parents, who started working in an inner-city factory when she was still a baby, sent 1,000 Yuan (US$140) a year to her grandmother - enough to cover her expenses. Her parents visited her once a year during the Chinese New Year, bringing her new clothes as part of the celebration.

Very early on, Xiaoming knew that the only way to climb out of poverty was to work hard and have a good education. Now 28 years old, she graduated from a vocational school in Chongqing, and has stable annual income, and recently bought a flat in the city and has travelled on holiday overseas.

Xiaoming’s journey reflects the wider transformation of Chongqing – one of the world’s largest cities, with 30 million people and land mass almost equivalent to Austria. In 1996, Chongqing’s per capita GDP was US$550. Twenty years later, it has grown 14 times to almost US$9,000, and the city has transitioned out of heavy industry: one in three laptops worldwide are produced in Chongqing.

This growth mirrors China’s. As the country transitions from a high-GDP-growth-model to quality and sustainable growth, Chinese cities, such as Chongqing, have a critical role in achieving this transformation. 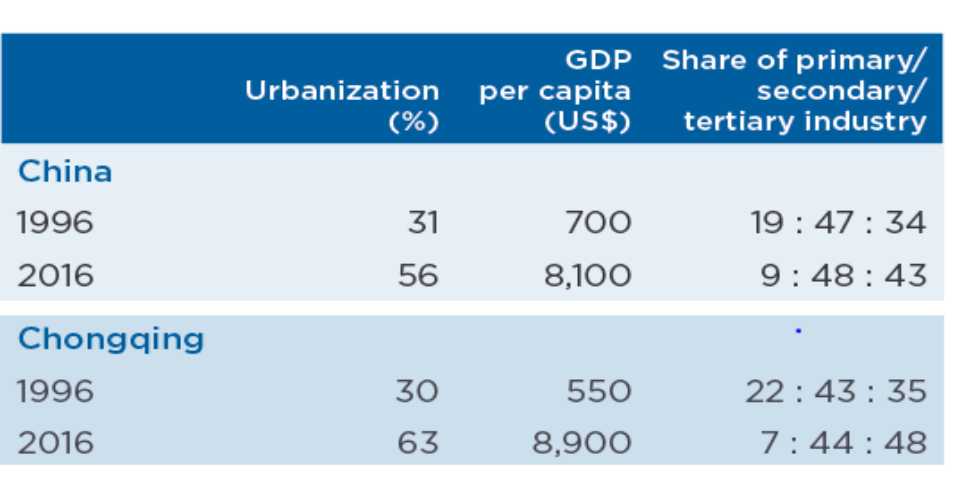 The next two decades

China’s remarkable urban and economic transformation will have significant impact on the sustainability of our shared urban future. Following the report Urban China – Toward Efficient, Inclusive and Sustainable Urbanization, the World Bank started working with Chongqing and other megacities such as Shanghai to identify unique urban challenges and opportunities.

The Chongqing 2035: Spatial and Economic Transformation for a Global City report, prepared  in collaboration with Chongqing Productivity Center, looks at how the city can move up the value chain to become a global city that is economically competitive, environmentally sustainable and socially inclusive. The report uses a set of indicators to benchmark Chongqing’s development against cities like Singapore, Seoul, and Tokyo. An Urban Growth Scenarios report further compares the implications of the current spatial planning strategy with a more compact and transit oriented development model.

For example, Chongqing’s much higher per capita carbon emissions and energy consumption per unit of GDP compared with Seoul and Tokyo are not only because of the city’s heavy reliance on fossil fuels, but also due to its inefficient urban form.

For over 20 years, Chongqing has rapidly expanded in a low-density pattern with land consumption growing almost twice as fast as the increase in population. Chongqing’s urban population density and economic density have decreased substantially, negatively impacting urban productivity and overall competitiveness. This expansion has been dominated by super-blocks, which has reduced walkability, increased congestion and pollution by encouraging car use, and undermined the city’s vibrant street life. 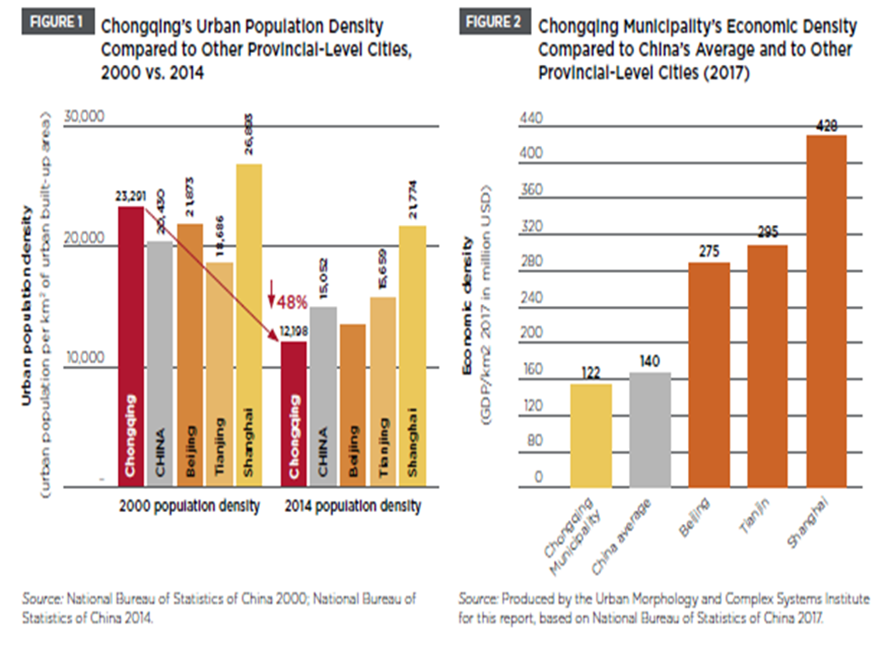 If the city adopts a compact and transit oriented development (TOD) model, Chongqing can preserve its valuable land reserve, save infrastructure costs by more than 30%, and reduce CO2 and air pollution from car travel by 39%. This win-win scenario will promote economic growth, improve livability and achieve environmental sustainability. Encouragingly, Chongqing, like many other Chinese cities, has already embarked on its transition to a growth model that focuses on improving quality of life and livability.

The report recommends a series of actions, including:

When asked how she envisions the future of her city, Xiaoming said, “When I was little, my dream was to work in a city. Now I travel to cities in other countries; I feel, on the one hand, very proud of my city – the roads and trains are almost as good as theirs. But, on the other hand, I envy their blue sky and clean environment, and that people can walk around easily and have good access to parks.”

Getting Chongqing’s urban strategy right is crucial. It will not only support the city’s ability to achieve a sustainable future, it will also ensure it is able to retain and attract talented people like Xiaoming, ultimately improving the city’s long-term competitiveness.

The Chongqing 2035 report identifies key pillars to achieving the city’s vision for sustainable transformation. Click on each block if you’re like to read more on each topic.