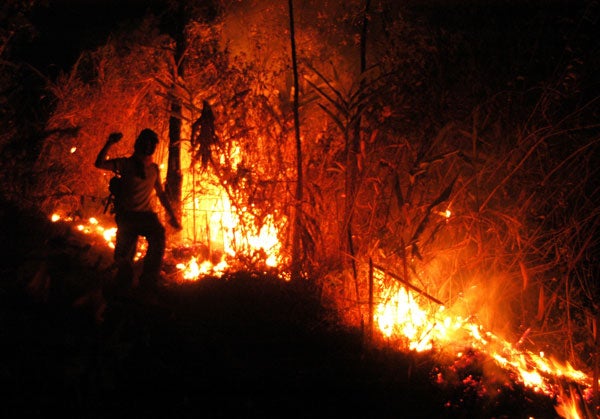 Forest and land fires making the news in Indonesia is nothing new. But a hostage drama in the middle of “fire season”? That’s a new twist, and indeed dominated headlines in early September. After collecting evidence of burned land within a palm oil concession in Rokan Hulu, Riau, seven inspectors from the Ministry of Environment and Forestry (MOEF) were taken captive and violently threatened to handover or delete the gathered evidence.

Only a few days later, the head of the Peatland Restoration Agency (Badan Restorasi Gambut or BRG) was forcefully prevented from entering lands managed by a prominent pulp-and-paper concessionaire in Pulau Pisang, Riau. BRG was investigating reports of alleged illegal conversion of peatland.

Both incidents illustrate how divisive the fire issue is, particularly at the local level. The incidents also illustrate that despite political will and improved efforts to contain the fires, without an overarching and enforced fire policy, fires will continue to smolder.

Forest and land fires are now an annual man-made event. Some 2,356 hotspots were detected in Sumatra and Kalimantan between January and August of 2016, and fire-prone provinces of South Sumatra, Riau, Jambi, and parts of Kalimantan have declared emergency fire status. This is a significant improvement from last year, thanks largely to a wetter La Niña-induced dry season; the number of hotspots have dropped by over 74% compared to 2015.

Government has taken action that includes the moratorium on peat swamp conversion and the ban on new oil palm licenses. The establishment of the BRG in January 2016 is a particularly bold move, as President Joko Widodo set an ambitious target for the agency: restore two million hectares of degraded peatlands. Environment and Forestry Minister Siti Nurbaya has also pursued legal action against those suspected of starting fires.

More efforts are underway to curtail future fires. The BRG has made important progress on mapping Indonesia’s peatlands, the first step in effectively protecting and regulating them. Early warning systems are being strengthened to detect hotspots and process information for fire suppression. Meanwhile, the MOEF is working with local governments to improve fire awareness. Crucially, controlling fires now involve communities working side-by-side with the MOEF fire-fighting teams called Manggala Agni, which patrol and extinguish fires regularly.

These are all important efforts towards a common goal. But despite increased cooperation among local government and law enforcement, communities, and the private sector, there is still more to be done. There is no overarching fire policy. Institutional responsibilities are unclear. And smallholders still struggle to find economically feasible alternatives to fire.

Why does having an overarching fire policy matter? Because right now, the many agencies with mandates that cut across fire prevention and management -  including the MOEF, the Agriculture Ministry, the Home Affairs Ministry, the Disaster Mitigation Agency, the police and military – are not clear about their roles and responsibilities, nor the sequence in which they need to take action.

Because right now, partly due to insufficient incentives, planning, and resourcing for agencies to work together comprehensively, coordination between the MOEF, the BRG, and other agencies remains weak.
Because right now, safe use of fire is not effectively encouraged.

Strong opposition by some local stakeholders also prevent the Manggala Agni teams -- or other public officials like the hostages –  from effectively taking on those intent on burning to clear land, be they smallholders or company-linked. An overarching fire policy should also address the root drivers of fire.

Among these drivers of fire is mismanagement of lowlands and peat. Intact forests and peatlands must be conserved, and feasible alternative livelihoods supported. As the BRG focuses on rewetting drained peatlands to prevent burning, those long-term solutions still need attention.

Another driver is lack of clarity on land boundaries, which impede the government’s enforcement efforts. This issue can be resolved by the One Map policy, which is making slow - albeit important – progress.

An overarching fire policy should also strengthen early detection systems to rapidly identify at-risk zones. Once those areas are identified, first responders must know their role, and have the skills and equipment to respond.

Communities, the private sector and local government should understand, and be given training and incentives, to manage and control fires. All of this requires knowledge, funding and leadership.

International development partners are working with us in trying to establish a platform to address these complex challenges, linking and integrating efforts and resources across sectors and geographies.

Given that the economic toll of Indonesia’s 2015 fires reached $16.1 billion -- almost twice the total cost of the tsunami reconstruction – such an ambitious response is warranted.

Imagine the same amount spent instead on poverty reduction. 60 million Indonesians living in and near forests suffer from poverty rates double the national average (in addition to recurring haze). Imagine those billions going to improving social services and infrastructure. Ultimately, controlling the burn is about more than managing forest and land fires. It is an imperative to bringing Indonesians a better quality of life and a brighter future. E.xcellent article. Very persuasive Good luck on what sounds like a huge undertaking.

Source request. How are "costs" "economic tolls" and costs of reconstruction calculated for forest fires. When replacement of everything or acre of trees burned does not necessarily happen or needs to happen. A large portion is probably personnel cost if emergency management action plans are not in order.